In the middle of my earlier article on Buddhism and/or/as/vs. vegetarianism, I offered the following example in passing:

"…the Ucchaṅga Jātaka tells the story of a woman who is asked to choose between saving her son, her husband and her brother, if two of the three were to be executed.  She chooses to save her brother, on the grounds that "the two others were replaceable" (Malalasekera, q.v. Ucchaṅga).  Let us be very clear: this was a story written primarily for the purposes of entertainment, and nobody in their right mind would surmise that the Buddha set down as a rule/principle that that you ought to save your siblings and let your spouse and husband die in such circumstances.  Such an attribution to the Buddha (or even to "Buddhism" more generally) would be absurd; and such absurdities are now normal, partly because of the over-arching misunderstanding of what the structure of the canon is, and where we need to look for the answers to various types of questions."

This anecdote (paraphrased above from the Ucchaṅga Jātaka) appears in the Histories of Herodotus, Vol. 1, book 3, part 6.

The striking difference between the two accounts is in the context (not the content) of the story.  Whereas the Buddhist Jātaka has the quality of a fable (along with a happy ending and some sort of a moral to the story) the version that Herodotus preserves for us is presented in all seriousness, and is notably lacking the happy ending.

Herodotus tells the tale as a real historical event that transpired when the Emperor Darius was consolidating his power, and exterminating the extended family of a potential rival to the throne (whom he suspected, rightly or wrongly, of rebellion).  In that context, it ends with the woman saving her brother's life, and the rest of the family being executed, with her offering the same explanation as to why she made the decision: she could find another husband, and thus have another child, but she is incapable of replacing her brother.  As with the Jātaka story, the emperor in question is impressed by the woman's logic, but Darius merely grants her the life of one son as a bonus (i.e., in addition to sparing her brother as requested) --and so the Greek tale lacks homiletic character of the Jātaka fable. 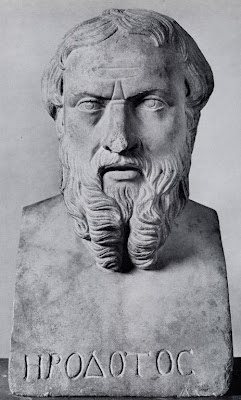 You can read the passage of Herodotus's text in English translation here.

I doubt that I'm the first to point out this particular correlation, but I did just discover it myself by happenstance (and apparently Malalasekera was unaware of the connection, if it had been observed before his time).  The letters-to-the-editor of 19th century journals were full of observations of this kind (sometimes from officers of the British Empire in India, etc.) reflecting the fact that so many of the people working on Ancient Indian literature were educated in Ancient Greek.

Sept. 6th, 2012, Addendum.  Although I wish I could report that someone had sent me this citation by e-mail, I did in fact dig it up myself.  Apparently the first person to observe the resemblance between the two texts was C.H. Tawney (b. 1837, d. 1922), whose brief mention of it in an 1883 publication alludes to another article on the same subject that was earlier still: "A still more curious parallel between Herodotus and the Játaka book is furnished by the story of Intaphernes (Herodotus III, 118, 119).  This is, as I pointed out in the Indian Antiquary, to be compared with the Ucchanga Játaka, No. 67."  The citation: C.H. Tawney, 1883, "Indian Folklore Notes from the Pali Játakas…", The Journal of Philology, Vol. 12 (?), p. 121–2.
Posted by Eisel Mazard at 19:42