When Statistics are Junk: a Study of Religion and Atheism Worldwide

If the social sciences are at all scientific, we have to admit, bluntly, when we're looking at junk science.  I am going to argue (briefly) that a recent poll on religion and atheism (that managed to grab headlines) is junk. 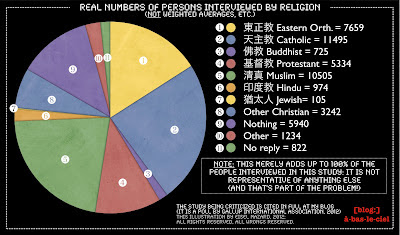 The case is not hard to prove.  The study states that they interviewed 51,927 people worldwide.  It also states misleadingly, that, "In each country a national probability sample of around 1000 men and women was interviewed" (p. 7 of the press release).  If that were true, we would have an absurd situation: how could 1,000 interviews be equally representative of Lithuania and the People's Republic of China?  Indeed, how could you even conduct research with the same methods in the (starkly different) political conditions of those two countries?

That's right, just 500 interviews are supposed to represent the religious diversity of the country, from Xinjiang (新疆) to Shanghai (上海), and have a reasonable level of statistical significance for a population of well beyond one billion people.

On this basis, they offer the absurd claim that China has the highest rate of atheism in the world (47%).  Perhaps the readers of newspapers would take this claim less seriously if they realized that this generalization is based on only 500 interviews --half as many as the company had used to represent the tiny population of Lithuania.

It is absurd, and this is not the only absurdity.  The press release very casually mentions that the interviews in some countries were conducted by telephone, in some face-to-face, and in some they were merely an online survey!  Fully 10,376 of the surveys were internet questionnaires: this data would not in any way be comparable to the other methods described.  Among other serious forms of bias, of course, is the fact that you would only get replies from people who use the internet (!) and who are comfortable reporting sensitive information over the internet; this excludes the average man in your average poverty-stricken totalitarian regime.

Some of the other categories are self-evidently absurd as well: the total number of Jews interviewed (in the entire world!) was only 106.  If someone offered generalizations about Judaism in England on the basis of merely 100 interviews, people might look askance at it, although the number of Jews in England is relatively few; in this study, instead, we have claims made about Judaism from Texas to Tel-Aviv, being made on the basis of only 106 interviews (and I do not know how many were by telephone, vs. internet, etc.).

The number of Buddhists interviewed (in the entire world) was a total of 725.  I do not know how many hundreds of millions of Buddhists there are on the planet, but 725 persons would be an extremely small percentage of them, and certainly incapable of representing even the diversity seen from Thailand to Taiwan, let alone from India to Japan.  The number of Hindus whom they interviewed was a similarly puny 974 persons (and, again, we are using the term "interview" very loosely, as I would not normally count an online form as an interview).  There is no basis whatsoever for any generalization about the state of these religions in this study.

Why is it that journalists (reporting these numbers as matters of fact) did not see any of these warning signs?  This is junk science, and the conclusions do not deserve to be taken seriously by anyone.  (Links to examples of the source being cited as factual: (1) in the Washington Post, (2) by the BBC, and (3) by the Ottawa Citizen).

How about China?  Can we even express the same equation as a percentage?

Interviewing 500 people out of 1.344 billion equates to 0.000037% of the population.  That would round off to zero.  Even if the best methodology imaginable were used, this would be insignificant --and there are serious warnings that the methodology was in fact inconsistent and (in my opinion) deeply flawed.

Full citation of the study: Gallup International Association (not related to Gallup Inc.), "Global Index of Religiosity and Atheism, 2012", Press Release.
Posted by Eisel Mazard at 13:52

Email ThisBlogThis!Share to TwitterShare to FacebookShare to Pinterest
Labels: The politics of religion, The Politics of Social Statistics, The religion of Politics
Newer Post Older Post Home