Religious Identity in the Canadian Census 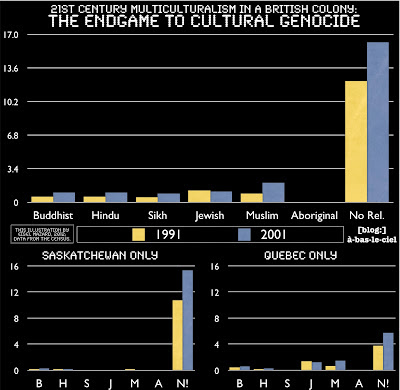 * [The meaning of the word "constitution" is debatable: the document in question is actually called "Schedule B of the British North America Act", and it was, along with its prequel, an act of British Parliament.]

Although the disadvantages are numerous, the lack-of-a-separation between church and state entails that our census does report on religious identity (unlike the American government's census, that refuses to ask the question as a matter of principle).

If you're expecting to see the numbers from the 2011 census data, you may be waiting a few years yet.  The findings are "rolled out" in a series of thematically-specific reports.  The data on religion from the 2001 census was published in May of 2003; the publication of the 2011 results (pertaining to religion) are not yet on the docket for 2012.

The most striking thing about the data that I'm looking at is the near-zero rate of reporting for aboriginal religion (or First Nations "traditional religion", or whatever term we might apply).

In the year 2001, the only province or territory with a non-zero value for "Aboriginal Spirituality" was the Northwest Territories, where this category amounted to only 0.6%.

It is astounding to see an absolute zero for this category (or any equivalent category) in provinces like Saskatchewan, that have large populations identifying as First Nations (but not, apparently, identifying their religion as such).  Part of the reality here is that a very large proportion of Canada's indigenous people do identify themselves as Christian (with invidious divisions between Protestant and Catholic contested between communities, and sometimes within them).  In Southern Saskatchewan, I note, even the Mormons have made some efforts to convert the Cree and Saulteux, and I heard a few verbal anecdotes indicating that they have had at least a few converts so far.  Another part of the reality may be "survey fatigue", as the census has very specific questions for self-identification as aboriginal, including specific band association (i.e., a greater degree of specificity than for other ethnic groups).

There may also be a significant cultural difference between the expression of indigenous identity (qua religious identity) in the U.S. and Canada in the 21st century.  It will be interesting to see if these numbers remain at zero when the 2011 findings are published.

Unlike the U.S. data (that separately counted atheist, agnostic and "no religion") the Canadian data presents just one vague category of "no religion".  This has been re-enforced by having a check-mark box for the value of "no religion", in contrast to a blank line to write in any other religious identity as a noun of the respondent's choosing.  This standard continued in the 2011 census (see illustration).  In a sense, this precludes the possibility of diverse self-identification as various shades of "atheist", etc., and encourages the respondents themselves to subscribe to the category offered (if their religion does not correspond to the type given in the list of suggested identities on the left-hand side of the form).

Of course, an even more fundamental assumption predetermined by the wording on the census form is that each person can have only one religion.  In many cultural contexts (Taiwan, Korea, Japan, etc.) the opposite is true; we cannot guess from the census data to what extent the opposite might be true in Canada.  The reality of having more than one (simultaneous) religious identity can (and does) extend to people having multiple marriage ceremonies, and even multiple funerals.  Currently, this remains outside of the remit of the census.

The headline-grabbing story that emerges from the census data is that "no religion" has increased significantly across the country, and also that it varies significantly between provinces.  In the bottom half of the first illustration, you can see that Saskatchewan is significantly more secular than Quebec; however, Quebec itself also has a significant increase within the "no religion" category.

The other story, here, is that Canada is much more Catholic than it is commonly imagined to be: Catholicism is the single largest religion in Canada (43% in 2001) and this is not only for historical reasons, but is also re-enforced by ongoing patterns of immigration.  New immigrants who had arrived (in Canada) between 1991 and May of 2001 were only 4.6% Buddhist; 23% identified as Roman Catholic, the single largest religion amongst new immigrants, with Muslims constituting 15% by contrast.  However, new immigrants were also very frequently secular: 21.3% opted for the "no religion" category.

Without digressing into specific denominations, it is no surprise to anyone living in Canada that "mainstream protestantism" has been on the decline, coeval with a number of small sects increasing their numbers.  Roughly aggregating all protestants together, their share of the population declined from 35% (in 1991) to only 29% (in 2001).  I say that this is done "roughly", for several reasons, one of the most striking being that (in 2001) a statistically significant 2.6% of respondents identified as "Christian", with no further denomination or identification.  The decade's decline in the number of protestants would be much less dramatic if we were willing to assume that this further category was largely comprised of "misc. protestants" --or even if we were willing to assume that half of this category was protestant.

Contrary to many inflated claims that I have seen around the internet, Buddhism is not now (2001) and never has been a numerically significant religion in Canada; both its absolute size and its growth (1991–2001) are puny relative even to Islam.  As we should see the 2011 data within a few years, it might be interesting for anyone to take out a bet on whether or not these trends will continue.

The establishment of Buddhism in Canada (such as it is) has transpired in the shadow of war: the relocation of refugees (and wartime allies) created in the 20th century's wars in Asia brought Buddhists to Canada (the arrival of our Lao and Cambodian populations were very directly linked to that chapter of history, and do not reflect a constant form of economic migration; there have been several academic studies on the phenomenon, e.g., Penny Van Esterik, 1992).  The wars of the 21st century, following a familiar pattern, are now relocating Muslim populations to Canada.  I hear this discussed in a rather strange voice on C.B.C. radio, as if the broadcasters are not quite sure what angle to put on the fact that both refugees from Afghanistan and former allies/employees of the Canadian military are applying to permanently relocate to the country, and openly state that their families would be targeted if they remained in Afghanistan.

As with the evacuation of forces from Vietnam in the 1970s, there's an implicit recognition of military defeat if it is (in fact) impossible for the supposed conqueror's allies to remain in the country that they have allegedly conquered after the conquest is complete.  If (e.g.) the men employed as translators for the Canadian forces would be in danger if they remained in their countries of origin, this is a reasonable indicator of the extent to which Canada not only "lost the war", but has also created enduring hostility, and the conditions for civil war to ensue thereafter.  I do not think that this transfer of population will be from Afghanistan only, and I do not think that the full extent of it will be captured in the 2011 census (i.e., there will be a lag, for many years after the conclusion of the war, as with refugee camps on the Lao border continuing to send "evacuees" to the U.S. and Canada for a period of decades after the military had withdrawn, etc.).
Posted by Eisel Mazard at 12:27