If you compare the image above to the images below, there are many differences of iconography, but, perhaps first and foremost, we might notice that one depicts the Buddha as bald whereas the other depicts him with a full head of hair.  They're both contemporary Mahayana images, produced by exactly the same Buddhist organization: Tzu Chi (慈濟基金會) based in Taiwan's coastal city of Hualien (花蓮). 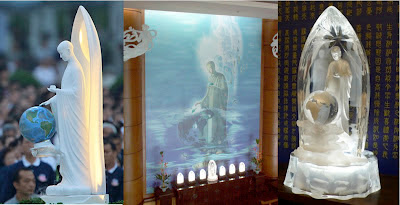 I mentioned this in some of my earlier writing, but never put the photographs together to make the point clear.

The mosaic from the hospital wall (here shown as photographed by the semi-anonymous Sue W., with due credit to her) is presumably several decades earlier than the gleaming, bald image that radiates magical rays down onto a representation of the globe.  The latter image is now apparently known as 宇宙大覺著, and, contrary to some of the explanations I've seen scattered around the internet, what I was told (by a tour guide at the Tzu Chi headquarters in Hualien) was that this depicted "the Buddha healing the world", and related to the institution's (current) ecological mandate.

That mosaic, however, already presents a significant challenge to Mahayana tradition, by depicting the Buddha with naturalistic hair, and a non-supernatural cranium in general.  The mosaic looks much more like modern images that you would see in the Theravāda world, including the style of the robes and the (apparent, if non-specific) ethnicity of all the monks shown (including the Buddha himself) in ancient India.

I have previously explained that the Buddha really was described as bald in the ancient, canonical accounts pertaining to him, and that the timeline of later beliefs arising (about supernatural hair, a supernaturally deformed skull, etc.) is not at all mysterious --however, many people would pretend to treat this history as if it were mysterious, because the earlier sources contradict the later ones.  The canon does contain some very human, down-to-earth descriptions of the Buddha, in which there is nothing supernatural about his hair or appearance (and, in fact, people in the narratives have difficulty distinguishing the Buddha from the other monks surrounding him, because they all wore the same uniform, and had the same "hairstyle", which is to say, none at all).  The article in question is here, followed by a long list of disparaging comments from people who would prefer if I had never written it:
• 2010, "The Buddha was Bald, but is Everywhere Depicted with a Full Head of Hair." New Mandala.
http://asiapacific.anu.edu.au/newmandala/2010/12/30/the-buddha-was-bald/

There is a third very interesting image that I don't have a photograph of: the massive bronze doors to Tzu Chi's great hall (in Hualien) depict the founder of the organization having a vision of the Buddha (in bas relief).  In that (very formal) depiction of the event (that I assume was at least vetted by the master herself, and likely made by the artist following her direct instructions) the vision of the Buddha has a naturalistic, bald-shaven head.  I assume that this event (the founder's vision) has also been depicted in printed illustrated books from Tzu Chi over the years; it would be interesting to know if the Buddha image therein has been consistently depicted one way or another, or if the (naturalistic) bad head is only shown after a certain year.

Given that the background of Cheng Yen [證嚴法師] was almost entirely in the (Mahayana) Lotus Sutra [法華經] tradition, it is remarkable that she would either see the Buddha as bald in such a vision, or that she would choose to depict the Buddha this way in retrospect (or both).  I have no reason to think that Cheng Yen (or anyone surrounding her in Taiwan) is aware of the canonical facts set out in my article, cited above; quite the contrary, my impression is that the Taiwan's Human Realm Buddhism [人間佛教] is leery of Theravāda influence, if not openly hostile toward it (I've never met anyone in Taiwan who has comfortable with openly discussing the blatant contrasts between the ancient Indian texts, more recent Chinese texts, and contemporary practices --or, at least, I haven't met anyone yet).

How and why did Tzu Chi end up challenging Mahayana assumptions in this way?  I'm asking this quite openly, as someone may write in with the answer (or to tell me about some research into the question).

Although the naturalistic bald-shaven head shown in the new image promoted by Tzu Chi (i.e., 宇宙大覺著) is in some ways more challenging to Mahayana traditions than the mosaic, in other ways it is less so.  Unlike the mosaic, the image of the bald Buddha looming over the world has East Asian facial features (further, I cannot say if it is intentionally androgynous, but it is, at any rate, of nearly indeterminable gender).  When it is shown in color (as in the reproduction of paintings, etc., rather than the monochrome statues) the skin is pale, and neither the robes nor the overall appearance suggest any connection to ancient India.  Of course, the globe of the world as depicted is incompatible with ancient India's cosmology, and also with medieval China's cosmology; it reflects a modern, western scientific notion of what the world is, under the fingertips of the Buddha.

If someone would send me an e-mail with the date of the hospital mosaic's completion, I'd like to know; I'd also be interested in the date when Tzu Chi formally unveiled the 宇宙大覺著 image (as of 2012, this is now the "standard" image, seen in the halls and offices of their organizations all around the world, but this hasn't always been the case).
Posted by Eisel Mazard at 15:06