The statistics on religion in Taiwan are extremely interesting, but my initial warning (and final conclusion) here would be the standard refrain that "more research is needed".

The statistics that we have (on religion in Taiwan) are not provided by the census: the numbers are put together by a separate department of statistics inside the Ministry of the Interior (M.O.I.).  They rely on a number of other agencies, that evidently report on different religions in different ways.

Is that a problem?  Well, it means that each statistic can only be compared to itself over time, and that you can't really compare the numbers of one religion to another.  The measures used to define and document "membership" in different religions is not uniform, so you get a number that may be quite abstract that tracks the change within each religion, but that can't be compared to the others.

The threshold to be counted as a follower of Buddhism (n = 167,088) is completely different from the threshold to be counted as a Protestant (n = 401,023) and the two religions are administered by starkly different agencies.  Buddhism in Taiwan is governed by the B.A.R.O.C., a unique government agency, with unique restrictions that do not apply to any other religion on the island (cf. any of the work on this subject by André Laliberté).

If someone were looking uncritically at the bar charts of the raw numbers from the M.O.I., they would have the (incorrect) impression that Christians vastly out-number Buddhists on the island; meanwhile, the estimate offered by the C.I.A. would seem to devolve from a completely different universe.  It's the same universe, just two very differently calibrated statistics. 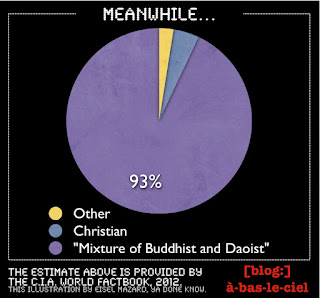 Although the C.I.A. is not my preferred source of information, their estimate that 93% of the population is either Buddhist, Daoist, or some combination thereof, would lead us to expect to find more than 21½ million people in this category in Taiwan (the island's population, in 2011, exceeded 23 million).  How many Buddhists and/or Daoists are recorded by the M.O.I.'s methodology?  Merely one million (n = 1,005,451) in their combined category of all "temple" (寺廟) religions (inclusive of Buddhism, Daoism, and a number of other East-Asian religions, the most numerically significant being Yi Guan Dao [一貫道]).

What none of these statistics indicate is how many people have no religion at all (be they atheist, agnostic, or otherwise).

The C.I.A. estimate does not leave any category at all for people who might be "none of the above".  In this cultural context, it seems that people who might otherwise be listed as having "no religion" are instead presumed to be "misc. Buddho-Daoist"; that's very misleading, and raises a set of issues that deserve some research unto themselves.  As with many post-colonial societies around the world, the contest between missionary Christianity and "Local Religions" has created a cultural assumption that anyone who has not consciously converted to a foreign religion will (by default) implicitly accept the local religion.  This is utterly untrue, and sets up a strange asymmetry of the religions: one category of religions is consciously chosen (and converted to), whereas the other is presumed to include everyone who does not reject them (by dint of their ethnicity).

The statistics we've got from the M.O.I. remain useful: they simply cannot be compared across categories and they have no relationship whatsoever to each religion's proportion of the total population.  Those are two considerable caveats, but I'll work with the numbers I've got.

Whatever paperwork is required for a person to be written down as a follower of a particular Buddhist organization in Taiwan (under B.A.R.O.C.) is evidently not the same as the procedure used for the other religions (not governed by B.A.R.O.C., nor any comparable institution).  Some of the smaller religions are reporting vague estimates to the government (e.g., it is not credible that Taiwanese Scientology [山達基教會] had exactly 1000 members every year since 2009, whereas they had only 100 members in 2008, etc.); others give very precise numbers, with annual fluctuation (there were exactly 902 Confucians [儒教] in 2011, whereas there were 909 in 2010 --or, at least, these were the numbers documented as formal members of one of the 15 confucian temples generating the paperwork).  I can also imagine, at least hypothetically, that some religions would be more motivated than others to provide documentary evidence of their following to the government, especially inasmuch as such paperwork may be linked to the regulation (if not subsidy) of social services provided by the religion.

Although Catholicism [天主教] is a minority religion in Taiwan, it is massively institutionalized: in 2011, Taiwan was home to 9 Catholic Hospitals, 7 Catholic Clinics, 16 Catholic Middle Schools, and 142 Catholic Kindergardens and Nursery Schools (exceeding the number of Buddhist institutions in every category mentioned; see the charts for some other examples).  This type of institutional depth probably produces paperwork documenting the membership of a larger proportion of their followers.  Religions, also, will vary as to their requirements for people to "enroll" to receive various rites of passage (and, again, the litigious nature of baptism, marriage, etc., in the Catholic tradition is a point of contrast). 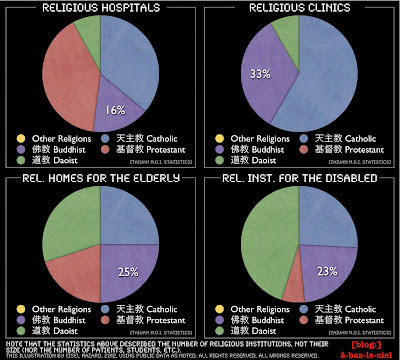 The raw data for the number of religious institutions (shown here as eight pie-charts) can be misleading in many ways: there is no correlation between the number of institutions and their number of beneficiaries.  10 small schools may have fewer students than 1 large one, and so on for the number of patients in hospitals, or the number of homeless people assisted by a shelter.  There are nevertheless a few interesting facts that seem to leap off of the page here.  The focus of Catholicism on early childhood education is an interesting contrast to the emphasis that Taiwanese Daoism (apparently) places on retirement homes for the elderly, and "welfare foundations" (presumably for the poor?).  The underwhelming performance of Buddhism in all categories is self-evident. 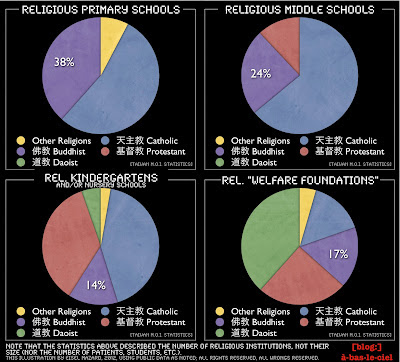 At any rate, you've got the incongruous situation that the Christian minority (estimated at 4½% of the population by the C.I.A.) dominates the institutional landscape, and has greater numbers of formally documented followers than Buddhism --with the significant caveat that the nature of the documentation applied to the two is not comparable, and has no correlation to real numbers of devotees.  Confused yet?

However surreal the statistics may be, they're still indicative of changes over time: from 2001 to 2011, the number of (documented) Buddhists actually declined.  This is both true in real numbers and when we render the number as a percentage of the (growing) population.

In the first chart, the orange line shows you that the decline took place between 2002–2004, and that the numbers have recovered some of their losses since then, from 2004–2011.  This orange line is showing the total for all of the "temple" (寺廟) religions measured as a percentage of the population (year-by-year), to compensate for the growth in the latter.  In raw numbers (with no such compensation) there were 1,053,165 "temple" followers in 2001, and this declined to a low of 946,469 in 2004; the number increased again to 1,005,451 in 2011 --but because of the growth of the total population, this is a more significant decline than the number itself would suggest.  As a proportion of the population, "temple" religions declined.  As already explained above "temple" (寺廟) is a category that includes Buddhism, Daoism, and a few other East-Asian religions (all 902 Confucians [儒教] aforementioned); the category excludes all forms of Christianity, Islam, and so on.

During this period, both Buddhism and Daoism declined.  In raw numbers, the documented followers of Buddhism declined from 212,671 to only 167,088 in 2011.  Although this is an abstract figure (with all of the caveats stated above) and does not indicate the proportion of the population that is Buddhist, when we compensate for population growth, we're looking at a decline from 0.95 to 0.71 (a number that is abstract, but still indicative of change).  The corresponding decline in Daoism can be seen on the charts.

What does that mean?  Is there a real and ongoing decline in Taiwanese Buddhism, or have there been institutional changes (in B.A.R.O.C.) during this period that would have distorted the figures?

One of my reasons for writing an article of this kind is to invite responses on that point from my colleagues (some of whom know much better than I) --but there does seem to be "cause for pause" in these numbers, and many questions that deserve some further study.
Posted by Eisel Mazard at 14:04

Email ThisBlogThis!Share to TwitterShare to FacebookShare to Pinterest
Labels: The politics of religion, The Politics of Social Statistics, The religion of Politics, 台灣
Newer Post Older Post Home