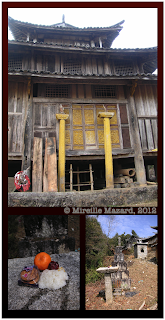 I provided an interview to the Hong Kong publication of the Tung Lin Kok Yuen foundation (東蓮覺苑).

The questions (and the illustrations) largely concern the situation of Theravāda Buddhism within Yunnan (云南) but the answers cover a great deal of ground, both about my own research into Pali, about the historical and current situation of the religion in Southeast Asia, and so on.  Politics are not omitted from the discussion.


It is credit to the editor that this was published (in a conservative, Buddhist newsletter) without censorship.  This is another interesting example of an openly-religious publication being more willing to print both criticism and controversy than "secular Buddhist" publications are, in my experience.
Posted by Eisel Mazard at 08:55

Pause to consider just how much is wrong with this picture. 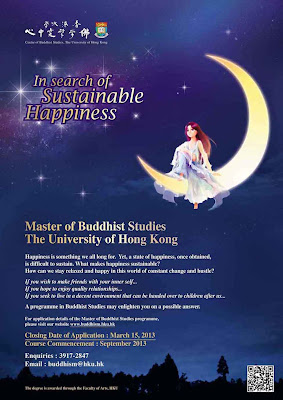 This isn't a poster that was created to promote a temple, nor yoga classes, nor a video-game… it is a poster created to promote graduate-level research in Buddhism.  Where?  At the "Centre of Buddhist Studies", 佛學研究中心, at Hong Kong University, 香港大學.

What does it try to sell you?  Philology?  Language-classes?  Mastery of ancient texts?  No, it tries to sell you happiness (here symbolized with a cartoon of a child sitting on a crescent moon… which is not a Buddhist symbol).

Frankly, no M.A. program in the world should try to sell you happiness: they should try to convince students of the value of their academic program… of what they can learn or, at least, what skills/qualifications students will gain.  Both the image and the promise of "happiness" here make me suspect that the M.A. program is lacking in some of those other things.

It gets worse: why does the poster promise friendship with "your inner self"?  The most fundamental premise of Buddhism is that you don't have an inner self!  This is discussed in English as "no self", and "no soul", but there are also numerous suttas that state (reciprocally) that what's inside you is nothing but "blood and guts" (more poetically, "a synergy of sinews").  The attack on the idealization of "the inner self" (demystifying the body and the self, qua no-self) is one of the distinctive aspects of Buddhist philosophy and religion.

Yet here is an M.A. program in Buddhist studies that is supposedly going to promise you the same thing as every new-age cult: a deeper connection with your so-called "inner self"!  This is especially unseemly for the academic study of Buddhism, but it is also a promise that (probably) no university can deliver on.

Let's be honest: they're asking you to pay thousands of dollars to read some books, write a bunch of exams, and then receive a diploma that will never help you to get a job.  That's what an M.A. in Buddhist studies really is.

They cannot possibly offer you "quality relationships" nor even "a decent environment" in downtown Hong Kong.

As terrible as this poster is, I can say that it is more ethical than McGill University (Canada) that simply publishes a pamphlet with a direct lie, claiming that they offer Pali as a language of instruction when they don't have a single employee who knows anything about Pali, nor Theravāda Buddhism.  That is false advertising on another level entirely.
Posted by Eisel Mazard at 07:53

Email ThisBlogThis!Share to TwitterShare to FacebookShare to Pinterest
Labels: Buddhism, Hong Kong, The politics of religion


In an apparent riposte to my earlier article on my efforts to learn Cree, and mentioning my more recent lament that I'll have to throw my Cree books in the garbage, Lorna Williams wrote in to inform me that you can't learn a language in a classroom anyway.  Well, that certainly is a convenient justification to simply "give up" on a system of classroom education that is failing, while other languages are being successfully taught right down the hall (in the same universities, etc.).  Lorna Williams is not merely a professor, but also a "Canada Research Chair" (which means that she makes big decisions about how big sums of money get spent).  My reply follows her message, below.

Eisel, I find your email distressing in that you make sweeping claims that
no one cares about or wants to learn Cree. It is true that one cannot
learn a language by taking a course, you need to be immersed in the
language for a period of time. I also cannot believe that there is no one
to give the books to, I know if you brought them to Dr. Jan van Eijk he
would be happy to redistribute them to other students who would benefit
from them. I hope you will find what you are looking for as you continue
on your travels. Lorna

> Eisel, I find your email distressing…

It is distressing.  The situation at F.N.U. is distressing.  I'm
distressed.  If you've read my article about my experience at F.N.U.,
and you find it distressing, that's good: the article is intended to
raise difficult questions, that nobody inside the institution wants to
ask.  The president of the university, etc., have all seen the article
already.


> It is true that one cannot

> learn a language by taking a course…

> …you need to be immersed in the language for a period of time.

Well, there are language departments teaching Japanese that make
arrangements for their students to have some immersion in the
language: but nothing like that is possible for First Nations
languages here (despite the fact that it is much cheaper to take a bus
to Prince Albert than it is to take an airplane to Japan!).  I am well
aware of the benefits of language-immersion, and I discuss them in the
same article about learning Cree (I don't know if you read it in full
before replying) where I complain that institutions need to take a
more active role (even if it is just in organizing bus-trips!) so that
students will have more direct language exposure --because it is much
easier to meet people who speak Chinese than it is to meet people who
speak Cree in downtown Regina.

> …I know if you brought them to Dr. Jan van Eijk


I have met and spoken to Prof. Jan van Eijk many times, and he knows about every stage of my personal tragedy (in trying to learn Cree, etc.).  If you think he cares in the slightest, think again.  I begged for his help many times.  The only help that I received was one short e-mail, suggesting that I write to a certain professor at U.B.C., to ask if there was any hope there; I did receive a very useful reply from U.B.C., saying that their situation was even more hopeless (for language instruction) than F.N.U.


> I hope you will find what you are looking for as you continue
> on your travels.

I won't: my life and all my aspirations have been destroyed.  If I
can't learn Cree within Canada, I can't learn it anywhere.  I searched
this entire country for any possibility of learning Cree or Ojibwe
(from U.B.C. to Montreal) and I didn't find any viable option (on the
contrary, many of the replies I received were just as bleak as the one
I've mentioned from U.B.C.).

First Nations language education is in a situation worse than a
crisis.  Don't make excuses that nobody in their right mind would
offer for any other language: if it was impossible to teach a language
in a classroom, why is the classroom of such vital importance for
every other language on earth?  Why was classroom teaching of such
enormous importance to the revival of other endangered languages?

Yes, people do need classroom instruction in Cree: I'm one of them.  I
couldn't get it.  I'll never have the opportunity to study the
language again.  This is a personal tragedy for me --and it wasted two
years of my life.  That's how the story ends for me --[and] 99.9% of people
who have a similar disappointment will not be able to publish an
article about it (and won't have the nerve to complain directly to
people like Prof. Jan Van Eijk).

For the sake of contrast (and because this was mentioned, in passing, in the message above), here is the exceedingly polite response to the same article that I received from Vianne Timmons, President of the University of Regina.

Eisel,
Thank you for your email.  I read you Blog with interest.  I will share your concerns with the President of First Nations University.  You raise so may issues that are important. Preserving the Cree language is important and I know that your insights will help in improving language instruction.
Thank you again for taking the time to write.
Dr. Timmons

The photograph of President Timmons, above, was pulled from a C.B.C. article on the long-term scandal of how high the salaries are for university administrators.  I appreciate that she took the time to read my work and reply; however, I neither expect that she nor anyone else in power (and earning above $350,000 per year) is going to take on the challenge of fundamentally improving the situation for the study and preservation of Canada's indigenous and endangered languages.  Both the opportunity and the obligation to make a positive difference are unique to Canada: we can't expect London, Paris or Berlin to excel in the study of these languages.  Sadly, the leaders in the field will either be educated here, or else nowhere at all.

Email ThisBlogThis!Share to TwitterShare to FacebookShare to Pinterest
Labels: British Empire Genocide, Cree, First Nations, The language of politics, the politics of language

Giving Away my Copy of the Pali Canon

I struggled for many years without owning my own copy of the Pali Canon, and I'm now giving away the only copy I ever owned (after a very short time with it).  Although published in Sri Lanka, this edition spent more time in a warehouse in Thailand than it spent on my desk.  I am now giving it away to another student, who will be able to work with it (while I won't).

That is, of course, heartbreaking.

On a much smaller scale, it is also heartbreaking to be throwing my box of books on Cree into the garbage --because I still do not know a single student of the language whom I could give them to.

I have another small collection of books on Hokkien (閩南語) that, similarly, has no possible recipient, and so will end up in the garbage.
Posted by Eisel Mazard at 15:17