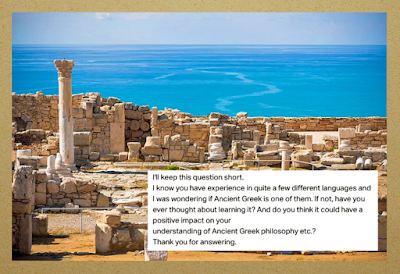 [My reply to the question from a viewer, shown in the image above.]  I started learning Greek during a very sad, very memorable time in my life: while my marriage with my ex-wife was in-the-process of breaking up, and while I was taking care of my infant daughter 24 hours per day.  However, infants do sleep for many hours of the day (even if unpredictably) and so I would put my daughter down in the crib, and study Greek at a table in the same room with her, where she was napping/sleeping.  As "everyone" will tell you: Greek (ancient and modern) is fundamentally similar to Pali (and Sanskrit).

Yes, the "everyone" being alluded to is a pretty erudite circle, but hey, you know you're talking to a snob.  ;-)

There is indeed a "What if?" question, for "What if I had continued to study Greek?"   Instead, as you know, I've been through tremendous misery with Chinese and Japanese since then.  However, I have zero faith in Greek culture: I honestly do not think I could ever have a job in Greece, and I do not think I'd have friends in Greece —I have one Greek friend now (internet-only, we've never met) who very much rejects my understanding of the modern culture, and who insists I'd do very well in modern Greek culture, and with the modern Greek language.  If my daughter does actually move to Bulgaria, I would indeed consider moving to Greece, and learning Greek (again).  And yes, the years I spent studying Pali actually do make it easier to learn Greek (ancient or modern: they are really, IMO, the same language to a greater extent than the British ever want to admit, i.e., because the British insist on pronouncing Greek words with a British accent that they pretend is "authentic" ancient Greek).
Posted by Eisel Mazard at 20:21

Or, "How I met your mother": the true story of a peculiar journey from Laos to Yunnan. 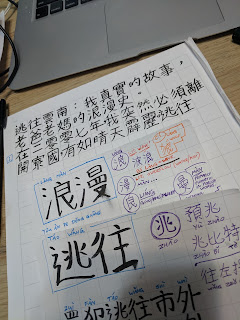 May, 2019, Financial Report: How Much Do I Earn From Youtube? 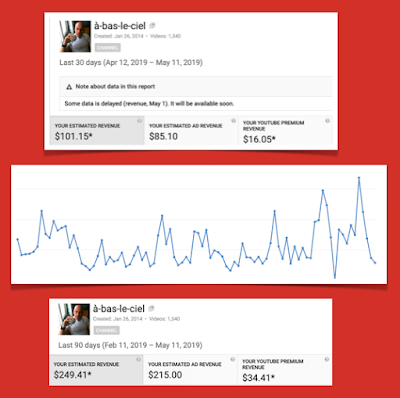