My Chinese handwriting (on the meaning of "pirate") 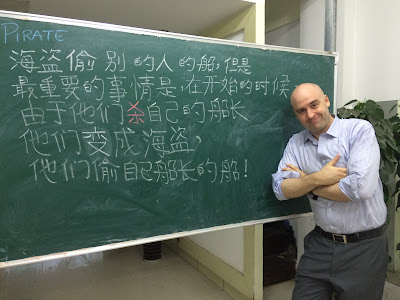 Obviously, very rapid, very sloppy writing (on a chalkboard) —and yet legible enough for the students.  This was in 德宏, of course.
Posted by Eisel Mazard at 13:39 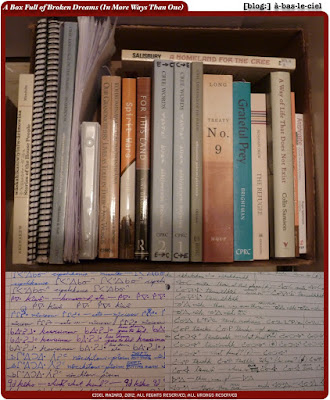 Many years ago I decided to devote the rest of my life to First Nations languages: specifically, I wanted to work in indigenous education (and in the political processes related to avoiding the extinction of indigenous languages in Canada).

I went to First Nations University of Canada and I enrolled in Algonquian languages (studying Cree and Ojibwe and taking related courses). I do, indeed, have the transcript to prove this.

Years later, I tried to study west-coast languages at the University of Victoria, also: despite the vague statements about the university being committed to preserving indigenous languages, I found that it was impossible (genuinely impossible) to study any indigenous language at UVic at all (and yes, I spoke with professors, face-to-face).

So, at this time, most of my accomplishments (listed in my C.V.) are related to Asian languages (Chinese, Japanese, Cambodian, Laotian, Pali, etc.) —and, within the education sector, I've had work experience teaching English (E.S.L.) in Asia. However, the truth is that all of these things have been a result of the impossibility of continuing to work on First Nations Languages (and First Nations Language education) in Canadian universities.

I did, also, achieve some level of expertise in Asian languages: I delivered a lecture at Oxford University, England, at the invitation of senior professors, and the audience was almost entirely comprised of senior professors. Although the topic of the lecture was Asian, I can genuinely say that the audience was shocked when I presented them with a "parallelism" from the history of the British Empire in Canada (i.e., the genocide of the indigenous peoples). The lecture is listed in my C.V., and the transcript of that lecture is still available on an Oxford University website (to prove the truth of the anecdote, and show exactly what I said about First Nations languages, at that time, in that forum).

This is all I can say for myself in terms of my "qualifications and experience" in relation to First Nations and indigenous language education: I can prove that this is a topic that I have been passionate about (and that I tried to pursue, as my career, via First Nations University) but it has been impossible for me (thus far) to make further progress in the field, because of the extremely poor situation within Canadian Universities for my generation.

As for the job's other qualifications: yes, I have experience teaching English as a Second Language in Asia. I have just completed a full year of teaching university-age students with all of the responsibilities of a university professor (from writing lectures and grading exams to one-on-one work: memorably, I had separate meetings with one girl who had a severe hearing-disability (she was deaf in childhood, apparently), to help her with her elocution). Yes, I am "sensitive" to the issues that separate E.S.D. from E.S.L. in the Canadian political context: in many ways, my dream was to work on Canadian Aboriginal Languages, and a job of this kind would let me recapture some small part of that dream.