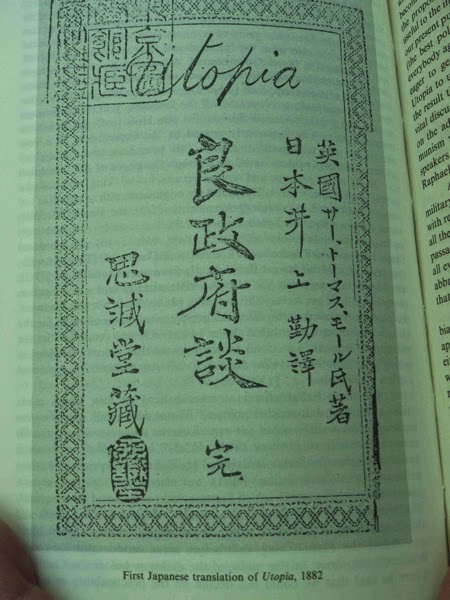 There are many strange discontinuities and asymmetries in the "East meets West" equation, and these become even stranger when you need to work through English-language documentation.

I have thought for some time that particular aspects of Mao Zedong thought derived from Thomas More's Utopia --possibly via Japanese theoreticians who were (uncontroversially) influenced by More, and possibly via the Chinese translation of Utopia itself.

I was able to track down the (known) Chinese translations simply through library catalogs, but the only secondary sources (in English) are in the somewhat obscure journal Moreana.  This is a journal that has not (yet) been digitally archived, nor indexed in a way that can be found through library-record searches.  I found these articles in the "old fashioned" way of the 1990s: by sending an e-mail to the editor of the journal, asking for advice.


The journal has two articles of about one page each dealing with the Chinese versions, and then a single (much longer) article discussing the Japanese version.

The first Chinese translation appears in 1935, although it is possible that informal adaptations from the Japanese circulated prior to this date.  In general, much of the impetus of the May 4th era [五四運動] relied on Chinese intellectuals making use of Japanese sources to access Western ideas.  As I've written about before, Mao Zedong was influenced by some very un-Marxist sources, including Japanese anarchists. (Link)

Two of my initial suspicions are apparently correct.

(2) The sense of irony and humor disappeared entirely in the Chinese translations.  The text was effectively "adapted" to be a humorless diatribe in favor of Utopia --rather than a sardonic set of reflections on the failings of both actual and imaginary societies.  This adaptation had already taken place in the first Japanese edition of 1882, but the translators working from the Japanese would not even be aware that there was an element of humor that they were downplaying: ambiguity, equivocation and intentional use of paradox, disappeared.

I think you can draw a fairly direct line from Thomas More's invectives against money and Japanese works like Shūsui Kōtoku's (幸徳 秋水) "Abolish Money!" (link).  More's original text is not, in fact, a humorless condemnation of currency as the root of all evil; More was being droll (in a manner that is, to all reports, difficult to translate even from Latin into English) in showing some of the absurdities that follow from the principles that his (fictional) characters debate.  Although written in Latin (and 499 years ago), his sense of humor remains "very British".

In the early 20th century, Thomas More was certainly an "old" source in Western eyes, and perhaps seemed less radical (or less subversive) than he really was.  His association with Catholic Sainthood and his inclusion (as "a classic") on required-reading lists certainly made him seem like a pro-establishment figure, in the Western milieu.  However, in East Asia, Utopia was then circulating in exciting, new translations, with exciting (genuinely radical) new ideas.  It was in More that both Japanese and Chinese radicals saw the (simplistic) idea of accomplishing utopia by abolishing money itself --an idea that shows up in Maoism, although it is (technically) un-Marxist.  Marxists don't blame the unit of currency itself as the cause of poverty; if interpreted in a totally humorless manner, Thomas More's Utopia does exactly that.

Meanwhile, of course, interpreting the text in a humorless manner is a misinterpretation.  More's style relies on paradox in the old-fashioned sense of the term: if you ignore it, you would have to believe that the author seriously proposes that toilets (technically, chamber-pots) should be made out of solid gold, and that he is unaware of any absurdity in presenting this image to the reader.

"…so easy a thing would it be to supply all the necessities of life, if that blessed thing called money, which is pretended to be invented for procuring them was not really the only thing that obstructed their being procured!" (Gilbert Burnet's translation)


It is very unlikely that Thomas More sincerely wanted to abolish money.  However, it is absolutely certain that the abolition of money was a major concern for Japanese Socialists, Anarchists and radicals of various kinds, and that this idea became a distinctive aspect of Maoism (i.e., differentiating Maoism from Soviet Communism, etc.), explicitly articulated as such in various periods, but especially in the Cultural Revolution and latter-day Gang-of-Four publications.

My suggestion here is that we see a sort of brutalized recapitulation of some of Thomas More's major themes throughout East Asian radicalism (from 1882–1982, roughly), and not only in reference to the evils of money, but also (e.g.) in the idea of "the conspiracy of the rich" controlling social welfare programs, the assumptions about absolute social equality (e.g., the assumption that it can be attained through destructive means, as if could result as a natural side-effect of an attack on private property, etc.), and so on.