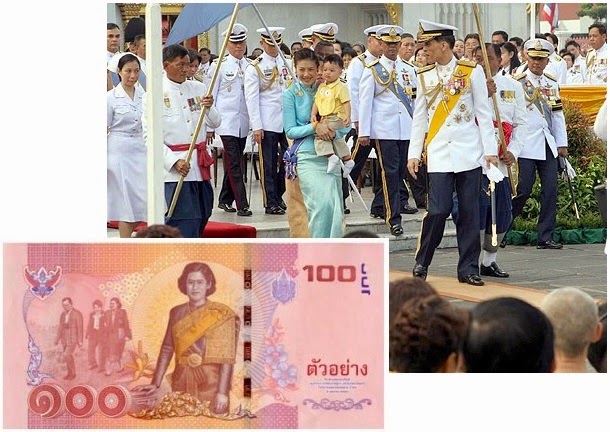 Princess Sirindorn appears on the (ubiquitous) 100-Baht bill in 2015.  Although this isn't her first appearance in Thai numismatics, I think it is fair to say that it is unusually prominent.  The officially-stated reason for this is, of course, to celebrate her 60th birthday.  It could be interpreted by some as an indication that we may see more of her image on bills and coins in the future; it could be seen as a signal that she might be expected to inherit the throne in future.


Meanwhile, Prince Vajiralongkorn's divorce was announced to the public in December of 2014, with accusations of corruption against some of his ex-wife's relatives reported in the press (i.e., accusations that may or may not have any connection to the divorce).  This is not the prince's first divorce.

In 2014, journalist Shawn Crispin addressed a C.S.I.S. lecture-hall on Thai succession politics, opening with a joke that he had to make his statements carefully, so that he would be able to (legally) return to Thailand after the lecture finished.  A few minutes later, he joked that the room had become remarkably quiet.  The issues he discussed are outside of the remit of permitted discourse in Thailand, but they are, nevertheless, overly familiar to anyone interested in Thai politics.  Click here to see the video (on Youtube).  Would his presentation have been more or less tense after the announcement of the divorce, and related rumors and scandals?  Is the printing of the new bill just a coincidence, or a significant signal?

The country has been teetering on this brink for a long time.  A sense of dread can't really be sustained for so many years.

Shawn Crispin himself represents a rare species: he was one of the last employees of F.E.E.R. (that shut down in 2004), and F.E.E.R. was itself one of the last publications of its kind.  In 2015, investigative journalism is scarce, even within the western world.  Bureau-based international journalism is scandalously scarce, even in major capitals with ongoing conflicts, such as Baghdad or Washington. (Source 1, Source 2, Source 3)  We're left to hope that Crispin is getting a paycheck from the C.I.A., or, perhaps, some think-tank connected to C.S.I.S. in Washington; it seems unlikely that he could earn a living writing articles for the online-only Asia Times (dot com).

To provide further grounds for rumor and speculation, it seems that Thaksin Shinawatra met with Prince Vajiralongkorn (face-to-face) in Germany in 2011. (Source: The Economist)  There is no possibility that Thaksin's portrait will be appearing on any bank-notes in the near future.
Posted by Eisel Mazard at 10:00