The first steps toward native language curricula (finally, in 2015) 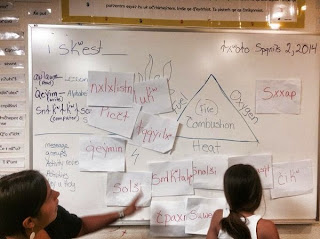 This is news in 2015: Montana is providing support for indigenous language education, for the first time.  It's a change that comes very late, and the only question is of whether or not it will be too little, too late.


"The only other state that provides funding for native language immersion in public schools is Hawaii, which has one native language. In Montana, there are nine." (Source)

The turning point in American policy on these issues was, incongruously, Richard Nixon, who is rarely praised or remembered for it (except at his own memorial foundation); however, one might surmise that it wasn't a coincidence that Nixon had witnessed the nadir of "terminationism" as vice-president to Eisenhower (HCR-108 was passed in Eisenhower's first year in office).
Posted by Eisel Mazard at 09:28