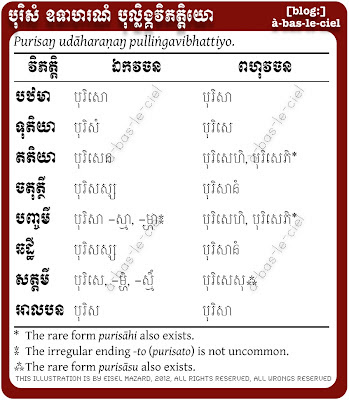 I am here providing a set of ten of illustrations that I could simply say are self-explanatory, but their significance would be evident to an absurdly small number of people.

How many people today really have reading comprehension of Pali?  How many people who could read Pali actually spend their time and effort doing so?  How many people even aspire to take on the years of hard work that the acquisition of reading ability (in a dead language) requires?

The answer is, very few: too few.

When I prepared these tables of Pali declensions (to be uploaded to this blog) I thought that I would accompany the illustrations with an article that summarized the advice I've given (in e-mail) to other aspiring Pali scholars (in recent years).  Once in a long while someone writes to me asking for advice, and I had thought that I would re-read those messages that I'd sent earlier, and put together an article for a broader audience on that basis.

In looking over that advice I'd given, I soon discarded that plan.  Of the few people who had asked me for such advice over the years, how many aspired to learn Pali?  How many of them actually did so?

The answer is, too few: perhaps none at all.

People do ask me for advice, but they normally don't want the advice that they receive.  People ask me for advice on how to do the hard work of learning Pali, but what they expect to hear in reply is the (false) reassurance that this is not hard work at all, but merely some sort of vacation.

There are many people who will sell you the dream of passive progress, but I'm not one of them: education is neither passive for the student nor the teacher, and when you're put into the role of both student and teacher, it's absolutely exhausting.  When I lived in Asia, I wasn't on vacation; often enough, I had to say exactly that to other foreigners who met me in places like Laos, Cambodia and Yunnan ("I'm not on vacation", "I'm not retired") and whether you had met me at a monastery or at an archive, I was not there to relax, nor to have a good time.  Progress in language-comprehension isn't passive, it's active: it's hard work.

Even a small child learning a language from his or her parents finds language acquisition to be a daily struggle: in a dead language, there is nobody who can teach you comprehension in that sense.  At most there is someone to administer a test (after the fact) to verify what progress you've made independently (sitting alone with the books).  There is no PhD program anywhere in the world where you'll have someone spending time speaking to you, listening to you, and caring about whether or not you've said (or understood) something correctly, the way that a parent would (or should) correct a lisping child, struggling with words he or she half-understands.

A dead language is a language that man and wife no longer use to settle their arguments; a dead language is one that parents no longer use to converse with their children.  Pali is entirely dead, and anyone who promises you a scholar's paradise at the other end of an airplane ticket is selling you an empty dream (in this respect, it doesn't matter if the flight is going to Thailand, Sri Lanka, Burma or otherwise).  An airplane ticket will not take you back in time; the very few people who study Pali in Southeast Asia learned the language the same way I did, (sometimes even using the same textbooks that I did, e.g. ☛1, ☛2, ☛3), simply through hard work, and, most often, despite the institutions around them (not because of them).

This is one of the reasons why I started researching the (moderately ancient) grammar of Pali (the Kaccāyana-Vyākaraṇa and related texts): I was interested in the difference between the traditional (pre-modern) methods of teaching Pali (and studying Pali) and the (modern) European-produced methods that have rapidly replaced them all over the world (yes, even in Sri Lanka).  The range of facts that I turned up in that research is very interesting to myself (and perhaps five other people?) but, for the purposes of this small article, only one minor point is salient: modern Europeans need to remember that when they travel to Asia, they meet and speak to modern Asians (not fragments of an ancient civilization, and not fluent speakers of an ancient, dead language).  If you visit the parthenon you won't meet the people who built the parthenon; you'll meet modern Greeks, working as tour-guides at the parthenon; it doesn't matter if they dress up in robes, or act out a script in an ancient language.  The same applies to the ruins, the robes, and the ancient philosophies of India and Southeast Asia.

Even if you speak to a very elderly monk, you're quite possibly speaking to a veteran of World War Two, and a man who is a product of modern educational methods, and whose world-view has been shaped by the dramatic political events of the 20th century (more likely, you'll meet a veteran of the Vietnam War, and someone who has never had hands-on experience with palm-leaf manuscripts).  In the year 2012, even the most elderly monks have learned what they know through modern means (and much of what anthropologists jejunely report as ancient wisdom has modern origins, and is rolled up with modern misconceptions, some attributable to unique European authorship, etc.).  I do think that some of this mutual-misperception is a result of the limited language ability (and, for more on this, including the peculiar conflict between anthropology and philology, see my article "Canon and Reason", listed here).

The language is hard work.  However, it isn't just the language that's hard.

Learning the history, philosophy and literature of Buddhism is also very hard work; and the truth is that I've almost never met anyone in my life who was sincerely interested in taking up that work.  I meet a lot of people who want some kind of pretext to go on vacation.

So, instead of re-stating the advice that I've given (privately) to others in the past, I would simply say this: take a look at these tables (all ten of them) and try to imagine just how much hard work it would be for you (or for anyone) to gain reading comprehension of Pali.  It might be harder than any work that you've ever done before; it might be hard work that would never be rewarded (or that would only be rewarded with derision).

All of these excuses are worthless: they result in people (who are self-proclaimed "teachers" and "masters") describing themselves as having 30 years of experience ("teaching" or "practicing") who are, in fact, neither more nor less ignorant today than they were on the first day that they began.  They can read generalizations about Buddhism in English; they can produce new generalizations based on the old generalizations, but it is a process of the blind leading the blind.  The Buddha didn't speak English, and he didn't speak Chinese, either; you're never going to progress beyond those vague generalizations without reading the primary sources.  You're never going to be able to discern the difference between truth and fiction (amongst secondary sources, and amongst the words of self-proclaimed gurus) without reading the original source for yourself.  That's the advice that nobody wants to hear.
I recall a very simple remark made by Prof. Neil McMullin in reference to the Theravāda monks who were then pursuing various graduate degrees at the University of Toronto.  He said of them simply, "…but if they were actually reading the original text for themselves, they would find problems with it".  Indeed, they would come up with original questions that they were uncertain as to how to answer themselves, they would confront unfamiliar facts that challenged their preconceptions, and would not repeat the same old generalizations in English.

That simple remark stayed with me while I was in Asia, and McMullin was right: people who read the texts for themselves know about problems, whereas those who do not read for themselves merely know about vague ideals and generalizations.

The example of the 12 links (that I've already discussed in detail) is a good one: the vast majority of sources on this subject in English simply reproduce generalizations, or produce new generalizations from ever-more-vague readings of the old ones.  Even less popular are the doubts I've been known to raise about English translations of meditation texts: in a language that nobody else knows, and in a philosophy that many worship but few read, to have such doubts is a privilege.

I was present in Thailand when several Buddhist monks offered Prof. Gombrich their own lame excuses for not learning Pali, after the good professor had offered a rousing lecture with the straightforward conclusion that reading comprehension of the language really is pre-requisite.  As a rebuttal, one of the monks suggested that it was not necessary for a Buddhist to understand the words of the Buddha for the same reason that a patient did not need to understand medical science in receiving a cure from a doctor.  Gombrich had the patience to reply at some length, but, toward the end of this dialogue, he did say with some exasperation that it really seems absurd that the point would even be argued: he asked the monk to compare his own situation to the minimum expectations of Jewish scholars (in relation to Hebrew) or Islamic scholars (in relation to classical Arabic).

Given that both sides of this (very unequal) debate accept that the Buddha's teaching involved the memorization and recitation of the words of the Buddha (syllable-by-syllable, as recorded in the canon, and as they're imagined to have been spoken, mythically or not, by the Buddha and his contemporaries) why is it that the great majority believe that those words should be recited by men who have no comprehension of their meaning?  Why is it that there is such a strong lobby in favor of Pali illiteracy amongst the very people who have supposedly devoted decades of their lives to this religion?

The answer, I'm sorry to say, is uniform with the simple thesis of this short essay: people may say that they want to learn Pali, or that they want to study philosophy, or even that they want to practice the Buddha's ancient discipline, but, for the most part, what they are really looking for (or are really expecting to find) is merely a sort of vacation.  Their assumptions about what exists at the other end of the airplane ticket (or the bus trip to the "retreat", etc.) is one of passive progress.  It doesn't matter if you say that you've been practicing for 30 years: either you know the Buddha's philosophy or you don't, and if you read only English, you never will. 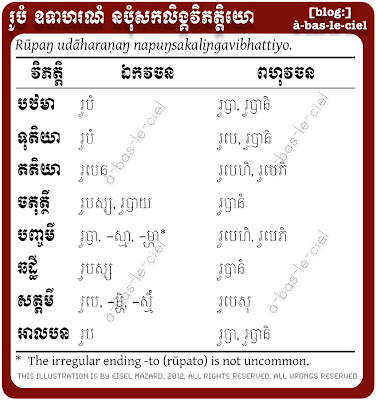 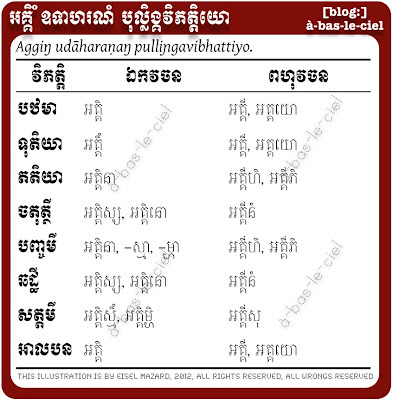 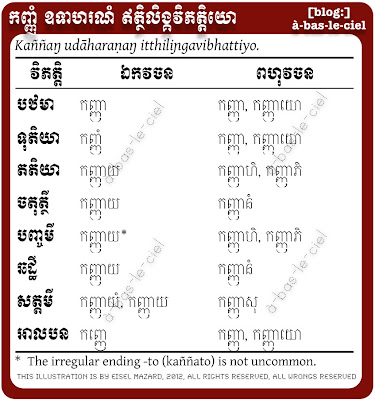 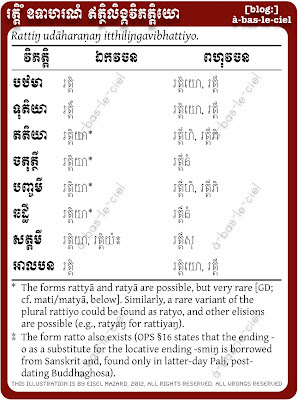 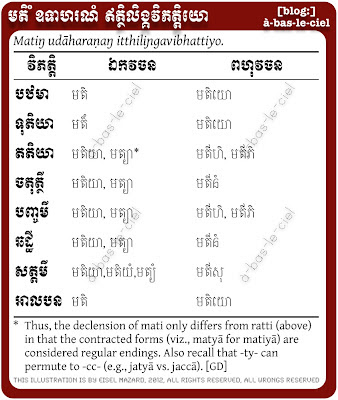 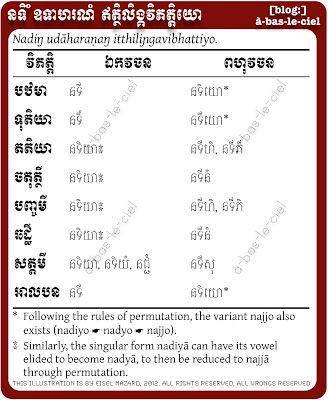 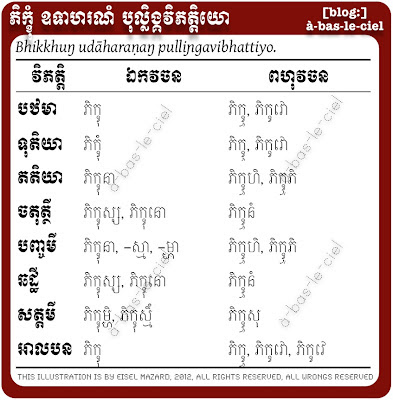 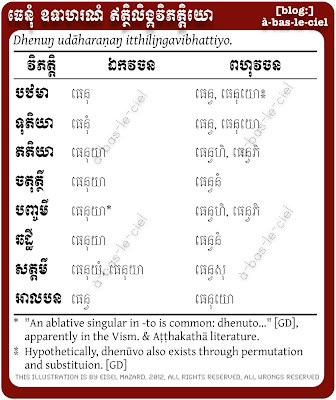 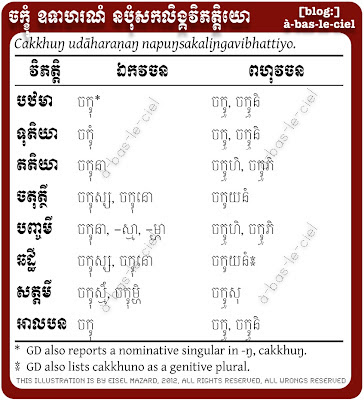