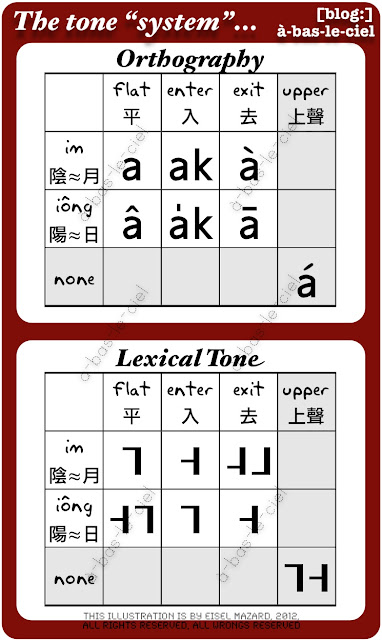 POJ is the writing system used to make the dictionary, and this is why students need to memorize the "lexical tone" of a word, even if it has no connection whatsoever to the spoken tone.  At a minimum, the lexical tone allows the student to discern some difference between chài and châi (and to find them in the dictionary), but the fact that native speakers of Hokkien have so much trouble guessing the written form of these tone-markings (from the sound of a word) is a hint at how tenuous the link is between the orthography and the "parole" of the language.

For a student of Hô-ló, this is a problem encountered on about three different levels:

• There's an asymmetry between the lexical tones (ā, â, á, etc.) and the traditional idea of what the tones are supposed to be.  On the charts, for example, the tone described as "flat" in Chinese [平] is not the tone marked as "flat" (ā) in English; I'm left to wonder if POJ might be better off marking the vowels as "im" [陰] and "iông" [陽] instead of using the arbitrary numbers 1 through 8 (or the even more arbitrary lines above the letters, that neither relate systematically to the Chinese categories, nor to the numbers).  You may also notice that the tone called "upper" (上聲) is actually spoken as a falling tone [˥˧] but is marked in POJ as if it were a rising tone: á makes less sense than would à in this case.  Again, I wonder why the English didn't just directly adapt 上 in some way (as with 平 before).

• There's an asymmetry between the lexical tones as they're written and the tone actually spoken "lexically" (i.e., when the word is said in isolation, or sometimes at the conclusion of a phrase).  Lexical â is supposed to be a "low rising tone" [˩˧] and if that were true, the marking â would be fairly confusing, as the shape of the tone would be á (rising) not â (up and down).  However, the reality is that lexical â (a.k.a. tone 5) first gets lower and then rises (˧˩˧) --or, at least, this is the tone as it now exists in 21st century Taiwan.  In other words, â is supposed to be providing a mnemonic for a tone that would naturally look more like ǎ (and the symbol ǎ doesn't exist in POJ).

• There's an asymmetry between the traditional categories for the tones [陰 vs. 陽, and 平 vs. 去, etc.] and the tones as they're actually spoken.  Given the geographic (and historical) distribution of Hokkien dialects this isn't surprising, but it is, simply, a problem that the student has to encounter and deal with: memorizing that â = 陽平調 won't help you figure out the lexical tone of a word you've just heard (but have never seen written).

My perspective on these problems is different from that of other foreigners because of the variety of languages I've worked on in the past.  Although languages like Lao and Thai are not described in terms of "lexical tone", the reality for most students is similarly arbitrary: you need to learn a bunch of markings that are added above vowels that have very little predicatable relationship to the tones as they're spoken aloud.  This involves a lot of "brute memorization" (as Victor Mair would say) but it isn't too brutal if you just regard the tone-markings as an arbitrary system separating dictionary entries.  I find that the most embittered students are the ones who actually go around trying to pronounce the words following the de jure system of rules found in the dictionary (and who are then frustrated by now idiosyncratic the reality of tonality can be in the given language).

With Lao and Thai, I certainly met foreigners who had tried to believe the myth of textbook tonality: they were told "just memorize this chart, and you'll know everything" --and they responded by jejunely expecting that the chart really would provide a set of prescriptive rules for the langauge.  At some point, they've got to figure out that the charts are neither descriptive nor prescriptive (and, to keep it in perspective, imagine how difficult it would be to provide a table that was truly prescriptive just for the pronounciation of English vowel sounds: there's a lot of guesswork involved based on the context, the dialect, and there exceptions to every rule, even in a very robust and well-documented spelling system).

Unfortunately, the use of Pinyin (for Modern Standard Mandarin) has promoted the notion that tonality (in all tonal languages) is far more regular and predictable than vowel-sounds in English; the reality is that neither the tones nor vowels sounds are predictable (from the written form) in any actually-spoken-brogue of Chinese.

There's an empirical study of Taiwanese tonality (available as a PDF) by Wi-vun Taiffalo Chiung.  The emphasis of that study is to draw attention to generational change in the tonality of the language.  What I would instead draw your attention to is (simply) that people don't speak the tones the way they're written (not even in the audio recordings that come with the textbook), partly because the writing system itself was never an attempt to accurately describe the sound.  Lexical tones very indirectly and imperfectly relate to any spoken form of the language; and the question of the (still more difficult) "contextual tones" isn't even touched on in Chiung's article (nor in this one!). 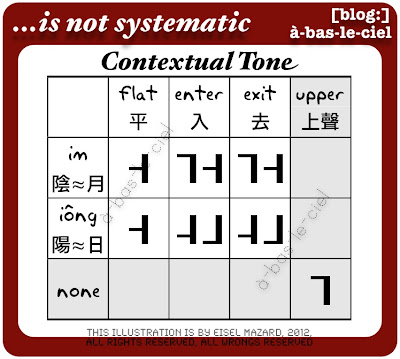