Getting hate mail from a fellow vegan youtuber: "Vegan Footsoldier". 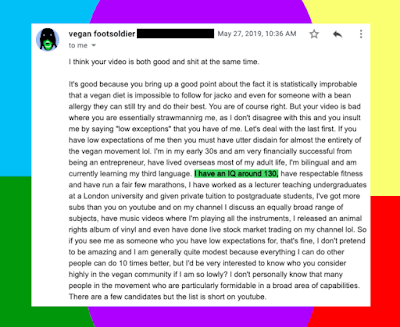 I am indeed totally unaware of your previous videos on util [i.e., the critique of Utilitarianism] because I haven't watched them. If you don't like util, then that's great! I think the online vegan space would be a better place if less people were into crazy nonsense bullshit like util. You may have also began publicly hating util before I did and I'm fine with you being the winner of that competition.

I openly admit I didn't have a good grasp on philosophy when I first started my channel but at the time that wasn't the purpose. My channel was initially supposed to be a vegan music and comedy show. But my general impression is that, I went from not knowing anything about philosophy the start of 2017 to binge learning ever since and now I'm pretty confident discussing and debating meaningfully with people who have formally studied it. Whereas with you, you seem to have always had some high school level understanding of philosophy since you started your channel but you have never demonstrated in any videos that I have watched, that you have even a first year undergraduate student level of philosophy on any given issue. In the same way you claim to be fluent in Thai and Laotian but I have never heard you speak any other language than english.

[Note to the audience: notice how he says that I "claim to be fluent in Thai and Laotian", rather than actually referring to anything I've ever said or written on the topic —i.e., he's either unaware of or intentionally lying about what I've said (repeatedly, and at length) about my experience with the language, and about forgetting the language. He tries, from the outset, to make it seem as if I've offered outlandish claims, that I cannot support; but even the first half of that equation (i.e., the outlandish claim) is just his own invention.  He has been to Chiang Mai many times, and he's probably met other vegans there, who saw me speaking Thai with taxi drivers and fruit vendors —but no, I would not claim to be "fluent" in Thai —I merely happen to be infinitely more advanced in the language than he is!]

I do not mean to say you can't, or you are not secretly a philosophy post grad, it means I have personally yet to see any such video which demonstrates a level of competence with philosophy in which I would expect you were educated to even undergraduate level. I have made plenty of phil videos now, and done dozens of public live debates. You still after 5 years won't even have a discussion with me on anything, let alone do a live debate on a given proposition, even one of your choosing, despite me having extended that invitation many times.

Here is a video where I present many positive cases for veganism and discuss their merits and shortcomings, including a few arguments I personally developed: https://www.youtube.com/watch?v=jZFIDFi1gzI

Do you have a specific video you can share with me which makes a positive case for veganism which you think is of a good quality, which discusses real philosophy and not just personal opinion responding to people you disagree with?

Look, you'll find any excuse to denigrate me and insult me: just admit it to yourself.  You're EXTREMELY biased in seeing what you want to see, and ignoring everything you don't want to see —and this has been a pattern with you for five years (or however long I've known you, and it must be at least five years at this point).

Do I know anything about philosophy?

How about Buddhist philosophy, does that count?

How about classical Chinese philosophy, does that count?

How about Ancient Greek and Roman philosophy, does that count?

How about Marxism/Communism (i.e., from an ANTI-Marxist, Anti-Communist perspective), does that count?

This is not an exhaustive list, but these are examples of areas of philosophy that I have made numerous youtube videos about —and they could (hypothetically) provide some basis for you to show some positive respect/appreciation toward me.

That never happens with you.

It doesn't matter if I speak Chinese on camera, or if I show you my Chinese handwriting: you have no positive interest in anything I've done —you ONLY look for an opportunity to denigrate and insult me.

Honestly, this is less of a problem for me than it is for you.

Again: you supported Durianrider.  How?  You saw what you wanted to see, and you remained oblivious to things that you did not want to see.

What you will say, inevitably, is, "Well, I haven't seen any of those videos!"  For years, when I offered evidence of what my channel actually said on any given issue (even Nina and Randa) you'd write back saying, "Well, you can't expect me to watch SEVERAL HOURS of your videos!" —and the reality is that if you wanted to have a sense of how much or how little I know about philosophy, you would indeed need to listen to several hours of my video —OR ACTUALLY READ MY WRITTEN WORK.

You are aware that I have written work, right?

Re: "You still after 5 years won't even have a discussion with me on anything, let alone do a live debate on a given proposition, even one of your choosing, despite me having extended that invitation many times."

Look, I don't know if you've been diagnosed with something or not: if you just pause to reflect even on the videos you made and deleted yourself (without me going back and screen-shotting old emails, etc.) can you admit to yourself that this is totally false?

How about your claim that you've never seen me speaking Chinese?

This was recorded during an entrance examination I took for a university Chinese language course (no preparation, no dictionary, no notes, etc.) just a few weeks ago: https://www.youtube.com/watch?v=FYvjEdJELwU

As you can imagine, this was done via ZOOM due to Coronavirus restrictions.

Ah, yes, there certainly is a dearth of evidence of how philosophically sophisticated a person I might be, Footsoldier!  Just as it is really difficult for you to find evidence of my history of language ability in Chinese, etc.!

You're a person I have zero respect for, intellectually or ethically.

And let me say this to you directly, Footsoldier: I don't believe ANYTHING that you tell me.  You claim you don't believe how much Chinese I've studied (although I can show you evidence, including certificates I've earned for studying the language, etc.)… let me say… NONE of your claims have ANY evidence to support them… you have NO writing, NO published work, and NONE of your videos demonstrate that you EVEN have a high-school level understanding of any of the books you CLAIM that you've read.  When you say you've read a book, I assume you HAVEN'T read it, because I know you're a person of zero integrity: the same way that you lied about Durianrider, you'll lie about anything else.  You'll tell any lie, and you'll believe any lie, just to aggrandize yourself and to denigrate others —you've been doing it for years, and you're not about to change.

I thought you would have figured this out by now.

And dude, look in the mirror: if you really think I can't speak Chinese… how the hell does that help your ignorant ass out?  If you think I'm lying about what I achieved in Pali, Laotian, etc. (more than 10 years ago)… how or why does that make you feel better about yourself?  Look in the mirror and think about what an enormous level of effort it would take for me to falsify the record of what I've accomplished (languages, research, publications, formal and informal education)… and now look at what you've done in the last five years of your life, and how little you've got to show for it.

There's no evidence that you're an intellectual, Foot.

You don't have what it takes to live "the life of the mind" right now.

And you never will.