The Mythification of Barry Lord (i.e., My Deceased Father). 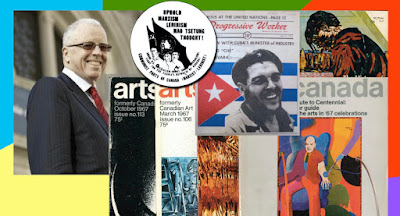 It's always easier to glorify people after their deaths, but Barry did make efforts to set the process in motion while he was alive, participating in a grossly dishonest "documentary filmmaking" project called Museum Maestros that contains innumerable cringe-inducing moments, if you know the difference between what it conceals and what it reveals (and I have heard —directly— how much that film hurt some of his other sons).

At any rate, one can't blame journalists for engaging in a kind of hagiographic approach to "the man and his legacy" as most of them work from a simple list of his accomplishments and the titles of the books he published, without even looking at (let alone reading) the books —and certainly without questioning his bizarre political history (linking him to Communist extremism, etc.).

However, when people within my family engage in this kind of glorification of the "great man", I do my small part to put a stop to the mythmaking —and, frankly, I think that many of them fear to talk to me for this reason.

Hi Eisel my daughter saw you were still in town recently from the bus. Bruce and I are moving to Europe for a year so perhaps could have a chat before leaving.

See below re your father...

[A message within a message ensues, written by the same Susan.]

I had a lovely visit with artist Pat _____ who is turning 95 this weekend  She just happened to come across this photo so I took a quick snap of it! I also shared a couple of photos of Barry with her.

Pat had many lovely memories of Barry from the 1960s onwards and considered him like a younger brother. She remembers when he lived in Vancouver when Adam and the boys were young.

She recalls how intelligent Barry was and how jealous other men were of him. She recalled receiving a phone call from Barry at 6 a.m. circa 1966 or so offering her a travelling exhibition in the Atlantic provinces when he was based in New Brunswick. She also spoke highly of his poetry and making a mobile out of his poetry. She spoke of his time at artscanada and what he did innovatively with the magazine.

Pat gave me a copy of her autobiography which I look forward to reading! She’s well known in countries around the world. I had met her briefly over a period of several years before  I found out this connection to Barry.

Yes, your daughter may well see me from the window of a bus, or through the strange window on the world provided by YouTube.

I knew who Barry Lord really was.  I knew the face, I knew the mask, and I know the difference between the two.  You never will.  Never.

You're a gossip.  Understanding other people requires detachment and compassion --not as abstract virtues, but as analytical tools.

My father an English professor taught me that the root of the word gossip is sibling or relation to god.  I could apologize if you were to be more specific about the issue that caused offence?

You're never going to apologize.

And I'm never going to forgive you.

If you want to know what I've been doing in the last 8 years, you can watch it on youtube, like anyone else.

You can buy and read the books I'm publishing, too (certainly a lot less boring than Barry Lord's history of publications!).

If you want to know who Barry Lord really was, there is no better source (and there never will be a better source) than my own youtube videos.

That's who Barry really was: he was a very malevolent, mean-spirited person, who enjoyed torturing his employees in the manner described.  He wasn't like that once in a while: that's who he was ALL THE TIME.  This relates to his history with Stalinism, Maoism, Fascism and even Christianity (that he would always call, "Christian Existentialism").

There are many, many videos on the channel that reflect (in depth) on who the man was (politically, ethically, personally, psychologically, etc.).  If you're actually interested in knowing who Barry was, I can tell you: that artist (95 years old, with a few anecdotes from cocktail parties) cannot possibly tell you.  I can.  I did.  And you don't have to reconcile with me to hear it, because it's publicly available on youtube.

There is nobody alive who knew and understood Barry better than I did: I stayed at home with him through the whole of my university years, and we had in-depth discussions (during lunch, etc.) one-on-one nearly every day during that period (when I was, intellectually, an adult).  Barry himself acknowledged this, and Gail still acknowledges it.  When I say "Barry acknowledged this" I mean: he explicitly and directly said it to me, in the period when we spoke (prior to his death) after ten years of invidious silence.

Nobody else knew Barry the way I did.  Nobody ever will.  Gail was very much blinded by her love for the man, and "fair enough", whereas other people are blinded by their hatred of him / resentment and disappointment toward him.  The flattering image you've set out of Barry, in this one email: do you think the mother of Joshua _______ would agree with it?  Do you think Joshua _______ himself would agree with it?  No.  But, as I say, those people don't know Barry the way I do (they never did and they never will) so their judgement only goes so far, and remains at a rather shallow level.  Nevertheless: their sorrow matters.  It matters much more than an artist with a vague recollection of Barry preening at cocktail parties in the 1960s.