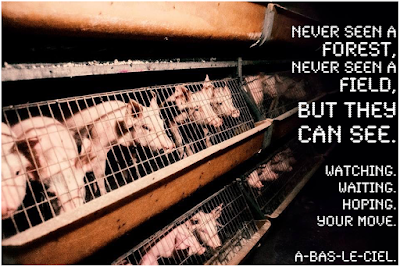 I used to do this more often, back when I had a (dedicated) vegan blog.

The source of the photo is unknown to me, credited just to "Animal Rights Protest Photography".

In reality, too, there's only so much to see, and only so much to say.  I wouldn't really want to make a hobby of this.  Gary Francione has taken up ranting that undercover documentaries and photographs of farm conditions are "useless" because they don't show anything new, and won't change anything (etc.).  Although I think he's wrong (really: dead wrong), I can imagine how he feels, as he will have seen thousands of similar images for so many years.  And one more image seems like it won't make a difference.

By the same token, however, I wouldn't want my own web-presence to become as repetitive as Marvel Comics became (over during those same decades). :-/
Posted by Eisel Mazard at 09:01