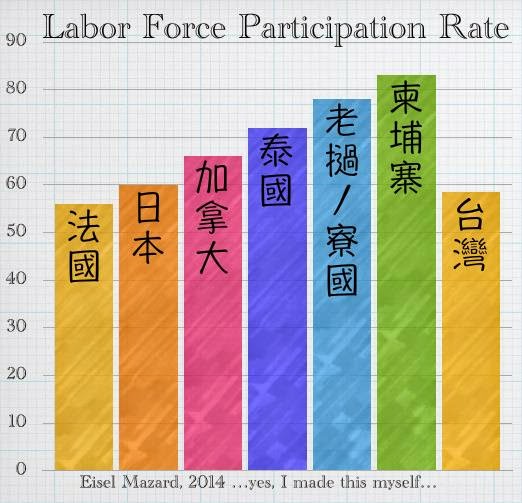 Currently, Taiwan hovers around 4% unemployment (and people complain that it is not 3%).

That is an amazingly low number from a European perspective or a Canadian perspective, however, we can view it with a difference sense of scale when we place it alongside the labor-force participation rate.


The latter is rarely quoted: people tend to only look at this figure when there's something misleading about the unemployment number.

For France, in 2012, the participation rate was only 56%. This means, in effect, that unemployment in France (perhaps 10.4%) is even worse than you might assume, as there are so many people who fall into categories of "not working" that do not count as unemployed (including students over the age of 15 and retired people, but also joblessness of various kinds that does not get counted as unemployment in its technical definition).

However, to rapidly cover the top end of the spectrum:
So, the informal impression that there is employment for every man, woman and child in Cambodia has a lot of truth to it: very few adults are in school, very few people are retired, and almost nobody is unemployed (sensu stricto).

I was astounded to discover, by contrast, that Taiwan's 4% unemployment rate is counterposed to a 58.5% labor-force participation rate (Jan. 2014).

Evidently, many people in Taiwan are jobless, but are not counted as unemployed. The island has high rates of retired persons and university students, but this still leaves something up to the imagination in understanding the qualitative gap between the 4% unemployment rate and the 58.5% participation rate.

Still to this day I hear pronouncements from governments around the world declaring that the largest number of people possible should remain in school for as long as possible (there was a lot of talk of this kind surrounding Obama's recent resolutions on student debt).  However, when we look at "highly educated" countries like France, we're also looking at frighteningly low participation rates, and these two factors are indeed linked.

Presumably, there are no governments actively aspiring to be at the opposite end of the spectrum with Cambodia, but there are still hard questions to be asked about the implications of a society designed for the majority of the population to be underemployed (if not entirely unemployed) through many years of university education (and, likely, in the years immediately thereafter as well).

Nobody sincerely believes that higher rates of education in societies like France and Canada will ever reduce unemployment rates to the levels now achieved by Taiwan.  On the contrary, countries like Taiwan (that imitated western-style university education on a massive scale) are now afraid of being trapped in the same malaise as France and Canada (where a university diploma, or even multiple diplomas, followed by a job in retail is indeed the "normal" pattern of both individual and national under-performance).
Posted by Eisel Mazard at 21:30