Richard Dawkins Eats Meat and Makes Excuses for It

Richard Dawkins is not vegetarian, and never has been; but he's got a lifetime of lame excuses and diversionary tactics behind him, whenever the ethics of meat-eating comes up in conversation.

Following after the image, below, I provide the full quotation (and the link to the interview it comes from). 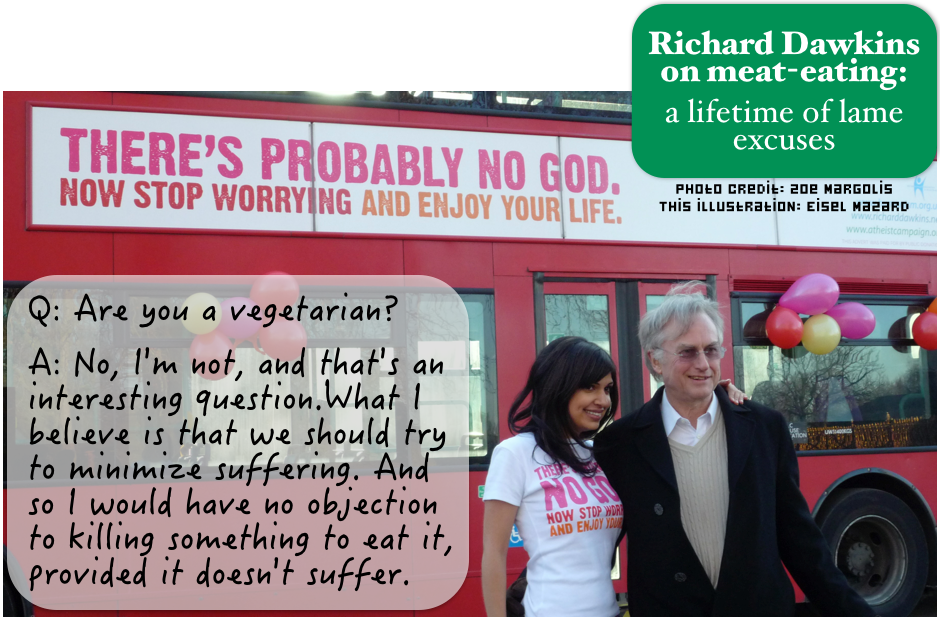 Ironically or not, a quick google-search reveals that the woman posing next to him, in this photograph, is, in fact, vegan (click). Here's the quotation in context:

[Q:] "You mention in the book that you are appalled at the works of liberal thinkers from 100 years ago—I think this is part of 'The Grasshopper's Tale.' You are appalled at their comments on race, and you wonder what scholars 100 years from now might be appalled at. You speculate that it might be our treatment of other species. This made me wonder: Are you a vegetarian?"

[A:] "No, I'm not, and that's an interesting question. What I believe is that we should try to minimize suffering. And so I would have no objection to killing something to eat it, provided it doesn't suffer. So I'm much more worried about the suffering in slaughterhouses and in factory farms—the dread that might enter the mind of a cow or pig when it's being led to the slaughter. To the extent that slaughtering practices are humane, I see no objection to using animals for meat."

"The objection to using humans for meat would be not just that they are human, but that they would feel fear, they would know what was coming to them, they would be in a position to suffer in a way that a pig or a cow, if it was well treated, would not. So my aim would always be to reduce suffering, not to take a kind of absolutist position that there is something special and unique about humans which entitles them to exploit and use other species of animal for any purpose."

Here's the link to the source of the quotation: http://www.americanscientist.org/bookshelf/pub/richard-dawkins

Well… he now has had a lifetime of excuses and poorly-stated pious intentions on the matter.  Unlike other religions, there's nothing worth boasting about in a death-bed-conversion to veganism; either you're vegan while you're alive, or you're not vegan at all.  We're all on the same diet once we're in the grave.
Posted by Eisel Mazard at 06:02