How the Beatles Influenced Buddhism (via "T.M.") 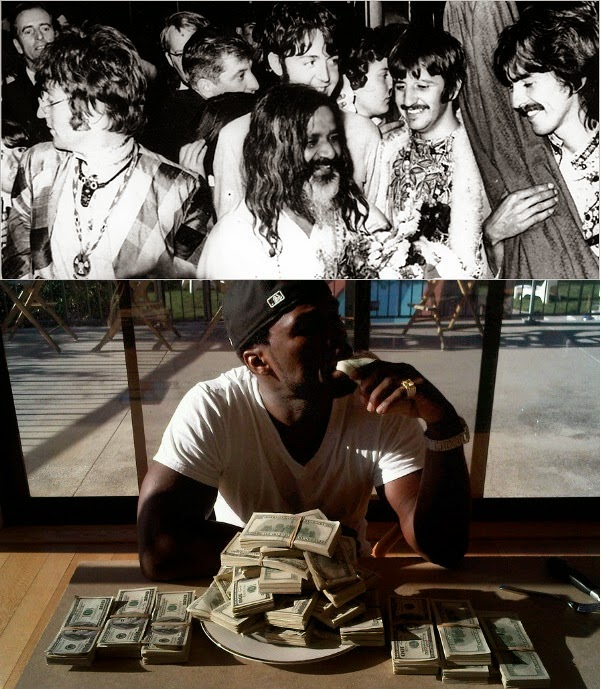 [Question:] A bit of a flippant question, so I won't be offended if you don't want to stir this particular pot any longer... but why do you think there's such a strange passion among westerners to believe that eastern religions are not religions?

[My reply:] I think it's a very meaningful question (and I'm not offended by it at all)…

The packaging of Buddhism for western consumption has tried a variety of strategies, some sui generis, and some in direct response to other precedents (and competition from other religious groups, making the leap from East to West).

Many of the people who promoted Buddhism (sincerely or insincerely) were influenced by the (short-term) success of (so-called) Transcendental Meditation, that was marketed by Maharishi Mahesh Yogi (who was photographed with the Beatles, appeared in Time Magazine, etc.).

The promoters of Mahesh's Transcendental Meditation absolutely insisted that it was not a religion (backed up with various pseudoscientific claims), while at the same time openly engaging in and promoting Hindu rituals (and preaching distinctively Hindu religious beliefs) that can hardly be called a part of a secular program (let alone a scientific one).

Quote, "One example of the marketing is 'The TM Book,' a paperback written by two then-TM teachers in 1975 and distributed by the movement. […] The book is illustrated throughout with two cartoon characters representing a TM teacher and prospective meditator. On the next-to-last page of the book, the prospect gets out of his chair, stands up, puts his finger in the air and declares, 'I'll take it!' as if he'd just finished the negotiations for purchase of a used car. […] First, the program is presented as being more important than pretty much anything else in life, can influence all aspects of one's life, and that acceptance of the program can cause profound positive change in one's life; in this sense, the program emulates religious faith, certainly a 'born-again' faith hinging on a one-time 'decision' as it often appears in American culture. Second, the program is a package, a consumer product, marketed as if it were any other product, where 'I'll take it!' indicates a decision to buy. Nothing special is required - the prospect need not learn new skills or meet anything other than the most simple requirements. The 'easy'-ness and 'effectiveness' of the product are in the forefront of the sales pitch for it."

The source of that quotation, above, is a very informative blog called TM-Free; another useful source is suggestibility.org.

Large-scale, money-making, headline-grabbing success of this kind influenced many religious leaders in the 20th century (not just Buddhists); although I think the success of Mahesh's methods has dwindled over the decades, this provided a tremendously influential model (and one that really had no precedent within the history of Buddhism).

On the other half of the equation, you have small (but vocal) numbers of people who really want to believe the pseudo-science justifications they've been offered as part of the package deal (i.e., "meditation as a science", etc.) and who therefore find it offensive to hear that the self-evidently religious practices they're engaged in are --simply-- religious.

[Note: you can find some related reflections in my youtube video, "Atheism, Empirical Attitudes and Buddhism", and, from a very different angle, in another video titled "Buddhist Meditation is NOT a Science of the Mind".]
Posted by Eisel Mazard at 10:14