March, 2019, Monthly Financial Report: How Much I Make From Youtube. 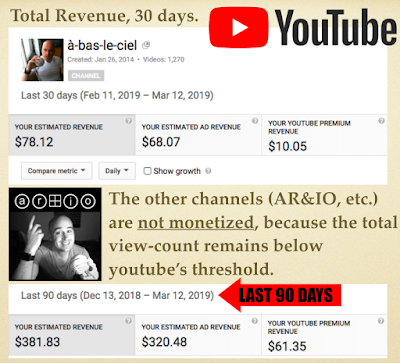 IMO, if you're going to ask for donations, you should provide this type of clarity: as you can see, the youtube channel generated merely $78 in the last 30 days (!) and the actual amount I'd earn would be less than this.  With both Youtube and Patreon, some portion "evaporates" before it reaches the content creator's bank account.  With this caveat (about "evaporation") having been stated, the amount I earn from Patreon is publicly visible on the front page, and that is now $155 per month: https://www.patreon.com/a_bas_le_ciel/
Posted by Eisel Mazard at 00:10

Erin Janus Will Have Her Revenge. 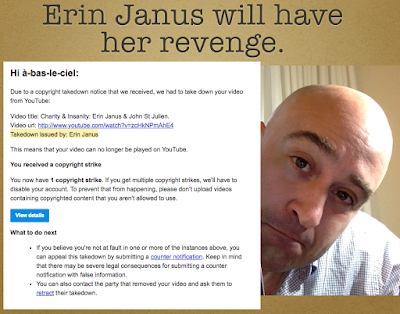 A false copyright claim (and a copyright strike!) from Erin Janus.  Note that she is playing the game in an attempt to silence criticism: what she wanted was not to claim the revenue from the video (this is more common, e.g., if you quote a corporate source on youtube) but, instead, she's trying to get the video deleted.
Posted by Eisel Mazard at 21:05

The role of the author in the paperless age. 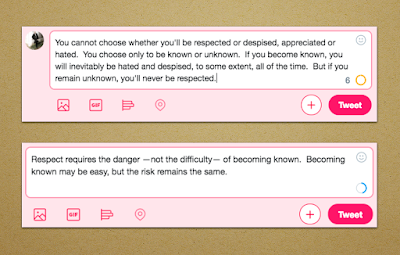 You cannot choose whether you'll be respected or despised, appreciated or hated.  You choose only to be known or unknown.  If you become known, you will inevitably be hated and despised, to some extent, all of the time.  But if you remain unknown, you'll never be respected.

Respect requires the danger —not the difficulty— of becoming known.  Becoming known may be easy, but the risk remains the same.
Posted by Eisel Mazard at 06:29

How Buddhism is Taught in Canadian Universities.

I provided this critique (below) in response to the assigned readings
(in PAAS100) on Buddhism.  I wrote separate messages about Daoism as it was covered in the course, also.

I am probably the only student who actually read the assigned texts on
Buddhism [note: for this particular course, this is not an unreasonable assumption!];
however, I still think it is a non-trivial fact that the
assigned readings were of such extremely low quality (not even acceptable for high-school readings), and full of absurd biases and factual errors.

I presented these issues to Prof. Iles back in September (including the message below); although he was very polite and courteous in his response, he did, simply, say that nothing in the course was going to change (he had done it the same way for so many years, and was going to continue doing so).  He also claimed that he had not said anything factually wrong; I was able to provide examples (from his lectures, not just from the assigned readings) of real factual errors.

I regret to say that the assigned readings from Edmund Holmes and the
(anonymously written?) Spice Digest are truly wince-inducing.  None of
the authors concerned had access to primary sources in any language
(and it shows).

To offer a value-neutral example from the Spice Digest, it claims:
"After the death of Buddha, there was no one to take his place or to
lead the new religion."  This is false, and it is a telling falsehood.
We have quite a lot of interesting (primary source) material
concerning who inherited power (and why) at the time of the Buddha's
death (a subject that was evidently contentious amongst monks at the
time, and it became recorded history for that reason).  It would be a
remarkable error for even an undergraduate student to say that
Buddhism was a leaderless religion at the time of the Buddha's death
(on the contrary, it was very hierarchical!); and yet this source is
presenting this false claim --to an audience of undergraduates-- as a
simple fact.

The Spice Digest section on Buddhism in China opens with the flat
statement that "in Chinese legend" Laozi and the Buddha are considered
one and the same person.  Although this legend may exist somewhere (or
may have existed in some period of time), it has never been part of
canonical Buddhism, and I think the vast majority of both Chinese
Buddhists and Chinese Daoists today would be surprised to hear it.
The text states this as a simple matter of fact, with no caveats.
Given the way this is written, a student would be entirely right to
take notes on this, and then report it back to you (as a matter of
fact) in an essay or exam, i.e., working out some chain of reasoning
starting with, "Given that the Chinese believe Buddhism was founded by
Laozi…".

The section on the Spice Digest's first page, "The Legend of
Shakyamuni", was apparently written by someone who was unaware of the
chronological difference between the legends being reported and
canonical Buddhism.  Ashvaghosha died circa 150 AD; this is a
significant number of centuries after any the composition of any
canonical source (and yet the reader is given no sense as to what the
source of "the legend" being related here might be).  This sort of
lapse in sources and centuries would not be acceptable for a
university-level textbook on any other religion, and it would not be
acceptable for a university level reading on (e.g.) the philosophy of
Aristotle or Socrates.  A text written several centuries after the
death of Aristotle (and in a language other than ancient Greek) would
not be presented in this way, as a definitive statement about
Aristotle (nor even as a definitive legend!) --or, at least, not
without some serious caveats, explaining the source and the century it
came from.

The book-chapter by Edmund Holmes would have been considered badly
biased and flawed in 1919 (there were excellent studies of Buddhism in
print in that era!) and it is still terrible today.  It presents
itself as a very casually-written tertiary source (the author clearly
has never looked at a primary source in his life).  However, the
sources he relies on are themselves examples of "the blind leading the
blind".  For example, he is quoting the English poet Sir Edwin Arnold
(d. 1904) as if he were the Buddha himself (i.e., as if a modern,
English poem, written out of pure fancy, could be quoted as
representative of "Buddhism", or as the words of the Buddha!).  Edwin
Arnold was not a scholar of Buddhism, and neither was Edmund Holmes;
but in this chapter, undergraduates are being shown quotations from
the original fiction of Edwin Arnold as if they were direct quotations
from the Buddha (and they will not be able to see the absurdity of
that fact without researching several stages beyond the footnotes).

Edmund Holmes was evidently cultivating himself as a religious leader
in his own right, and he presents some of his own religious views here
as if they belonged to the Buddha.  Pretty much every appearance of
the word "soul" is wince-inducing; and he intentionally rejects the
fundamental tenet that "there is no soul" (also translated as "there
is no self") to instead argue --dishonestly-- that, quote, "The
distinction between the higher and the lower, the real and the
apparent self, is at the root of Buddha's moral teaching, as it is of
Christ's."

That is not Buddhism (it is very nearly the opposite of Buddhism!) and
it is a thesis woven into the whole chapter in a way that an
undergraduate student could not possibly decode.  If there is one
tenet that could be called a universal and unifying doctrine of
Buddhism, it is this idea of "no soul / no self"; but here students
are instead being shown an intentionally skewed summary of Buddhism
that not only minimizes this tenet, but tries to replace it with the
author's own ideas of "the higher self", the soul, and so on.

With thanks for your patience and interest,
E.M.
Posted by Eisel Mazard at 16:50