In both symbolic and economic terms, 21st century Mongolia is defined by the railway that links Russia to China.  This railway was created by a handshake between Joseph Stalin and Zhou Enlai in 1952, (Rossabi, 2005, p. 226) and it is a strategic connection that Russia and China are still competing to control today ("A new Great Game has started between China and Russia to control the direction and route of Mongolia’s railway lines," Bulag, 2010, p. 100).  In this interstitial economic position, Mongolia is always in danger of coming under the overweening influence of one or the other of its two neighbors, if not both.  In contrast to the Soviet period, Mongolia has effectively avoided such domination since 1989 through what we could call "a democratic gambit" that has paid off.

There have been some remarkable political events in Mongolia just within the last few months of 2014, but they are, perhaps, remarkable for being unremarkable: they affirm what Western Democracies would consider to be "normal politics", in stark contrast to what passes for normal in the rest of post-Communist Asia.  Reuters reported an orderly parliamentary vote to remove the Prime Minister, with 14 days of debate ensuing to select a replacement. (Reuters, 2014)  This deliberative transition-of-power may be favorably compared to recent events in the would-be democracies of Thailand, Cambodia and Myanmar (dare we say Laos?); and, of course, it is an even stranger contrast to Mongolia's immediate neighbors, Russia and China.


One quite attractive thing about the Mongolian transition [to democracy] was that we made the political and economic transitions side by side. Some skeptics say that it’s impossible to make dual transitions, political and economic transitions, in Asian countries. But Mongolians broke that stereotype. We proved that it can be done in every country, in every corner of the world; it can be done. We proved that… Imagine—just 20 years ago we had a North Korea-like society and today we are chairing the Community of Democracies…  (Elbegdorj, 2011, p. 179)

In asking when and how Mongolia made its transition to democracy, we have a useful metric provided by the Freedom House rankings of political rights scores.  We can see at a glance in figures 1 & 2 that Mongolia underwent momentous change of some kind in the years 1989–1991, in a transition punctuated by elections in 1990 and 1992. 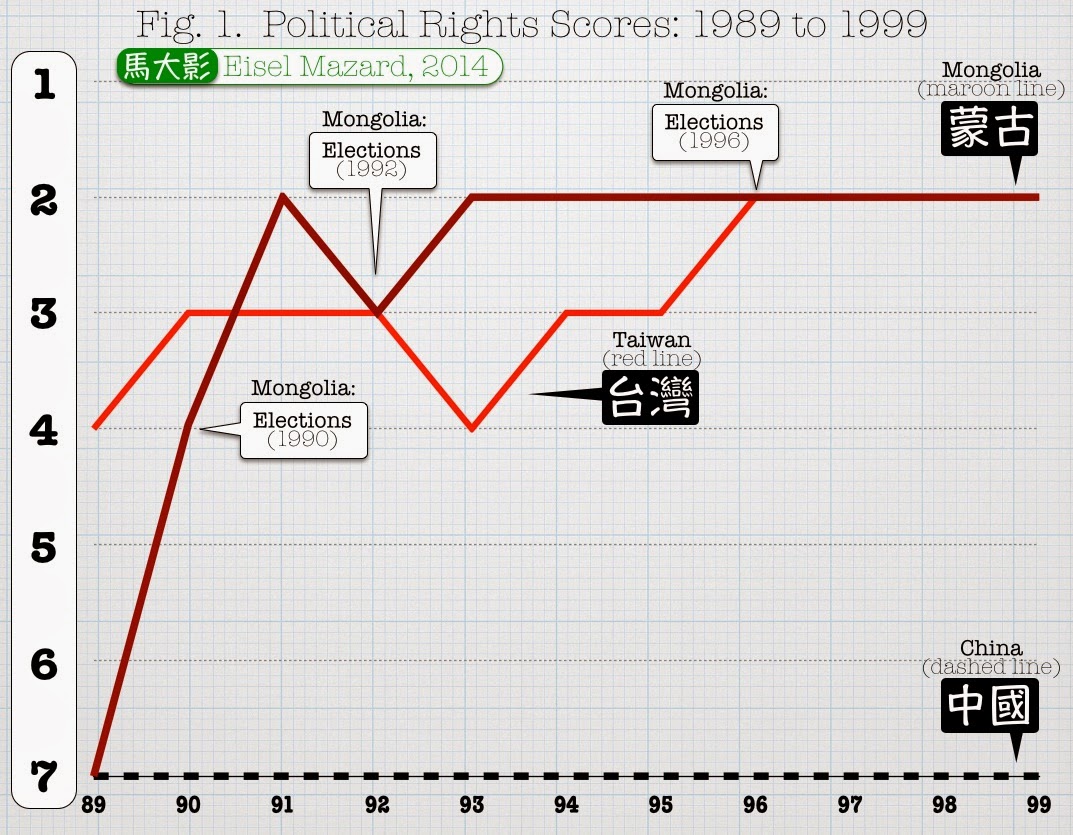