Language-instruction videos: why are the actors always flirting? 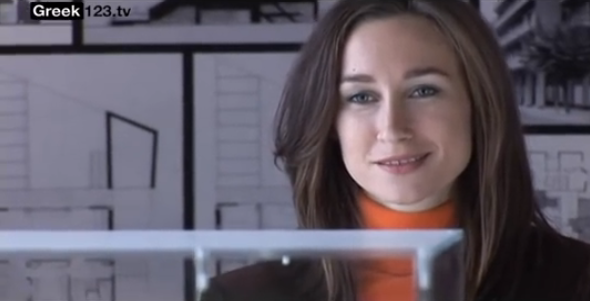 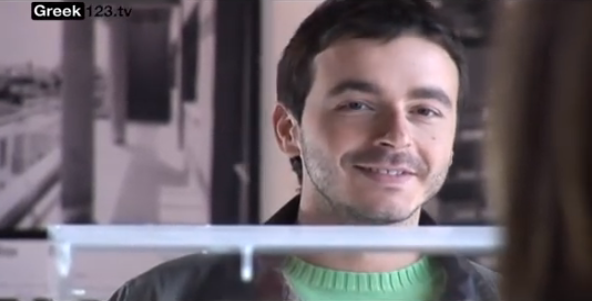 Admittedly, I'm offering a somewhat infamous example from a Modern Greek language course here, but in almost every living language I've studied, you run into this again and again, and you find the students laughing at the material…

…because it seems flirtatious even when the script doesn't remotely call for the actors to be flirting.


In large part, the flirtatious tone must reflect the boredom of the actors, who are being asked to recite the script at a slower pace than they normally would (so that the words can be heard clearly), but some portion of the blame goes to the writers.

The most commonly used university-level textbook for Chinese is devoted to the dull romance of 王朋 and 李友 (not to mention 高文中 having "a crush" on 白英愛, etc.).  The internet is full of exasperated complaints from students about the content of these dialogues that they're forced to memorize (sometimes humorous, sometimes reflecting real disappointment); reportedly, the acting (and flirting) in the videos often caused the students to burst out laughing, for reasons that the Chinese instructors couldn't understand (well, just look at that Greek video I've linked to… sometimes, people communicate a lot with their eyes). 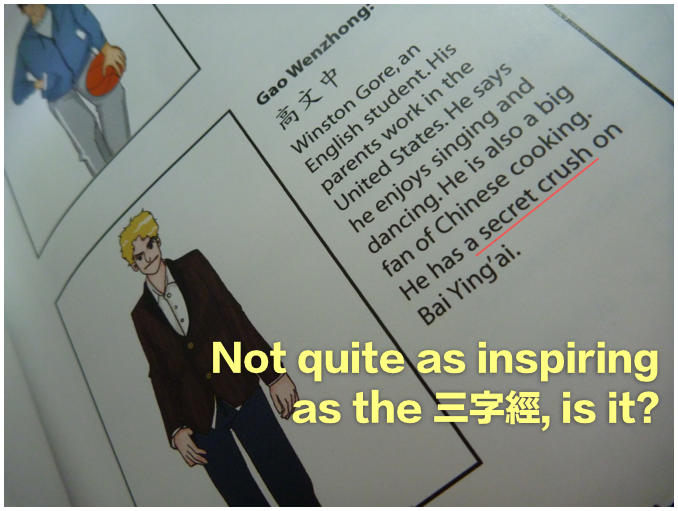 Every language of formal instruction has an unseemly contrast between the nationalistic pretensions-to-greatness that are impressed upon the students (the trivialities of French grammar are justified by the alleged greatness of French literature, civilization, etc.) and the very humble (often embarrassing) pedagogical materials that actually present the language to foreigners.  Take a look at the dialogues in any language-textbook made for an adult audience, and ask yourself if these words are really deserving of memorization.  For an adult, it is much more rewarding to put excruciating effort and focus into a text that means something, rather than a text that means nothing, even at the first levels of learning (when the process of making that effort is more slow, etc.).

Students may be able to convince themselves that great literary accomplishments (or remarkable historical moments preserved in writing) deserve their intense focus, and even memorization.  However, the only texts that adult students actually do memorize are these absurd, half-hearted romances, cobbled together by for-profit textbook companies (with a long list of collaborative authors) with very little art or meaning.

Regardless of the language I'm studying, if I have to memorize sentences (as examples, paradigms, or just as practice) I would strongly prefer to memorize something that could remain meaningful for the rest of my life --not something that will aggravate me with a sense of its triviality from the moment I lay eyes on it.

It is considered very old-fashioned to have students read aphorisms or quotations from historical figures (when was the last time you saw the word "chrestomathy"?); however, if you're talking about a classroom of motivated, mature students (not children, and not reluctant students who need to be "tricked" into learning) there might be more value in the old-fashioned memoriter texts and aphorisms that were formerly used to teach languages (e.g., the 三字經, 千字文, etc.) than educators now suppose.
Posted by Eisel Mazard at 21:46