Note: this was written in reply to a specific Patreon supporter who was describing his own (ongoing) projects in life —projects that are partly inspired by my philosophy and are partly (of course) his own thing.  However, it works as a generalized statement so well that I can share it here without changing much of anything.

Look, here's my experience in life:

(3) Nobody ever tries to impress me.

(4) No matter how low my expectations are, everyone lets me down —like, people are constantly turning out to be WORSE than I could have EVER IMAGINED them being.

Yes, this includes people very close to me (my parents, my brothers, the various women who have been my lovers, etc.) but it also includes more distant relationships you've seen on youtube.

Did I ever expect "Faraday Speaks" (a.k.a. Caleb Cain) would turn out the way he did?  I believe he has now deleted every trace of himself (from youtube, etc.) that he has the ability to delete (but videos interviewing him on other people's channels still remain).

Did I ever expect ModVegan would turn out the way she did?  (Again, she's deleted everything, etc.)

I could attempt to make a list of people I've known in humanitarian work, in studying Chinese, [in ecological politics, in Buddhist scholarship, in First Nations politics,] etc. etc. —but there's no point.

This is my experience.

…dude, when I had a newborn baby in my arms, and I sent photographs of myself holding that newborn baby (as an e-mail attachment) to all my friends, colleagues, and relatives, what do you think I heard back?  NOTHING.  When I celebrated my 40th birthday, my 41st birthday, etc. etc., what effort did anyone make to show that they cared about me?  Who tried to surprise me or impress me?  And yeah, I could here specify NOT EVEN the people whom I've done tremendously caring and surprising things for (on their birthdays, or on other, similar occasions) made any kind of "reciprocal" effort.

Yeah, maybe it turns out you're gonna be the first exception to the rule, and your boasting IS NOT BULLSHIT: maybe you're really gonna accomplish something great.  It's very hard for me to be optimistic, just given my experience in the last 8 years, let alone the last 40 years.

Dude, how many people have made a youtube video in response to either one of my books?  We could add "podcast", etc., as it isn't just youtube videos that count.  AFAIK, the grand total = 1.  Think about how little effort that kind of video is, compared to other forms of collaboration.  And now think about how many videos you've seen on my channel in the last five years that anyone else contributed anything positive to, that anyone else collaborated in the creation of, in any way whatsoever.

Dude, I reached out FOR ANYONE to collaborate with me in studying Chinese FOR YEARS AND YEARS AND YEARS —including the years when I was in Taiwan and Yunnan (and years in Victoria in-between).  You wanna know how much positivity I got back?  ZERO.  Just women who wanted to have sex with me —white women (studying Chinese) just as much as Chinese women, I should add.

Money, fame, power, respect, sex —not necessarily in that order.  And the sad fact is, that so few people are even motivated by these things.  Most people are so intellectually inert, they can't be motivated at all.

"And let's be clear, help can include advice."  The link should take you to the 4:52 mark; if it doesn't work, click ahead to that point.

One of the viewers of the channel reminded me of this video from two years ago (!) that foreshadows my current crisis.

Should my books be translated into other languages?

[Someone wrote in proposing a Hebrew translation of Future of an Illusion, but this answer would apply (mutatis mutandis) to any and every possible language that either one of the books could be translated into.]

More people live in Beijing than live in all of Israel.

Suppose I had received a similar offer from a young man of the same age living in Beijing, offering to translate Future of an Illusion into Chinese.

(And this would be a lot of work.)

There is only one reason good enough to justify the effort: this young man thinks, "If I translate this into Chinese, and my name is on the cover next to the author, SOONER OR LATER it will bring me in the company of precisely the kind of people I'd want to meet."

He thinks, "Maybe not today, maybe not tomorrow, but AT SOME TIME over the next 20 years, this book is going to get me invited into the company of some vegan intellectual worth talking to, some would-be revolutionary worth talking to, etc." —and perhaps this would be true.

China has 1.4 billion people: perhaps within the span of 20 years there would be two or twenty dissident intellectuals worth meeting —and this translator would eventually be able to say (when he is 50 years old, in retrospect) that he is glad he translated the text because it brought so many friends/colleagues into his life (people he otherwise would not have known at all, or people whom he would not have gotten to know well).

There are barriers.  How would even 100 people end up reading the book (in Chinese translation) in China?  Perhaps he needs to advertise the book or give lectures on the book at vegan conferences, etc. —I have no idea.  There are barriers to even the humble estimate of 100 people in China reading the book in the span of 20 years.  If he promotes it, or if SOMEONE promotes it, yes, it could reach thousands or millions of readers —but just 100 (out of one billion) might be unattainable.

This reflects the overall death of the vegan movement —it actually DOES NOT reflect a decline in the quantity or quality of viewers on my channel.

So, is it a good idea for you to translate the book into Hebrew?

Yes, it is possible that your translation of the book will have an impact with 100 Israelis, or 1,000 Israelis —and it is possible it will reach an audience of this size immediately (not over the span of 20 years).  That's possible.  But you must think about how disappointed and sorrowful you'll be if you struggle to translate the text into Hebrew and then it reaches only five people, and brings nothing positive into your life.

That is the only answer to your question that matters.

If I told you that I didn't want the book translated into Hebrew, but you were optimistic that the translation would bring just 10 new colleagues into your life over the span of 20 years, then it would be worthwhile for you to do it —and for you to do it for yourself, for your own benefit, not for mine.

Living for the Tunnel 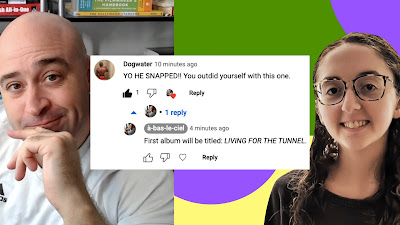 There's no light at the end of the tunnel, so I'm living for the tunnel.

According to google, I am the first person to use the phrase LIVING FOR THE TUNNEL.  Hard to believe, but… google wasn't exactly designed to be a foolproof index of minor witticisms, new coinages and catchphrases. 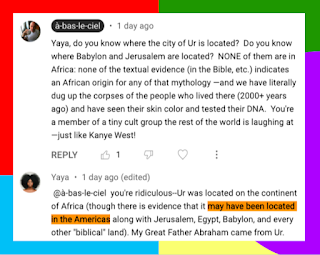 Their ideology demands that they pretend there is something mysterious about the location of the city of Ur; as I already explained in my video, the location of Ur is probably the most thoroughly established fact in the history of archaeology, the history of anthropology —or, simply, in the history of the world.  It would be easier to come up with a new theory for the original location of London at this point (because there's been more research into ancient Mesopotamia than pre-Roman England!). 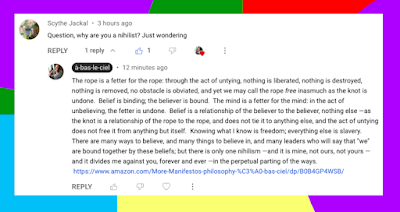 "Question, why are you a nihilist? Just wondering."

The rope is a fetter for the rope: through the act of untying, nothing is liberated, nothing is destroyed, nothing is removed, no obstacle is obviated, and yet we may call the rope free inasmuch as the knot is undone.  Belief is binding; the believer is bound.  The mind is a fetter for the mind: in the act of unbelieving, the fetter is undone.  Belief is a relationship of the believer to the believer, nothing else —as the knot is a relationship of the rope to the rope, and does not tie it to anything else, and the act of untying does not free it from anything but itself.  Knowing what I know is freedom; everything else is slavery.  There are many ways to believe, and many things to believe in, and many leaders who will say that "we" are bound together by these beliefs; but there is only one nihilism —and it is mine, not ours, not yours —and it divides me against you, forever and ever —in the perpetual parting of the ways. 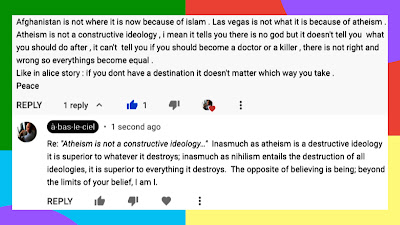 You know, when Matt Dillahunty is dead and gone, he'll only be remembered as a (ranking) competitive video game player —nobody will remember him for his words.  I'd like to imagine that the books I've written will "live on" in a somewhat different fashion.  ;-) 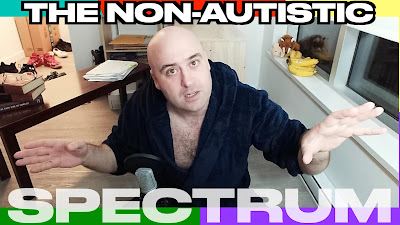 Yes, that's right… the opposite of the autistic spectrum…

the spectrum of everyone else…

Google informs me (although I find it difficult to believe) that I'm the first person to "deploy" the concept of "the non-autistic spectrum"… whether in earnest or satirically… or neither… or both.

Dog freedom is not freedom freedom. 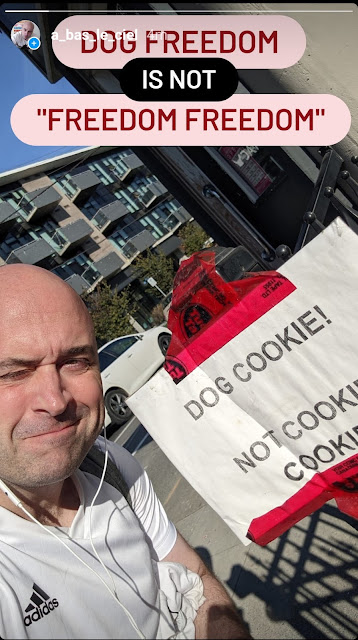 Please allow me to add: Canadian democracy is not democracy democracy.

The Worst of the Worst: Just How Bad Does Youtube Censorship Get?

This is an old example from my channel, but I think it's important enough for me to "immortalize" it on this (public) blog:

"Why was this video deleted from youtube?  Why did I not receive an email advising me?  Why did I not get the opportunity to appeal a strike?  I do not think procedure was followed here: there was no notification, no review… and no violation."

The video that was —thus— censored is one of the least offensive I have ever made, not even reflecting on why I quit Buddhism, but, instead, reflecting on the ways in which I still regard Buddhism positively, after quitting: https://www.youtube.com/watch?v=pvgjZS-lGZY