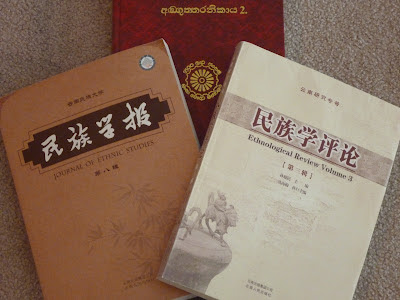 As I'm aware that these things are unseen and unheard of outside of Mainland China, I thought that I would share the paper-and-glue reality of the academic publications that resulted from my time there.  The Aṅguttara Nikāya (a big, red book) is included in the background to provide a sense of scale: for whatever reason, Chinese anthropology is issued in big, heavy, bilingual tomes. 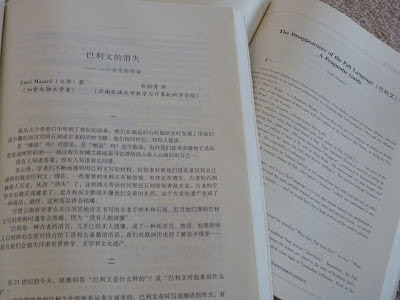 • 《巴利文的消失:一個實用的指南》,《巴利文的消失:一个实用的指南》, published in Chinese translation in Yunnan's Journal of Ethnic Minority Studies, 民族大學雲南 (peer reviewed [同行評審] and published by the University of the same name, Min Zu Da Xue).
• 2010, "The Disappearance of the Pali Language: A Pragmatic Guide", the English version of the article above was separately published in an English-language journal of anthropology, The Ethnological Review, from Kunming University Press.

One further article was supposed to be published as a book-chapter in mainland China (it was the ill-fated "Canon and Reason…") and remains as-yet-unpublished in both Chinese and English.
Posted by Eisel Mazard at 12:59