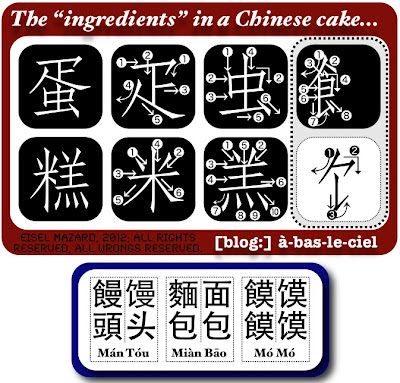 China has its own tradition of breadmaking, and the terms used for different types of bread are likely to be among the first words you use in daily life.  However, the distinctions between different types of bread are not consistent from one region of China to another; within any particular city, restaurants will use these terms in different ways, reflecting the cuisine they represent, or the restaurant owner's origins.  There is no reliable way to anticipate if (e.g.) mán tóu will be plain white bread, or if it will be a filled bun, or a deep-fried doughnut; this is especially difficult for vegetarians (the presence or absence of meat has to be checked every time).

The character dàn (蛋) is comprised of two elements, stacked vertically.  The first five brushstrokes are the "bolt of cloth radical", pǐ (疋).  The lower half of dàn is the radical chóng (虫), meaning "insect".  This is one of many ingredients to be wary of in Chinese cakes.

The first six strokes of gāo (糕) are the compressed form of mǐ (米), "rice".  This can also indicate a unit of measure (i.e., the length of a grain of rice, also used in ancient India, including Pali).  In contemporary usage, 毫米 is one millimeter.

The right-hand side of gāo (糕) provides the phonetic hint; as a separate character, this is gāo (羔) meaning, "lamb", and it is considered an elaboration of the simpler character of yáng (羊), i.e., the "sheep radical".

In the lower half of the illustration, you can see the difference between the simplified and traditional forms of various types of Chinese bread.  A recurring issue here is the simplification of half-width version of "the food radical", shí (食).
Posted by Eisel Mazard at 17:28