The Opposite of Nostalgia (Laos, Cambodia, Thailand) 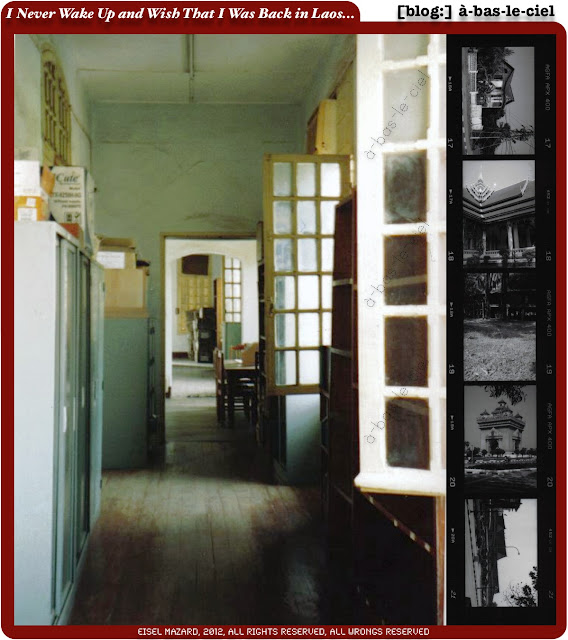 I never wake up and wish I was back in Laos.  Never.

I had a conversation in Lao a few weeks ago --the first conversation I'd had in the language for several years.  The man I spoke with asked when I planned to go back, where I most desired to go back to, and so on.

Although I was limited (and out-of-practice) in the answer that I could offer, one of the first things I said was along the lines of, "Everywhere in the world, people have problems; everywhere you go, life is a struggle".  He was astonished at this answer (perhaps because it was a ponderous contrast to how poorly I was able to communicate in the language).  He pressed further, asking about specific towns in both Laos and Isan.  I confirmed that I had been to these places he named, but that I didn't expect to return, and I didn't particularly want to see any of them again.

It is interesting that the guy speaking to me expected me to feel this type of homesickness at all.  I suppose his expectation might be the result of having so many conversations (in his own language) with Lao expatriates and exiles here in Canada, yearning to go home, even if it is politically impossible for them to do so.  Of course, one of the first subjects of conversation was my attempt to explain that for me, also, it is politically impossible to return to the country.  I suppose he may have previously met a small number of white men who learned Lao as a language and who regard the place as paradise, or who at least recall it wistfully.

I'm neither Lao nor an expatriate, but I was exiled from Laos.  I never did regard the place as paradise --neither when I lived and worked there, nor in retrospect. 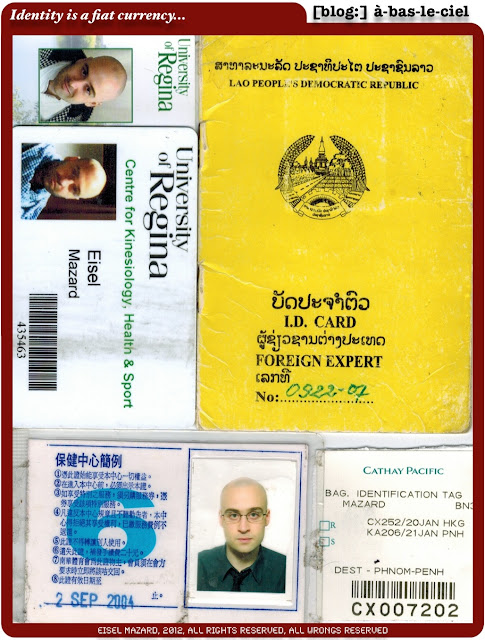 My years in Asia were a large percentage of my adult life, but they don't add up to all that much, from the perspective of someone born and raised in the region.  Still, the lack of stability that I found elsewhere (from Cambodia to Canada) makes the comparison very clear.  Although it was by accident rather than by design, Laos really was the only home that I ever had.  Still today, it is the only home that I've ever known.

I remember visiting a colleague's apartment in Cambodia, and remarking on a set of jars he had arranged along a wall: small efforts like that had become alien to me (to decorate one's own home, to settle down or settle in) because I had lived for so long out of a backpack, never expecting to stay in the same apartment (nor the same country) for any length of time.

That kind of chronic uncertainty surrounded me from the day that I was exiled from Laos.  My situation within Laos had been so bad that it seemed inevitable that I could find more stability thereafter in China, Thailand, or Cambodia.  That proved to be untrue.  I was in China during the Olympic terror (an especially hard time to be a foreigner doing paperwork in the P.R.C.) --and, of course, I arrived there as a sort of refugee (speaking only Lao, and not knowing one word of Chinese).  Subsequently, things didn't get any easier in Thailand or Cambodia.

The exile itself is a funny story, if told in a funny way, but the bare facts are grim: I was exiled with nothing but my backpack and a bicycle, after receiving death threats from a Communist Party official.  The threats were followed by my formal condemnation as a thought-criminal at a meeting (held with the big portraits of Marx and Lenin on the walls).  At this meeting, my former co-workers (at a Belgian-government-funded charity) were each required to read a statement aloud apologizing for not having denounced me earlier.

I was told that I would never be allowed to re-enter the country --but I was forced to test the veracity of this threat (eventually) because the only money I had was in a bank account inside Laos.

I received an array of responses from my contemporaries (both Lao and foreign).  For the most part, people were indifferent, often justifying this with reference to past examples of people whom they had heard of in similar straits.  Everyone had a story about someone being kicked out of the country for no good reason at all (sometimes, the story told was about themselves, and their eventual "rehabilitation" within the government).  They said these things to make my circumstances seem commonplace, but the comparisons were always facile.  The purpose of these stories was, for the most part, to dismiss me (and whatever my situation might really be).

Conversely, one Lao woman who had formerly believed that I was a C.I.A. agent interpreted the circumstances of my exile as proof that I had never been working for the agency.  Perhaps this was because nobody had come to my aid.  Perhaps, in her eyes, the whole mess demonstrated that I really was a hapless Pali scholar, trying to examine stone inscriptions and palm-leaf manuscripts, while volunteering for humanitarian work, and so on.

Although both perspectives (on my supposed C.I.A. status) were simply stupid, I thought there was something slightly ingenious on the part of the woman who reversed her opinion in light of the facts.  I suppose there must be some strange optimism amongst people who believe that the C.I.A. would employ someone to study Pali, and so on.

My lack of nostalgia for Laos doesn't have much to do with the circumstances of my exile (nor with what happened after that).

I adored the language, especially the written language, and I cherished the opportunity to pursue (i) philology, (ii) fieldwork, and (iii) humanitarian work of some kind, simultaneously, in a setting where each of the three inspired more of the other two.

My own education (so much mired in Cold War politics) was useful in the Communist setting in a way that it couldn't be anywhere else (except, perhaps, North Korea, etc.).  Although other people regard the place as exotic, I found it easier to understand Laos than Hong Kong, Bangkok, or Taiwan --perhaps easier than anywhere I had lived before.  The combination of political science and Pali that I brought to Laos seemed tremendously useful in that cultural setting --and I gorged myself on the history and politics of the place.  However, my time was spent at the libraries: I never drank alcohol nor ate meat, and these were simple but insuperable barriers between myself and the people around me.  I didn't pretend to have anything in common with the culture I was studying.

Most of what I liked about the country couldn't be described as "good" --and much of it is tragic.  The potential to do good in a place where it was needed was inspiring, but the reality of that need is nothing to be nostalgic about.  My agency handed out sacks of rice to people who really were suffering from "seasonal starvation" and malnutrition; although memorable, it would be impossible to be wistful about the experience.  Likewise, the situation for scholarship of any kind (Pali included) was parlous; I enjoyed decoding the mix of propaganda and misinformation that surrounded me, but I can't glorify that experience in retrospect, either.

All the while, the basics of food, shelter, and finding enough silence to sleep in were very hard to manage.  Everywhere I went it was very, very difficult to get a full night's sleep: natural sources of noise pollution (roosters, dogs, etc.) were competing with unnatural ones (loud music at all hours, etc.).

My official identity card as a "foreign expert" in the employ of the Lao government was issued to me on the same day that I was informed of my denunciation and deportation (i.e., exile) from the place.  Likewise, my ability to really communicate in spoken Lao had only started to amount to something useful during my last few months in the country --and then, suddenly, I was gone, and I could never expect to return.

I never wake up and wish I was back in Laos.

I never wake up and wish that I was in Cambodia or Thailand, either.

I miss the opportunity to do meaningful work, but, aside from that, there's nothing for me to miss there.

I don't think there's anyone in Laos who misses me, either.  There may still be some memory that there once was a man who came to study Pali in Laos --and that he ended up being exiled by the Lao government, on the same day that they issued his paperwork to certify him as a "foreign expert".
Posted by Eisel Mazard at 00:06