Translate Your Own Ashokan Inscription 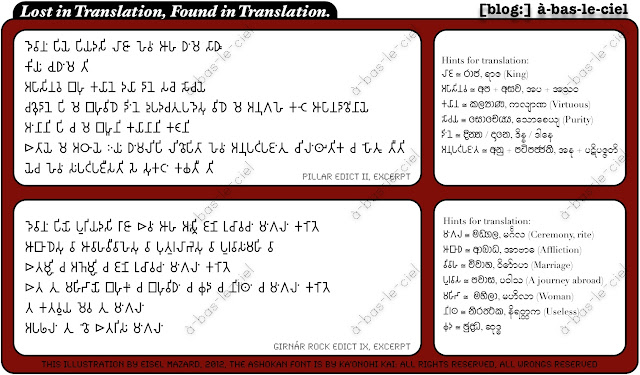 Another illustration that speaks for itself: two excerpts from the inscriptions of Ashoka* with just enough educational material provided on the right-hand side (as "hints for translation") that you should be able to translate it for yourself.

* [Yes, it's more properly written as Aśoka, but really we should all be calling him King Piyadasi, if we're reading the inscriptions for ourselves, right?]

Although this provides you with a tiny vocabulary to work with, even this small sample is enough to illustrate (once again) that the inscriptions are neither in Pali nor in Sanskrit… and yet the language is close enough to Pali that you can normally guess the meaning if you're accustomed to reading the canonical language.

Sadly, the minor differences between the inscriptions and the canonical language have provided the soil for a hundred baseless theories to bloom forth.  The minor differences in spelling discovered in the comparison of one inscription to another has likewise inspired grand speculations and provided a pretext for various ideologies to advance their agendas.  Someone could put together a book surveying all the historical misconceptions and nationalist myths inspired by (the modern re-discovery of) Ashoka's inscriptions; they certainly span the world at least from England to Cambodia (with both India and Burma in-between).

My own small contribution to this field of study (at the intersection of propaganda and philology) is under the heading of "the Modern Myth of Suvaṇṇabūmi" (the former link is plain text, in English only; you could instead download the PDF, embellished with photographs and Cambodian translation  កម្ពុជាមិនមែនជាខេត្តរបស់ថៃនោះទេៈ រឿងប្រឌិតទំនើបរបស់ពាក្យសុវណ្ណភូមិ ).
Posted by Eisel Mazard at 19:56