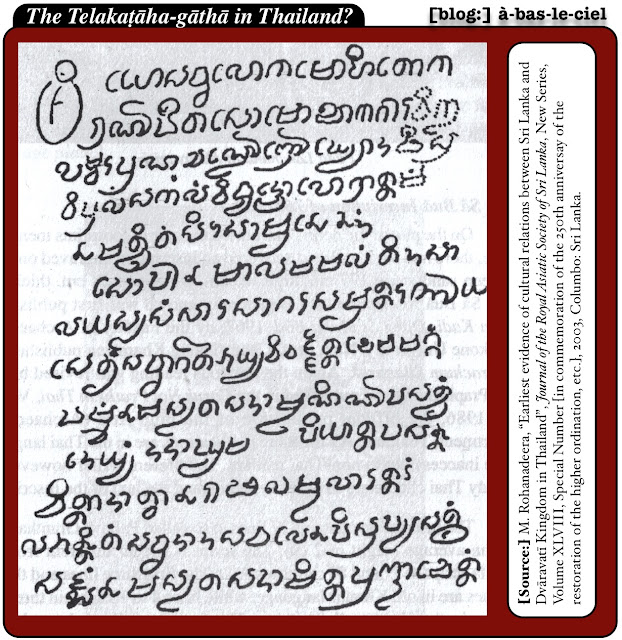 What if there were tangible evidence (written in stone) about the cultural contact between the ancient (pre-Thai) civilization of Dvāravatī and the island of Sri Lanka?  What if someone found a quotation from a uniquely Sinhalese text in a Dvāravatī inscription?  Well, maybe someone did, and maybe they didn't.

A scholar in Sri Lanka (M. Rohanadeera) published an interesting thesis on an inscription in Thailand in 2003.  In 2006 I wrote up a summary of of his thesis, and sent out a notice to the specialists then known to me (in Thailand, Cambodia and Laos) because I was aware that an article (in English) in an academic journal published in Sri Lanka would be "easily ignored" across the ocean to the east.

Of course, many of the replies that I received confirmed that the article had not only been ignored, but had been totally unknown to the specialists concerned.  People don't look for new studies of Thai epigraphy in Sri Lankan sources, and, sadly, both Asian scholars and Europeans often direct their attention solely toward European publications (ignoring whatever is produced on Asia within Asia).  However, I did receive one response from a scholar stating, on the contrary, that any real Pali scholar would read all of the major journals published in Sri Lanka on a regular basis; alas, this is another definition whereby the number of real Pali scholars would come very close to zero.

The contested stone is found in modern Prachinburi, Thailand; it is referred to as the Noen Sā Buā inscription; the date assigned to it is 761 A.D. (thus the term "pre-Thai"; various misconceptions about what the Dvāravatī era/civilization was still circulate, partly stirred by modern Thai propaganda, but partly just resulting from honest confusion and popular mythology).

Rohanadeera's claim is that the text of the inscription is substantially identical to three of the four opening verses of the Telakaṭāha-gāthā.  If true, this would have implications for the presumed date of authorship of the Telakaṭāha-gāthā itself, and also for the general subject of ancient transactions between mainland Southeast Asia and Sri Lanka.

In 2006, I wrote that, "…Rohanadeera's "eye-copy" of the inscription, provid[es] a very significant improvement (in terms of pure legibility) upon the reproductions of rubbings, or the Thai-script transliterations previously available."  Therein lies the problem.

I received a short notice (in reply to my own short notice) that the stone inscription concerned is genuinely illegible; this opinion came from a specialist in Cambodian inscriptions who had seen the original stone (and who did not rely on indirect renderings).

In other words, rumors of its legibility may have been grossly exaggerated.  Thailand has a bad reputation for making such exaggerations about its inscriptions (much discussed in the controversy over the Ram Kamhaeng stone) sometimes just resulting from a cultural assumption that it would be better to say something than for the stone to say nothing at all, and sometimes resulting from some particular scholarly agenda.

By definition, an "eye-copy" is a drawing.  It's an old-fashioned term, used in contrast to "hand-copy".  Rohanadeera's eye-copy is not a photocopy, nor a photograph, but a drawing that demonstrates his interpretation of what the text seems to say.

If the stone is truly illegible, it is possible that Rohanadeera's work has been inspired by the attempts of prior (Thai) scholars to render it legible; and it is also possible that some of his readings have been influenced by the same Thai transcriptions that he criticizes as faulty in his article.  If a series of scholars make (sequent) attempts to trace and re-trace the same set of outlines, something legible will inevitably emerge.

Conversely, there's the appealing possibility that Rohanadeera has looked at a stone inscription and simply read it more accurately than others have done before.  This appeals to human optimism in general, and also appeals to the general sense that a Sri Lankan scholar would bring a new perspective to a Dvāravatī inscription.  Alas, the year is now 2012, and I am unlikely to ever hear (or read) a further response to the controversy.

Thus the controversy is likely to end just where it began: with a single (interesting) article published in Sri Lanka, largely unknown in Thailand, and thus neither accepted nor refuted (although I've done my part to draw attention to this thesis for six years by now).

Addendum, June 6th, 2012.  Contrary to my expectations, it seems that I posted this article at just the right time, and it received a considerate response from several of the salient experts in epigraphy.  Replies came in from Michael Vickery, Bora Touch and J.C. "Chris" Eade.  The extent to which anything else written on the stone may or may not be genuinely legible seems to be a matter of no clear consensus, but it is remarkable that this short notice article (posted to a hitherto-unknown blog) was able to spur a re-evaluation of the evidence.

Two of the outstanding complaints about the inscription seem to be (1) a general agreement with my warning that the text is less legible than has commonly been supposed, with the lines of text supposed to iterate the date of the inscription considered especially dubious and, (2) that the particular date assigned to the stone should be considered false, along with concerns about an anachronism in the manner of the date's (supposed) recording.  There is a third suggestion now bandied about openly that (3) the entire inscription could be a fraud.  Perhaps it is because of the reliance on poor quality illustrations (and even worse transcription) that the participants in the discussion have been reluctant to come to a rapid decision on the matter; it was for this same reason that my own approach was to more vaguely suggest that the original inscription was much less legible than had been supposed --and that it had been "rendered legible" by wishful thinking on the part of the interpreters.  That hypothesis isn't fraud, but, of course, it doesn't exclude the possibility of fraud, and the possibility should be tested.  The problem with an argument for fraud is that it requires intentional deception; although that's not uncommon, it is even more common to encounter self-deception (with consequences quite unintentional).

A bibliography of just one entry: M. Rohanadeera, "Earliest evidence of cultural relations between Sri Lanka and Dvāravatī Kingdom in Thailand", Journal of the Royal Asiatic Society of Sri Lanka, New Series, Volume XLVIII, Special Number [in commemoration of the 250th anniversay of the restoration of the higher ordination, etc.], 2003, Columbo: Sri Lanka.
Posted by Eisel Mazard at 10:10