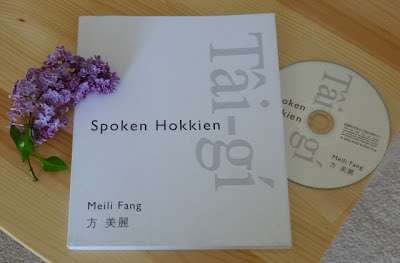 This is the first truly new textbook for teaching Taiwanese Hokkien (台語) to native speakers of English in a very long time.


Most of the materials available for this language (in English) are either directly or indirectly derivative of the work of Nicholas Cleaveland Bodman (whose career in Asian languages apparently started with deciphering Japanese naval code at Pearl Harbor in 1942).*  If you'd like to see a survey of the informal language resources now produced in Taiwan, there's a Youtube video providing an overview (in the most literal sense of the term), but you'll see that most of these are merely phrase-books (if they're produced for foreigners at all), or else children's books (that presume the child has grown up speaking Hokkien, to some extent, and has a parent reading the text aloud).

There has been remarkably little that's truly new since Bodman ("cold war" textbooks, some linked to the U.S. government, and other linked to Christian missionary groups); and, of course, one reason for this is the strange history of the suppression of the language itself (quoting Victor Mair, "Until the lifting of martial law on July 14, 1987, not only was it considered subversive to write in Taiwanese, one could be punished for compiling Taiwanese dictionaries and instructional materials, or even for speaking Taiwanese in public arenas such as schools, governmental bodies, the media, and so forth.").  So, if you're looking at textbooks to purchase online, you may be surprised to find that some of them are still sold with cassette tape.

So, anyone interested in learning or teaching the language will need a copy of this new book from Fang Meili for several obvious reasons:

• It was produced specifically for teaching Hokkien to westerners, and presumes no prior knowledge of any other Chinese dialect, nor of Chinese written characters.
(Don't believe me?  The methodology and rationale for the book are set out plainly enough in this PDF, 台灣語言在英國教學與發展情況.)

• It uses POJ (Pe̍h-ōe-jī) throughout, and that's means that you'll actually be able to use it with the existing corpus of dictionaries for the language.  Be warned: some of the other textbooks (and phrase-books) available neither follow POJ nor any other systematic transcription standard.  When you're at "level zero" with the language, you will need to be able to find POJ entries in whatever dictionary you have (digital or otherwise).

• The audio recordings are clear, high-quality, and provided on compact disc (which is what you'd expect for a book first produced in 2010).

What are the limitations of the textbook?
• You will immediately be wondering "where's volume two"?  The book is only 167 pages long, and you can indeed tell that each chapter was adapted from an in-class lesson (as is explained in the appendix).  As such, it is introductory, but not compendious.  It is well-suited to classroom use, but it is not a reference book.  The total range of vocabulary covered is limited.

• Within the limit of so many pages, it is understandable that the book does not include Chinese characters, but teaches the language exclusively in phonetics (POJ, aforementioned).  This is, however, a limitation (wait for volume two?).

To use an example (taken directly from Wikipedia) wherein a simple Min-nan phrase would not have a single character in common with "standard" Chinese expression:
i cháu bē kín (伊走未緊)
tā pǎo bù kuài (他跑不快)
It is true that the characters used in Taiwanese also exist in a Chinese dictionary (i.e., 伊 exists in both languages) but the more important fact here (from the student's perspective) is that the two phrases both sound completely different, and also look completely different.

This sort of asymmetry is worth knowing about relatively early in the student's education, partly because so many native Chinese speakers will insists that the opposite is true.  People will tell you every day that the difference between the languages is "merely phonetic"; just a few days ago a Chinese librarian insisted to me that the two languages are written identically in Chinese characters.  The simple sentence above shows that this isn't true, or that it is true only in some abstract sense (cf. anything written on pinyin.info about language-ideology, e.g. Victor Mair's comments, "The myth about a nation of Chinese speaking a single language made up of countless 'dialects' with only negligible differences of 'accent' continues to root itself ever more deeply in the global consciousness, plaguing common sense and scientific observation all the while.").  Perhaps this could be compared to someone saying that German and English are written identically, and merely spoken differently: every word in [the German phrase] wie geht es dir corresponds directly to an English word (and yet this correspondence is still completely incomprehensible if you don't already have a solid understanding of both English and German).
• The book is published in Europe --and that really is a limitation!  One of the reasons why I'm posting this brief review to the internet is that the textbook seems to be nearly unknown at present (and I assume that it is very hard to find a copy in Taiwan).  Whatever prestige SOAS may have as a publisher, they're really lousy as a book-maker: they put zero effort into transforming the author's manuscript into a book worth buying.

It has a plain, white cover, and plain MS-Word page-layout throughout the interior (with a plain white audio CD, too).  I put a flower next to the book in that photograph to provide some color (thus, you can tell that the photo isn't in black and white).  The book contains zero illustrations (cf. Comenius, the "inventor" of the illustrated vocabulary).  In terms of the quality of the paper and binding, let's face it: books published in Europe are now of much lower quality than books produced in Taiwan.  This is, perhaps, especially true of textbooks and non-fiction.

I was also very disappointed with SOAS's own online bookstore, in addition to the disappointing printing/production of the book.  Although it is more expensive to order the same book from Amazon, I can only say that you take your chances with a badly-managed and poorly-working system if you purchase directly from SOAS.  If you try reporting your problems to the SOAS bookstore, guess what?  The e-mail address doesn't work, and there's no other way to get in touch with them.

If you're expecting the book to arrive with a postage stamp from England, you'll be disappointed: it comes from some anonymous digital print shop in Germany.  The reality is that SOAS outsourced the production and shipping of this book to Germany (at the lowest possible quality), and they really have no executive control over the process.  It really seems that the publisher takes no pride or care in producing the book at all, and the results are sloppy (please note that I am not blaming the author for this at all).  Authors of language textbooks should seriously consider publishing with anyone else instead of SOAS (this is not the first disappointment I've had with their language materials); like many publishers in Europe's 21st century, they now compare very poorly to the Asian alternatives (including even alternatives printed in India).

In sum:
• Everyone needs to get a copy of the book, because it's the first truly new thing of its kind in a very long time.
• I'm looking forward to the sequel (volume 2?) as soon as possible.
• I'm hoping that both this book and the sequel can be re-published in Taiwan, where they would probably be able to produce the same book at a much higher quality for the same price, and where they would probably be better at international distribution as well.
Posted by Eisel Mazard at 08:51