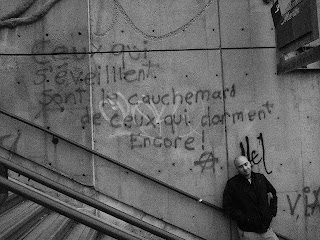 Is the phrase an original coinage?  Is it a translation of a slogan from another language?  Is it just a re-wording of a statement that I ought to recognize (but that google doesn't reveal a trace of, in this particular iteration)?

I infer that this slogan appeared in multiple cities in Quebec (more-or-less simultaneously) during the student protests of 2012; however, it is entirely possible that it could have been hanging on the walls long before the protests, and that I (and only a few others so far) happened to notice it during this (relative) flurry of street-writing (in cities that are, admittedly, already crowded with graffiti).

I suppose the possibility that the slogan was present (but more easily ignored) prior to the protests is appealing; so too is the notion that it could be a translation from any of a dozen traditions that spring to mind; however, both first and last you're left to wonder whether or not it might be a turn of phrase borrowed from one of the many historical figures who led (or preached in favor of) mass murder.  The trouble with an unattributed quotation is precisely this: it could be that a Québécois teenager came up with it in 2012, but, then again, it could be yet another echo of one of the 20th century's dictators reiterated (with or without irony) by another generation, in another language (either with new aspirations or the same old ones as before). 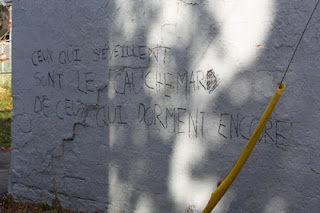 (Above, the same phrase as written in Montreal, as turned up by Tumblr: note the revision of the spelling from cauchemard to cauchemar; perhaps the "d" in the original of both inscriptions is a clue to the first language of the author?  "Ceux qui s'éveillent sont le cauchemar de ceux qui dorment encore").
Posted by Eisel Mazard at 21:48