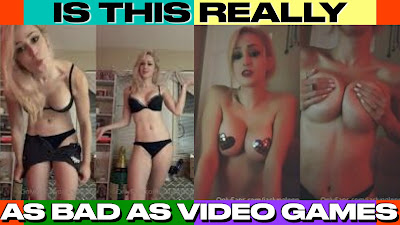 Your videos that show people who really effed themselves by falling into their addictions and then your commentary on those, really drives home the message for these other things.

Also I did want fame and wealth too, but that's not the end goal anymore. You're right that I should make the effort in trying out things just for the sake of doing them, even if I end up as a failure in them and nothing comes about it, the fact that I tried is meaningful enough, more meaningful than the success ever would be. I don't want to end up like those "successful" people who do nothing but waste their lives all day.

I'm really "a moderate" on both of these issues, but I'm perceived as an extremist, because we live in such an immoderate culture.

From my biased perspective, is it possible to play SOME video games?  My honest belief (applied to myself and my daughter) is, "yes", but I keep having encounters with particular examples of people who are so susceptible to addictive behavior that it seems the answer may be "no" --i.e., I may be rather too moderate (although I'm perceived as extreme in my critique of video games).

To give an example, I often point to "Pacman C.E." as a positive example of a game that can be played for a maximum of five minutes (this exists as an 8-bit Famicom cartridge, but is primarily played on emulators).

However, I've received emails from people who were SERIOUSLY ADDICTED to games that were even more simplistic than that --games that lasted two or three minutes that they would play, repetitiously, for many hours.

Now, as you know, I'm living in a country and culture where the vast majority of people think it's totally acceptable for adult men to spend 20 hours per week playing video games --so I'm perceived as an extremist in any case.

So, by the same token, at what point is pornography a problem for people?

If we're talking about 5 minutes here and there (say, 35 minutes per week, even if not distributed evenly as 5 minutes per day), then I really don't see the problem.

Do people fail courses in university because they're spending too much time watching pornography?

The equivalent, for video games, is at epidemic levels: a large percentage of high school and university students are either failing in school, or learning nothing in school while passing, precisely because of video games.  However, is there a significant percentage of people ruining their lives (in this same way) by spending a similar number of hours watching pornography?

How many people per year get fired from their jobs because they stayed awake all night watching pornography?  (The equivalent does indeed happen with video games, stereotypically with MMORPGS.)

So, in short, I'm skeptical that pornography really presents the same kind of cultural problem (as video game playing).

So, honestly, my perception is that the inclusion of pornography in the same category as video games may be "a false equivalency".