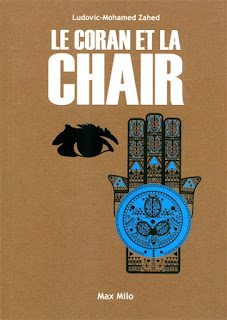 The author of Le Coran et la Chair is (understandably) getting a lot of press coverage for his recent marriage: apparently he had the first homosexual marriage conducted with Islamic rites.

Interestingly, the guy isn't just a Muslim, but he's also an ex-Buddhist:

"Despite his break with Islam, the young man still yearned for faith, and turned to Buddhism. 'But I realised that misogyny and homophobia were the same everywhere,' he told FRANCE 24, and gradually Islam re-conquered him."

Although my first reaction is to insist that no, they're not the same everywhere, this is also an occasion to pause and reflect on the fact that Buddhism has a high rate of conversion, it also has an extremely high rate of attrition.  I mentioned this in my two short articles on the (exceedingly small) number of Buddhists in the U.S.A. and in Canada.

Homophobia isn't the same everywhere: there's a border between Thailand and Malaysia, and the status of homosexuals is starkly different on the two sides side of that border.  The difference between Theravāda Buddhism and Islam is accountable for a large part of that difference (I dare not say all of it) --and Malays themselves will hasten to tell you that they practice a relatively relaxed form of Islam.

Conversely, even if we were willing to consider Sri Lanka as relatively homophobic (within the range of Theravāda nations) it is still much more accepting than the most liberal of Islamic nations (and many Sinhalese will complain that they've inherited the homophobic aspects of their current culture from non-Buddhist sources, including, of course, the missionary Christianity of several successive European empires).

Thailand today is a destination for homosexuals who are (for one reason or another) dissatisfied with their lives in neighboring Malaysia, Indonesia, and other majority-Muslim states --despite various forms of open racism that make their lives difficult as non-Thais in Thailand.  I haven't seen statistics for the phenomenon, but I have seen the phenomenon itself (I assume that someone doing research on sexuality in Southeast Asia has statistics on this?).  I don't know if this pattern will repeat itself in Myanmar/Burma in future.

At any rate, it seems that the author (Ludovic-Mohamed Zahed) made a well-informed rejection of Buddhism: he converted, and then converted back again.

In his interview with The Local, he comments, "Eventually, I realised there was a big hole in my life so I investigated buddhism, but discovered there are also buddhists who are homophobic."

Yep, we've got homophobes.  However, we also have a religion based on a belief in non-violence, impermanence, that there is no soul, that life is suffering, and so on.  Those might be reasons for some people to deal with homophobes in this religion, rather than dealing with the homophobes in other religions (that might both endorse the death-penalty, and consider homosexuality a death-penalty offense) --or the homophobes who have no religion at all.  Everywhere you go, it's a struggle; it's amazing that he has chosen to continue his struggle within a religion that is openly hostile toward him.

[The happy couple: rights to the photograph belong to The Local.]
Posted by Eisel Mazard at 14:25