FAQ (How to Ask Me Questions)


The blog now has a large number of readers (and, surprisingly, older articles that are long and substantive continue to receive new readers in steady numbers, presumably because the links to them are being circulated by e-mail), but those readers rarely send in questions.  Meanwhile, the small number of people who do write to me (with no prior introduction) tend to open their message by saying, "I'm sure that you get a huge pile of questions by e-mail, but…".


So, I've now set up a Formspring interface, so that readers can send in questions more easily (and as anonymously as you'd like).  The culture of anonymity is a strange thing; I have received anonymous questions that turned out to be from a Sanskritist whom I've known for more than 10 years.  Meanwhile, Cambodians are a small minority of my readers, but (so far) they've written the majority of my fan-mail (raising the question, is my blog any more flattering to Cambodia than it is to Laos or Sri Lanka?).

You can type the question into the form, above, or you can access the same service via www.formspring.me.  Of course, sending e-mail directly still works. 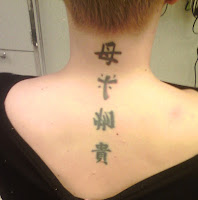 If I get any really interesting questions (or if I happen to have any especially interesting answers) I'll write them up as articles on the blog.  Conversely, questions of no general interest won't appear on either website (e.g., requests for recommended reading are more likely to be replied to directly, etc.).

As you may imagine, one of the most frequent questions I receive is advice on getting a Buddhist tattoo.  I have the impression that most people don't really want the answer they get in reply, and would have been happier making it up themselves (as lamented by Victor Mair).  I haven't yet received a "before and after" photo from anyone who took my advice (nor from anyone who disregarded my advice, I suppose) before getting a tattoo.

[Wrong on so many levels: a garbled rendering of 母_物贵… incoherent in any language]
Posted by Eisel Mazard at 10:27