I've only seen one critique of K.R. Norman in print, and the author was K.R. Norman himself.

As I have recently mentioned the paucity of criticism of Bhikkhu Bodhi's translations, a colleague reminded me that the scarcity of thought directed toward K.R.N.'s translations is no less dire.

In 2004, however, K.R.N. wrote a retrospective evaluation of his own translation of the Sutta-Nipāta (a collection of poems located in the KN, and usually given the confusing abbreviation of "Sn", not the same as "SN").  The article is unusual article for the genre, in that K.R.N. offers some evaluation of his own prior work, as well as reflecting on the strengths and weaknesses of the array of primary and secondary sources now available, including what could be called "his competition" (i.e., other translators who have worked on the same text in the years before and since).

"The aim of my [1984] translation [of the Sutta-Nipāta], as of those I have made of the Theragāthā and Therīgāthā (Elders' Verses I & II, London, 1969, 1971) was to produce a literal, almost word-for-word, translation which I hoped would, when considered alongside the original Pāli, adequately convey my understanding of the original speakers' words, i.e. to give the meaning of the text as it was intended by the original speakers, or as it was accepted by the first hearers.  This is not necessarily, therefore, the meaning it had for the later commentaries…" (p. 72)

If there ever were a crowd of Pali scholars gathered into one room, sharp gasps of astonishment might be heard in response to the last sentence there (although, as it happens, I completely agree with K.R.N. on this point myself).

In this 2004 essay, K.R.N. presents a shrewd argument: he demonstrates that several scholars claiming that they follow the interpretation of the commentaries do not, in fact, practice what they preach.  Instead, in the process of editing and translating, these same translators sometimes diverge from and contradict the commentaries (when they see the latter's interpretation to be wrong) and sometimes misrepresent the commentaries, as a way of misrepresenting themselves.  This pokes holes in the premise that the commentarial "layer" is entirely consistent with the (more ancient) primary source --and it also erodes the translators' claims to represent (in English) some kind of continuous religious tradition.

Although K.R.N. does not explicitly state this in his article (and, really, he should spell it out more clearly) the underlying contest here concerns the vague claim to "traditional authority" made by his rival translators.  K.R.N. quotes the the introduction to N.A. Jayawickrama's 2001 translation of the Sutta-Nipāta, where we are ominously told that any departure from the commentaries "can result in micchādiṭṭhi — heresy — from the orthodox point of view". (p. 70)  Jayawickrama's work is recent enough that it could have been influenced by (and built upon) the earlier work by K.R.N., but, in effect, Jayawickrama boasts that this is not the case, because he instead devotes himself to following the commentaries entirely, and eschewing any "…arbitrarily emended readings on the grounds of metre or parallel versions seen in versions posterior to Pali." (p. 70)  That may be as clear as mud, but what Jayawickrama is saying is that he's throwing away the conclusions of K.R.N. (as the merely "arbitrary" machinations of a secular academic!); he is also suggesting that you should trust his own translation because it is a more consistent expression of the commentarial tradition.

The type of metrical and etymological analysis that clutters up K.R.N.'s work may seem "arbitrary" (as Jayawickrama complains), but it isn't; it is simply evidence presented in a form that's hard to understand.  Conversely, the choice to disregard an explanation of a word because it relies on metrics or etymology would really be arbitrary.

The commentaries do provide evidence (and K.R.N. also makes extensive use of that evidence) --but the type of evidence involved is just as imperfect, confusing, and susceptible to multiple interpretations as the original text being commented upon.

There isn't a simple choice to be made between "traditionalism" and some competing "academic" approach.  Many translators invite their readers to imagine that there is such a choice (e.g., the controversy surrounding the "three lifetimes" interpretation of the 12 links, etc.) but this 2004 article by K.R.N. demonstrates that a translator saying "trust me, I follow the commentaries" doesn't have much more force than someone saying "trust me, I wear the robes of a Buddhist monk".

This is considered contentious (sometimes even religiously offensive) by the majority of people who care about Theravāda Buddhist texts.  I here refer to people who "care about" the texts, because, sadly, they're not the same people who actually read Pali: I have seen people explode at the suggestion that the authors of the commentaries were anything less than omniscient --however, in my own experience, people with this attitude do not actually read the primary sources for themselves.  Reading things (in their original language) tends to reveal the extent to which the words we have on paper are merely the work of human hands; in most cases, the authors have no affectation of infallibility, often enough expressing their doubts or offering more than one possibly-correct interpretation, and so on.

When a translator declares his devotion to the commentaries, it offers a false reassurance to the ordinary reader who can't scrutinize the source text.  This article by K.R.N. has many reminders of just how false this reassurance can be.  Certainly, an "ordinary reader" would be at a loss to explain the difference between H. Saddhatissa's (1985) translation of bhūnahu as "slanderous" and K.R.N.'s rendering "abortionist" (p. 81–2).  This is not a subtle difference of interpretation, and the commentary is vague enough for both sides to pretend it supports their case (although, frankly, it would be hard to K.R.N. to be wrong on this one --but he's the guy choosing the examples in this article). 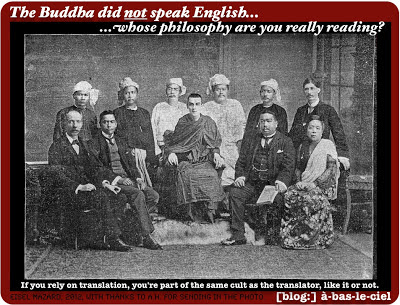 [Yes, I've used this illustration before, and I may be tempted to use it again…]

The article also demonstrates many of the problems with Theravāda studies that make the whole field seem opaque and inaccessible even to the people who are most passionate about it: there's a strange reliance on innuendo and "inside knowledge" that's quite counterproductive (and, in some ways, typically British).  At one point, K.R.N. suggests, archly, that a brief note on a particular word by one of the translators he is surveying "may prove surprising to his readers". (p. 79)  The "surprise" in question requires a comparative knowledge not only of multiple translations, but also of the variations between multiple editions of the (untranslated) Pali; yet also, apparently, we need to know an essay published only in German (Hinüber, 1982–3, "Zum Perfekt im Pāli") in order to detect the problem --or, at least, we need to know K.R.N.'s opinion about it (perhaps stated in a footnote to his own translation).  Such a discovery wouldn't be "surprising" to any of the readers of the poem in question: it would be completely invisible.

The contention (alluded to above as "surprising") concerns a sequence of letters that shows up in the Sinhalese [BJT] edition as -tvā ajjha-, but in other editions as -tvājjha-.  K.R.N. reads the -jjha- as obscuring a lexical -ja-, and this is not surprising in itself (it is even less surprising if you've studied traditional grammar, such as Kaccāyana).  The insinuation is that "his readers" should be surprised that Jayawickrama has dared to disregard K.R.N.'s conclusion on this point.  The whole controversy is stated in such an involuted and unclear matter that it is difficult to share the presumption that the more recent translator intentionally disregarded the work of the earlier one, and I wonder how few people alive today can even follow the controversy as it was here restated in 2004.  K.R.N. is providing evidence, but it is presented in a form that's difficult to read, and difficult to even see the significance of.

There is one other (unstated but obvious) area of competition between K.R.N. and his "rival" translators.  Although K.R.N.'s argument about (or against) commentarial traditionalism is both shrewd and strong, he admits that Jayawickrama's "translation is clear and easy to read". (p. 84)  He also praises Saddhatissa's translation for containing many "splendid phrases". (p. 72)  K.R.N.'s own work, by contrast, is barely comprehensible to other specialists, and his lack of influence on later translators (including Jayawickrama) may reflect the difficulty that people have in following his writing (be it translation or explanation).  That's a type of rivalry that has nothing to do with commentarial authority, nor religious authority, nor even with the strength of philological evidence: if you can't express your conclusions in a way that others find convincing (or at least clearly comprehensible) then your work will fall silent.  In general, the paucity of criticism of K.R.N.'s translation may reflect this peculiar "silence" (despite the hardbound covers and institutional imprimatur that mark his work out on the library shelves).

Unlike Bhikkhu Bodhi, I don't have the impression that K.R.N. is widely read by Buddhist monks or laypeople, and his publications are rarely reacted to by the general public or --relatively speaking-- by other specialists.  I say "relatively speaking" because K.R.N. has, in fact, published a significant percentage of all of the new research on Theravāda Buddhism in the last 50 years --and yet I neither see much criticism of it, nor other reactions to it of any kind.

To the best of my knowledge, K.R.N.'s first language is English, and yet he manages to produce translations that are nearly incomprehensible, even to other native speakers of English.  This is a subject that deserves criticism elsewhere, partly because the process of that criticism might draw out the useful observations (embedded in K.R.N.'s research) into some form that would be more easily understood by specialists and non-specialists alike.  If (if!) the objective of translation is to render a text that can be understood without comparative reading of the primary source, we may say that the leading edge of K.R.N.'s research still leaves us very far away from that goal.