The Only Statistic for Buddhism in the USA 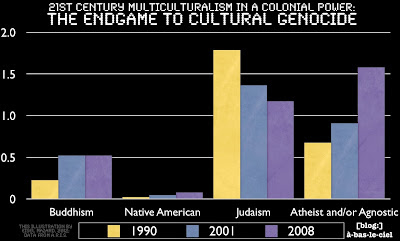 There are not many statistics worth knowing for Buddhism in the U.S.A., and I would like to offer a few notes on some of the limitations of the main statistic that's now available: the A.R.I.S., illustrated above.

One fact that leaps off of the chart here is that Buddhists now outnumber the adherents of all the religions native to North America combined: this is not something to be proud of.  In the context of a former British Colony, this is part of the endgame to cultural genocide.  I've included the statistic for just how endangered First Nations religiosity really is for just that reason: to keep this in the perspective of the genocidal social history of a country that has (lately) adopted a form of political pluralism that allows Buddhism to be preached, practiced, and develop institutions of mortar and brick.  Complaining that Buddhists are a small minority in the U.S. is not morally equivalent to complaining that Buddhists are a minority in South Korea (itself an interesting fact), nor is it morally equivalent to the situation of Buddhists in countries where their own religion had been indigenous prior to conquest (and persecution) by Islam.

In relation to the chart, I would quickly mention a few things about what the A.R.I.S. numbers do and do not tell us.

1. Most people would look at the increasing bar-chart and assume that the survey is capturing the opinions of increasing numbers of Buddhists born overseas: the opposite is true.  Amazingly, the 2001 A.R.I.S. interviewed zero persons born in China, zero persons born in India, and zero born in Thailand, Vietnam, Japan or Sri Lanka.  The random sample did manage to interview two persons born in Bolivia and two persons born in Venezuela, and it lists 7 as "other" (unspecified); from what I can see, however, there seem to be zero from traditionally Buddhist countries.  So, believe it or not, the A.R.I.S. numbers do not capture increasing immigrant Buddhism to the U.S.; the skew is in the opposite direction, and we're looking (disproportionately) at non-immigrant Buddhists in these charts.

2. Many of the most obvious types of distortion in the data relate to the method of "random number dialing" itself: these are telephone interviews, and for anyone wondering "how did they manage not to interview a single person born in China?", part of the answer may be that speakers of Chinese as a first language refused to participate in the interview at all.  Plenty of people will hang up on a voice they don't recognize; some immigrant groups may be especially unwilling to discuss politically-sensitive information over the telephone, in their second language, in these circumstances.

Telephone-interview data has other important sources of distortion: in 2001, 32.4% of the persons interviewed were "not employed", with a further 11.2% describing themselves as only employed part-time.  That is not a representative sample: it's a sample of the type of people who are available to answer the phone at 3 o'clock in the afternoon, and who choose not to hang up when they hear that this is about a survey.  Inevitably, this method will over-represent people who are retired, unemployed, or who are working as stay-at-home parents.

What makes this worse is that the skew is not consistent over time: normally, a distortion in a baseline study can be ignored (to some extent) as soon as we've got a sequence of studies to compare it to, because all stages of the study should reproduce the same distortion equally.  However, if there is one thing that has changed more dramatically than religion (in the period 1990 to 2008) it is the culture and technology of the telephone.

3. If I had access to the full data-set (and I don't, thus no cross-tabulations in SPSS) I would work only with the reports of the interviewed person's own religion: the number of interviews is 54,451 --and I would prefer to work strictly with the "self-described religion" of those 54,451 persons interviewed.  Instead, the data that A.R.I.S. has made public on their website tells us about the reported religion of 228,182 persons indirectly represented in the interviews.  In measuring religion by telephone, that's a problem.

I do not think that the persons interviewed will fairly represent the religions of their own spouses and children: instead, we're looking at a kind of skew arising from the degree of paternalism (and varying thresholds to conversion) in the different religions.

Hypothetically, if they had interviewed Bhikkhu Bodhi's own mother, she might have been confident in stating that her children were all the same religion that she was herself (but, in fact, her son had converted to Buddhism, and become a famous monk, etc. --something the parents did not approve of).  Some people will continue to describe you as your religion-of-birth no matter how you may insist that you have converted to another religion --and this tendency can be especially strong within the family unit (inasmuch as religion becomes a marker of shared ethnic identity more than a reflection of belief or personal choice).  The thresholds and boundaries are also very different for the various religions concerned: at what point would an apostate Catholic actually be described as "not Catholic" by his or her own father (in the context of a telephone survey)?  It's worth considering that the dotted lines involved are considerably different for Catholicism, Judaism, etc.; direct self-identification as "agnostic" is probably much less ambiguous than the question of whether or not your parents would report you as "agnostic", or even what your own spouse might say about you.

I've combined the numbers of atheists and agnostics into a single category for all three years (1990, 2001 and 2008) because they were combined as a single category in the first study (1990).  This total does not include those who describe themselves as having "no religion": the latter category is much larger than the first two.  In 2008, the study found 1,985 self-described agnostics, plus a further 1,621 self-described atheists; however, I have not treated this as the same category as the 30,427 other respondents who instead said that they have "no religion".

As some sort of disclaimer, I should say that I'm not a fan of studies of Buddhism in the U.S., and it's a relatively prolix literature, pioneered by Charles Preblish (from whom you can hear a one-hour lecture on Youtube, reviewing some of the changes in the field of study that he partly invented, over the course of the last few decades).  In many ways, the study of Buddhism in North America has become a pretext to study Buddhism in vitro, and in the medium of the English language only.  This entails all the same problems that I've complained about (when Anthropologists make comparative claims in comparing something known to something unknown) in my article "Problems of Canon and Reason"… and all of the problems I've complained about resulting from the lack of canonical literacy in both East and West (both in Cambodia and in Sri Lanka… what did you think I meant by "East and West"?)… and more.