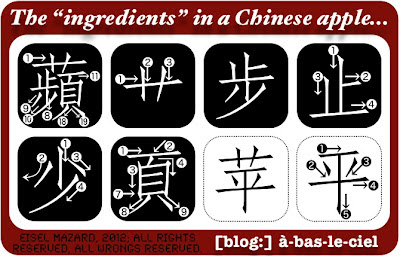 You should never eat apples in China.

There is almost no resemblance between the traditional form of píng (蘋) and its simplification (苹).  The only thing they have in common is the symbol at the top, i.e., the grass radical (艹) representing cǎo (艸).

After the first three strokes at the top (艹) the next component to be drawn is on the left-hand side, a miniature of the character bù (步) meaning, "a step".

The top half of this bù is zhǐ (止, most often meaning "stop" or "stillness").  Etymologically, the bottom half of the character is supposed to be a "mirror image" of the same underlying pictogram shown at the top (scil., a foot); this has been stylized into having a misleading resemblance to shǎo (少) meaning "few". [Thanks to P.M. for writing in on that one.]  Unfortunately, the misleading resemblance is re-enforced by the fact that the lexical radical for 少 is now 小 (in other words, in a conventional Chinese dictionary you will find 少 listed under the heading of 小).  Thus, contradicting the correct etymology, the modern glyph 步 contains 少 as an elaboration of 小 (whereas it should or could have a reversal of 止).

Despite the close resemblance, there is absolutely no relationship between 頁 and 貝; the etymology of 頁 is instead linked to 首, and all three are now categorized as separate radicals.

The radical appearing in píng is yè (頁), meaning "page" or "leaf" in modern parlance; etymologically, however, it is a picture of a person, or, more precisely, a human head on legs.  The same pictographic element for the head is preserved in other characters, not least of all shǒu (首, "head") and dào (道, no translation necessary).

In terms of etymology, the bottom half of yè (頁) appears in seal script as the same set of "legs" (儿) seen in various forms throughout the written language (兕, etc.); however, modern yè forms a single radical unto itself, and the legs have "withered away" somewhat.

Meanwhile, the look-alike character 貝 (bèi) shares none of these etymological aspects; the standard explanation is that it depicts a cowrie shell, although this does not explain the bottom half of the character very well.  Although some of the seal-script and oracle bones characters seem like attempts to render the shell itself, I wonder if some of the others might instead be images of the containers used to amass the ancient currency (looking like a bronze drum on legs).  If you think this is impossible, compare the historical forms of ding 鼎 (example 1, example 2, example 3, and a range of other examples); many of the precursors to modern 鼎 represented a bronze vessel with the same top half as 貝, and a few lines below it.

Somehow, with the indifferent passing of the centuries, circumstances have conspired to create a false resemblance between 頁 and 貝, and also between 少 and the lower "foot" of 步.

Having considered the ingredients, one should never eat apples in China.  Besides, it's far too many brushstrokes.
Posted by Eisel Mazard at 14:59