Ryerson's role in Canada's Slow Motion Genocide: What Exactly Did Egerton Ryerson Say About "The Indians"? 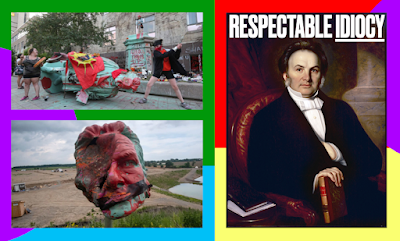 This is Egerton Ryerson writing about "the final solution" for Canada's indigenous people (First Nations, "American Indians", etc.) in 1847.

It is, therefore, necessary that the pupils should reside together.  Hence the necessity of providing for their domestic education, and for every part of their religious instruction.  The last, I conceive to be absolutely essential, not merely upon general Christian principles, but also upon the ground of what I may term Indian economics, as it is a fact established by numerous experiments, that the North American Indian cannot be civilized or preserved in a state of civilization (including habits of industry and sobriety) except in connection with, if not by the influence of, religious instruction and sentiment but of religious feelings.

The theory of a certain kind of educational philosophy is falsified in respect to the Indian: with him, nothing can be done to improve and elevate his character and condition without the aid of religious feeling.

The animating and controlling spirit of each industrial school [i.e., the establishments now known, in retrospect, as "residential schools"] should, therefore, in my opinion, be a religious one.  The religious culture in daily exercises and instruction should be a prominent object of intention… [and] sacred vocal music should form an important branch of their education.

In the contemplated industrial schools, I understand the end proposed to be the making of the pupils industrious farmers, and that learning is provided for and pursued only so far as it will contribute to that end.

[Educating them to be "carpenters, cabinet-makers, shoemakers, tailors, &c." would be too expensive and difficult to manage, therefore:] …the great object of industrial schools should be to fit the pupils for becoming working farmers and agricultural laborers, fortified, of course, by Christian principles, feelings and habits.

[The recommended relationship between government and "the religious denominations" that would operate the schools is then described in detail.]

The religious character of these contemplated schools and the religious influences which must pervade all departments of their immediate management, in order to ____ [sic., one word missing] their efficiency and permanent success, have been sufficiently remarked upon in the former part of this communication.

It was the piety and judgement and example of the late excellent Mr. de Fellenberg more than any code of rules that rendered his agricultural school for the poor at Hofwyl [now spelled Hofwil], near Berne, in Switzerland, a blessing to hundreds of peasant youth, and a model for all similar establishments.

[In fact, the Hofwil schools were already failing and shutting down at the time this document was written in 1847, i.e., soon after the death of the aforementioned Fellenberg in 1844.  Ryerson's awareness of the reputation these schools once had is apparently several decades out of date.  It does not occur to him to compare the budget for the Hofwil school (located in an aristocratic estate, and supported by aristocratic patronage) to the paltry sums the Canadian government would provide for the average "Rez" in Saskatchewan or Northern Ontario.  There were factors other than piety and faith that distinguished the Canadian example from the Swiss —and, as already mentioned, the seeming success of the Swiss example didn't last long.]

[8 to 12 hours per day of child labor?  Only 2 to 4 hours of actual education?  This was his vision for Canada's indigenous people, inspired by the Swiss model at Hofwil?]

[They should] rise at five in the summer [5:00 A.M.], attend to the police of the house, and have prayers and lessons in the school until seven, breakfast at seven, labor from eight until noon, dinner and intermission from twelve until one, labor from one until six, supper at six, lesson until eight, have prayers and retire to bed between eight and nine.  On Sunday the hours of rising, prayers, meals and retiring to bed [should be] the same as on other days.

In the intervals of public service, both in the morning and in the afternoon, they should have lessons in sacred music, the catechism, &c.

I think it would be beneficial to allow each pupil, say a penny or so per day, for work, allowing twelve hours' labor for a day's work; and paying him the sum thus earned at his leaving the school to set up for himself.

Of course, no age can be prescribed at present for the admission of pupils into the industrial schools.  In general, I think they should remain there from four to eight years…  [I cannot imagine any valid reason why the age of beginning and ending studies at such an institute would not be "prescribed"; perhaps he doesn't want to admit to himself the absurdity of "conscript labor" being applied to children at such a young age as his plan would entail.]

If I have omitted to notice any points which you think of importance, I will readily supply such omissions, and will be ready at any time to do what I can to promote the objects of these contemplated industrial schools.

I have the honor to be, sir, your obedient servant,

[Although I have not read the report myself, as early as 1858, allegedly, internal investigations and commissions (within "Indian Affairs") declared Ryerson's approach to be a failure.]