The Acquittal Rate in Japan, China & Canada (Is Anyone Ever "Not Guilty"?) 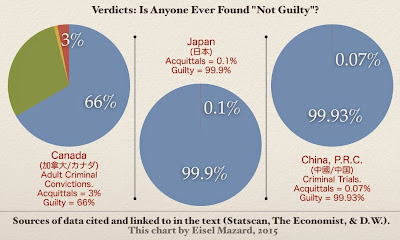 Very nearly nobody gets a "not guilty" verdict in China or Japan, and while some might appeal to "Cultural Determinism" to explain this institutional behavior, Taiwan reportedly has an acquittal rate of about 12%, by contrast --and Taiwan is a country with strong cultural links to both China and Japan.

Canada already sets a low rate of acquittal for comparison at 3%, but this may or may not be counterbalanced by a 29% rate of cases that are dismissed, stayed or withdrawn, rather than reaching either verdict (this is the green segment of the pie chart, with a 1% slice remaining for "other").  These stats are for 2008–9 (source), and closely comparable numbers are available for 2010–2011 (here).

The latest source to complain about mainland China's surreal statistics is Deutsche Welle: "…in 2013, only 825 out of an estimated 1,160,000 criminal defendants, or 0.07 percent, were acquitted." (Source)

Many different sources bemoan Japan's conviction rate (in excess of 99%), but I took this particular number from a 2007 condemnation of the Japanese legal system found in The Economist. (Source)

There has been one major change in Japan's criminal justice system since 2007: the introduction of trial by jury of a sort in 2009.  The Guardian uses the term "jury" in describing the new arrangement, (source) but Japan's new system of participating citizen judges (裁判員) is unique, and will require an equally unique mode of political evaluation.  Whether or not you link this factoid to Japan's cycle of forced confessions and police fabrication, Japan hasn't had a trial by jury since 1943; juries were abolished as part of the country's descent into authoritarianism, and weren't revived under U.S. occupation.

Japan's 0.1% rate of acquittal is rather too close to Communist China's rate of 0.07% --and rather too far from Taiwan's rate of 12% (or even Canada's rate of 3%).  If we can all admit that China's rate (0.07%) is indicative of a lack of fair trials and police procedures, it's inevitable that we regard the Japanese rate (0.1%) as an equally grave warning. 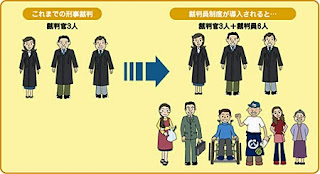