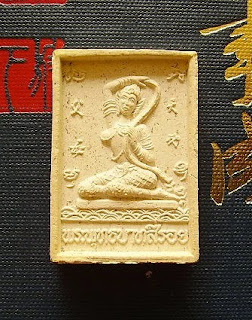 I received a request to make expansions to an already-long article.  I tried to make these as brief as possible, and in now glancing at them in isolation (i.e., without the rest of the article surrounding them), they seem as if they might make sense juxtaposed in a single blog.


How important is the example of Dharaṇi?  In North-Eastern Thailand, Hayashi Yukio observed the cult of Dharaṇi (here transliterated as Thornani) closely bound into the most intimate and ultimate of rituals, the treatment of the remains of the dead:

First [the mourners] gather before the ashes of the deceased and pour water […] onto them to cool them down.  At the same time, the phu liang and her siblings, (mostly women) place the tray of food beside the ashes and the eldest addresses the winyan of the deceased, and the earth goddess, Mae Thorani.  "We have come because today is the day for collecting the bones.  We will invite the monks and make merit. […] Mae Thorani, please take merit (to the deceased).  This is our merit (bun khong hao)." [Yukio Hayashi, 2003, Practical Buddhism among the Thai-Lao, p. 183]

If funeral rituals may be supposed to be central to religion (or at least to the anthropological evaluation of religion), Theravāda Buddhism is certainly not an exception to that rule.  In this example we see the goddess Dharaṇi taking on a crucial role in both the funeral rite and in what is commonly called "merit-transfer", acting as the intercessory deity conveying the merit to the dead.  This imagines her as having a place of tremendous power, moving between the realms of gods and men in the cosmology of Buddhism: "The merit transferred through these rituals […] is said to be delivered to the deceased after first being received by Mae Thorani or thewada (divinities) and notifying yommabun (officials who follow the Lord of Death [yom])."  That role, in the study of any religion, would be considered very important indeed, and yet we here see it assigned to a goddess whose name almost escaped notice in the Pali canon (and a name that, even where it does appear, most likely had its religious significance "reverse-engineered", as described above, or perhaps we might say "retconned", in the informal parlance of our times).

I can't say that I'm employing this example as part of a debate about folk Buddhism (vs. "Book Buddhism").  The notion of debate presumes that all parties have the capacity to be persuaded by the evidence; debates about abortion policy within the Republican Party are far more earnest than debates about the status of ancient texts within academia.  At the intersection of religion and politics, the human aptitude to be selectively blind to the evidence is developed to the highest levels of virtuosity.  In an old essay, I mentioned (briefly) the case of a professor "who felt that my work supported his own conclusion that the Pali canon contained no description of the Buddha as an historical figure at all", whereas my work supported the opposite conclusion. (Link here)  Although Pali scholars themselves are susceptible to selective blindness in their own way(s), those who cannot read Pali will simply offer any ideological justification imaginable for why it's unnecessary to learn to read the ancient sources.  There's no debate possible on that point: the written word is powerless against the self-righteousness of canonical illiterates --and they try to gain some support from the plurality of claims to canonical literacy (i.e., Pali vs. Chinese vs. Tibetan vs. echoes-of-Sanskrit, etc.), as if the possibility that more than one ancient language could be useful vindicates their position of reading none of them.

We have a very instructive example of this non-debate unfolding in the works of Martin Southwold (whom I critique at greater length in Chinese, here):


Southwold presents his own methodology in direct contrast to the earlier precedents of Richard Gombrich and Stanley Tambiah, both of whom explored questions surrounding the application of anthropology to Theravāda Buddhism in their early works.  Hayashi Yukio describes Tambiah's early writing (of the 1970s) as "attempt[ing] to integrate the methods of Indologists and anthropologists."  The resulting mixed-method proceeds from the crucial assumption that, "According to Tambiah, if it is texts that define Buddhism, then practices and concepts not found in those texts, even though they may evolve as the actions of Buddhists, belong to the domain of non-Buddhist behavior."  As an almost perfect antithesis, Southwold stated that he felt, "a rooted refusal to state, or even imply, that village Buddhism is not true Buddhism", in contrast to the views that Gombrich reported (and that Southwold admits he also heard himself, though mostly from middle-class informants), "that village Buddhism 'is corrupt', or 'is not true Buddhism', or 'is not really Buddhism at all'." 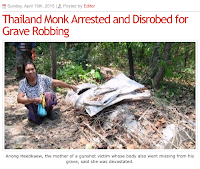 The problem here is not quite "a false dichotomy", but perhaps just the wrong dichotomy for the job: we can study "village Buddhism" with a warm, accepting, open-minded attitude while we remain acutely aware of how folklore differs from the more ancient, canonical texts.  Even if there were not so many centuries to separate the two, frankly, it would be worthwhile to remain aware of how popular religion differs from (unpopular) philosophy.  Conversely, if we're ignorant of the ancient texts, we cannot really remedy that ignorance by being (uncritically) flattering toward folk traditions, and refusing to regard them as corrupt (even if some of the adherents themselves do, etc.).

Either people believe there's a long-haired, near-naked earth-goddess who delivers "merit" from their funeral rituals to the spirits of the dead… or they don't.

Apart from the question of whether or not these beliefs can be vindicated by reason or evidence, we can ask (with an open mind) whether or not the given belief is consistent with the written record of Buddhist philosophy --and so on for all the other colorful local customs.

In some sense, I feel the whole debate is dishonest if the only possible outcome is an author deciding what his/her next essay is going to be about.  Real, earnest debates about religion (just like politics) have implications for how we're going to raise our own grandchildren, how we're going to bury our own grandparents, or how we're going to strive to "live the good life", in Aristotle's sense.  I don't think that any of the academic defenders of folklore-based Buddhism would want to teach their own children to believe in these rituals; by contrast, back when I was defending book-based Buddhism, I really, sincerely, wanted to encourage more people to learn Pali and read the books.
Posted by Eisel Mazard at 23:01