Gaps on the Map (more on "the silence of the internet") 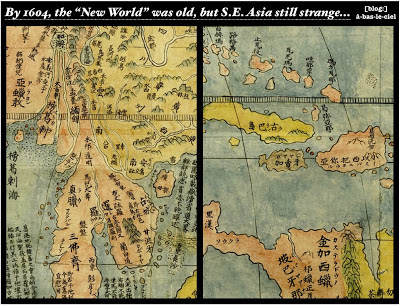 Although I'm glad that anyone read the article at all, I think that my former point was missed about looking at the (imperfect) map of the internet as "an indirect indication of real cultural change".

Looking at a map made in Japan in 1604, the difference in detail between one part of the world and another is telling: while Southeast Asia was a navigable distance from Japan (and there were permanent Japanese settlements in Southeast Asia in 1604), it's nevertheless very hard to make sense of the vague mess surrounding 緬甸 (Myanmar/Burma).  Meanwhile, the coastlines of the Caribbean are very clearly delineated, and are easily recognizable based on what we would expect to see on a 21st century map.  In 1604, the Caribbean was the focus of a great deal of the world's attention: it was where the "fast money" was being made in the slave trade and the sugar industry.  You can see, by contrast, that nobody was making much money in the vague jumble of rivers and mountains surrounding 緬甸 and 安南 --although it would have been much easier for the Japanese to map out the coastline of Southeast Asia.

The level of detail, care and the awareness of what is being depicted indirectly reflects the cultural and economic importance assigned to these places at that time.  Of course, this particular map is an interesting example, because it was made in Japan, but also reflects Japan's reliance (in 1604) on European sources of information (a European "worldview" in a very literal sense).  There's nothing inevitable about that dependency: in 1604, there were Japanese mercenaries in the employ of the King of Thailand (as good a source of information as Herodotus ever had) but the Japanese evidently did not have much interest in that view of the world.

What do we really learn from the declining significance of Buddhism in different online forums?  I've suggested that it is an indirect reflection of something significant, even if we can't be precise about what the decline in interest really is.  The point of  my former article was not that Yahoo groups is of unique importance, nor that the Google Ngram statistic is "a perfect map" of cultural change.  Conversely, why would we ignore them, as indicators of a change of some kind?

Note, for example, that from 1968 to 2008, the cultural currency of "vegetarian" was in decline [click here for figure 1]… but, by contrast, "vegan" was increasing in usage during the same period [click here for figure 2]… I think that is an interesting indication of something.  It certainly isn't a perfect map, but it indicates what people are paying attention to (and publishing books about).  Annoyingly, by the way, words are tracked separately with and without capitalization, setting "Vegans" against "vegans" [click here for figure 3].

These are the annoyances of relying on computer-automated research: believe it or not, the decline in interest in "Communism" (with a capital "C") was more rapid than the decline in interest in "communism" (lower-case) [click here for figure 6].  Again, this is an indirect indication of something: perhaps critics of Communism are more likely to leave the word without a capital letter and apologists are more likely to keep the capital letter, and perhaps people just stopped capitalizing the letter after some point at which it had become overly familiar as a noun.  One strange factoid spins out of this: 1974 was the first year that the lower-case spelling was more common than the capitalized form.

The Google Ngram system also separately tracks the most correct spelling Theravāda (with the second a marked as ā) but the number of uses of this spelling recorded is so infinitesimally small that we have no choice but to ignore it.

Are these charts completely meaningless?  No, I don't think so.  Generally, what we can see is that by 2008 the level of interest in Theravāda Buddhism was only slightly higher than it was in 1968; it briefly reached higher levels of interest for some of the years in-between, and then declined.


By contrast, it will be no surprise to anyone that there was a sudden increase in publications using the word "Islam" in the year 2001 [click here for figure 6].  Even before 2001, you may notice, the numbers for "Islam" are exponentially higher than "Theravada", and were increasingly higher than "Buddhism" over time.

In earlier blogicles, I've pointed out that Buddhism is much less popular than people seem to presume in (1) the U.S.A., (2) Canada, and even in (3) Taiwan.  I've also pointed out that statistics of this kind can sometimes (4) just be misleading junk.

At present, there is no easy or obvious assumption that Buddhism is "growing" or "flourishing".  Everywhere that I've done research in-the-field, the religion is shrinking; moreover, interest in the religion is declining faster than the brick-and-mortar institutions.  Buddhism certainly isn't flourishing in Cambodia, nor in Laos, nor in any part of China I've known.  The facile assumption that Buddhism would rapidly grow in the West has proven to be false, and, meanwhile, the religion is really struggling to survive in many of its homelands.  Although they're very imperfect maps of human activity, I do think that indications such as Google Ngram (and declining Buddhist blogging, etc.) reflect these changes.

Email ThisBlogThis!Share to TwitterShare to FacebookShare to Pinterest
Labels: the culture of communication, the politics of language, The Politics of Social Statistics, Theravada Buddhism
Newer Post Older Post Home