Buddhism and the Leaders of Public Opinion

As I've said some disparaging things about Schopenhauer lately,*¹ *² I'll open this article with his dictum that increasing awareness increases suffering: his illustration of this is a child with a skinned knee, who continues playing, oblivious to the pain, until an adult happens to expresses concern or pity, drawing attention to the injury, resulting in the child suddenly crying, even if the injury had taken place hours before.  His observation was that suffering arose not from things themselves, but from our awareness of them; intelligence therefore magnifies suffering through our capacity to reflect on injuries, both real and imaginary.  Although the label of "pessimism" is applied to Schopenhauer in many strange ways, on this particular point it could be more meaningfully associated with his name: if the basic premise of philosophy is that we can think our way out of our problems, and that intelligence reduces our suffering, we could say that Schopenhauer offers us the opposite theory.

Charles Johnson (inconsistently cited as Charles R. Johnson) is an American writer of both fiction and non-fiction, who is probably somewhere on the list of the most influential people to convert to Buddhism in the last century.  It would be nice if I could be a fan of his work.  I can't.  I know too much.  Reading what he has to say about Buddhism makes me wince; I know what's wrong with it, and it's a scraped knee that (once discovered) I can't ignore. 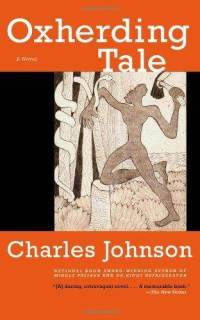 Although I studiously avoid reading anything published in Shambhala Sun, their interview with C.J. happens to be the best thing I've ever read from that magazine.  Here's a short quotation from C.J., illustrating why it is so difficult for me to be "a fan" of him, or almost any of the mainstream Buddhist leaders of public opinion:

"In his Nobel Prize acceptance speech, Dr. Martin Luther King said that civilization and violence are antithetical concepts. I link King with Buddhism because his statements are very close to the idea of dependant [sic] origination. He talked beautifully about how the world we live in is one of mutuality in which we are all equally dependant [sic] on each other."*³

I suppose if I had read that quotation about 15 years ago, I wouldn't have known how deeply flawed it was; but now I do know, and it's impossible to ignore.  C.J. isn't just an author of fiction: he's also a journalist and essayist, who lectures about the importance of journalistic research, fact-checking, ethics and other procedures (see the video, below).  He both aspires to and (quite reasonably) preaches a higher standard of research and writing, but he doesn't apply those standards to his knowledge of his own religion.  Journalism doesn't set a very high standard, but even so: there's a difference between reporting on religion and simply making things up.  For anyone who has actually studied (so called) "Dependent Origination" in the Buddhist Canon (or in any of the canons!), this short quotation (above) is a dead giveaway.

We don't expect Richard Gere to know what he's talking about because he's Richard Gere.  We don't expect Metta World Peace to know what he's talking about because he's Metta World Peace.  Do we expect anyone to know what they're talking about, or does Buddhism remain in a sort of D.I.Y. cultural sub-basement, where anyone can pretty much invent anything like a revelation from a dream?  Buddhism isn't based on revelation: if you want a religion in which people are free to invent anything and call it "the will of god", you should convert to pretty much any religion other than Buddhism.

I'm aware that almost nobody has bothered to read the original source texts describing the 12 links / "Dependent Origination" formula (not even in English apparently) and that's why I've written my own lengthy articles on the subject in the past.  However, when you're looking at an erudite leader of public opinion like C.J., the question deserves to be asked: why?  Why shouldn't he know what he's talking about?  Conversely, why is it that I'm in the position of wincing in agony whenever a public statement is made on behalf of Buddhism?  Why are these statements so often made by westerners who are balefully ignorant of the doctrines that they seem to preach?


I continue to receive messages from people who are profoundly uncomfortable with the concept of textual authority itself (and I suppose that's why they're writing to me).  Well, if you want to be part of a religion that doesn't require reading, then Buddhism is pretty bad choice for you.  If you want to be part of a modern intellectual movement that doesn't require reading (and doesn't require respect for the philology and problems of translation) then even "secularized" Buddhism is a bad choice for you.

Buddhism presumes a lot of reading, a lot of recitation, and a lot of memorization; and, if you become a monk, it also presumes knowing and obeying the writ of a lot of rules.  Within that tradition, being a critic or "freethinker" doesn't require less reading than being a conformist, it requires even more: within Buddhism, if you want to challenge the authority of the texts (or of the social status quo), you can't do so on the basis of ignorance of those texts, but only by knowing quite a lot above and beyond the writ of those texts.  I would say that one example of this type of challenge (as part of a process of cultural change) is Taiwan's ongoing attempt to "reinterpret" the status of women in Buddhism (釋昭慧 and her 廢除八敬法運動).  The fact that this debate has drawn Mahayanists into invoking (and debating) Theravāda textual sources is itself a indicative sign that you can't get beyond the writ of the ancient text without first showing that you know and understand it very thoroughly.  Even for people trying to "abolish" a certain set of rules (as per this Taiwanese example), ignorance of the source text is not an option; there are even higher expectations of their scholarship (or "jurisprudence") precisely because they want to challenge the received opinion (and plain writ) of the original texts.

Who is going to take up that kind of challenge?  We have to challenge ourselves.  Conversely, people who don't want to do the work need to have the humility and discipline to admit that they haven't done the reading, and can only defer to the opinions of those who have.

I sympathize with reformers like 釋昭慧, and I sympathize with self-made intellectuals like Charles Johnson, too, who are drawn to Buddhism for their own set of reasons, but never really get to grips with what Buddhism "is".  However, it is physically painful for me to read C.J.'s opinions: they're both misled and misleading.  In our culture, we have no equivalent to 釋昭慧; the leaders of public opinion are guys like Richard Gere and Metta World Peace.  They make C.J. seem profound by contrast.


[C.J.'s comments on journalism are at the end of part 6 and the start of part 7 of this video-set; click here to jump to the precise moment.]