On being Canadian (with a cameo from Michael Mahung) 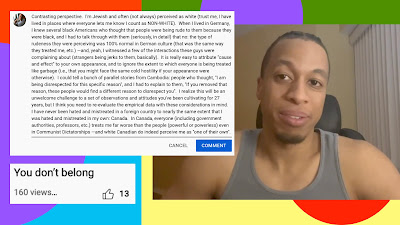 A link to his video (where I posted this comment) ensues at the bottom.

Contrasting perspective.  I'm Jewish and often (not always) perceived as white (trust me, I have lived in places where everyone lets me know I count as NON-WHITE).  When I lived in Germany, I knew several black Americans who thought that people were being rude to them because they were black, and I had to talk through with them (seriously, in detail) that no: the type of rudeness they were perceiving was 100% normal in German culture (that was the same way they treated me, etc.) —and, yeah, I witnessed a few of the interactions these guys were complaining about (strangers being jerks to them, basically).  It is really easy to attribute "cause and effect" to your own appearance, and to ignore the extent to which everyone is being treated like garbage (i.e., that you might face the same cold hostility if your appearance were otherwise).  I could tell a bunch of parallel stories from Cambodia: people who thought, "I am being disrespected for this specific reason", and I had to explain to them, "If you removed that reason, these people would find a different reason to disrespect you".  I realize this will be an unwelcome challenge to a set of observations and attitudes you've been cultivating for 27 years, but I think you need to re-evaluate the empirical data with these considerations in mind.  I have never been hated and mistreated in a foreign country to nearly the same extent that I was hated and mistreated in my own: Canada.  In Canada, everyone (including government authorities, professors, etc.) treats me far worse than the people (powerful or powerless) even in Communist Dictatorships —and white Canadians do indeed perceive me as "one of their own".