Calibrating measures of success (and failure) as a dissident intellectual. 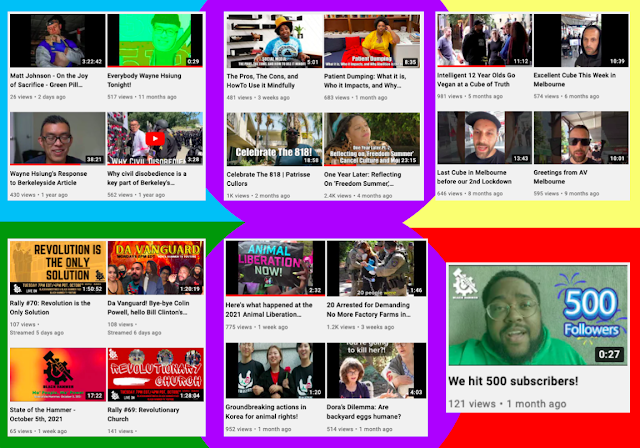 A lot of these people have ended up with a much smaller audience than myself… despite the fact that they really are pandering to the crowd (telling people whatever it is that they want to hear, etc.).

I certainly never imagined that I'd end up with a larger audience than Wayne Hsiung or Paul Bashir.

Both of them have had millions of dollars (in donations) pass through their hands in the last few years —and yet, really, nobody is interested in whatever it is they have to say next.

And I, also, am not interested in hearing what they have to say next, to be perfectly honest.

So, yes, it is interesting to try to calibrate your measurements for success and failure —when you're promoting a message as profoundly unpopular as I happen to be.

How many of these youtube channels do you recognize?  For the answers, see below.

2. Top-center: Patrice Cullors, co-founder of "BLM" ("Black Lives Matter") who has lately attracted controversy, due to the estimates of just how much money she has made out of her own position of political "advocacy" (and/or/as/vs leadership).

3. Top-right: Paul Bashir, founder and leader of "AV" ("Anonymous for the Voiceless")… who has indeed had some very public funding controversies, drawing attention to just how much money is involved (and how little organizations like his can show for it).

4. Bottom-left: "Black Hammer Organization", a Communist revolutionary front (that is not ashamed to ask for donations on the internet!) lately lampooned on my girlfriend's youtube channel: https://www.youtube.com/watch?v=8liMFIG6rBY

5. Bottom-center: the youtube channel of "DxE" proper ("Direct Action Everywhere") —drawing remarkably small numbers of viewers, despite the enormous sums of money they collect, and the enormous numbers of attendees (volunteers, activists, etc.) that they claim attend their events.