Is my channel "sexist"? A final reply to Fandar, and other faux feminists.

[I bothered to type out this reply because, frankly, I can imagine re-using it in future: it was Soycrates, not Fandar, who invented this line-of-attack against me, even before I had a youtube channel.  It was fallacious then, and it is still fallacious now.  But yes, I can imagine that I'll copy-and-paste this reply in future, if/when I receive a similar complaint.] 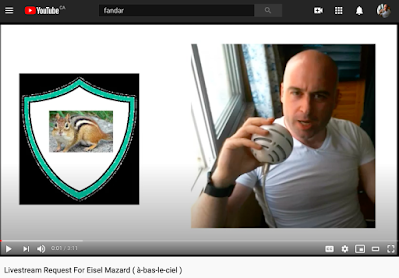 You are a very dishonest person, and a very vindictive person.

I know that you are unaware of the extent to which you're lying.  Perhaps this is an aspect of your mental disability / learning disability.  Perhaps not.

I am never going to reply to you again, but please just recognize how dishonest your statements are here.

There are two parts to this statement.

The first is not true, it has never been true, and you've never attempted to prove it (and you have never been willing to consider counter-arguments or counter-evidence, even when these have been presented to you, repeatedly).

The reality is that you (sincerely or insincerely) regard me as "obsessed" with criticizing attractive females because THOSE ARE THE ONLY VIDEOS YOU CHOOSE TO WATCH ON MY CHANNEL.

Did you watch any of my videos criticizing Bernie Sanders?

If you did watch those videos, would you assume I'm criticizing him because he's Jewish, or because the specific issues involved are substantive?  Did I criticize Vegan Gains because he was black?  No.

Did I criticize Unnatural Vegan because she's a woman?  No: I criticized her because I disagree with her about taking anti-depressants during pregnancy --and about a list of other significant issues (that are worth discussing as such).

The same is true about my criticism of all of these other people -- Yourofsky, Sanders, etc. etc.

There is no gender bias in these videos, and, on the contrary, many (MANY!) of these same videos discuss the unfairness of gender bias, and the extent to which women are unfairly judged for the same things men do, etc. etc. -- but you can't actually hear the thesis of any of the videos.

I do not think you are cynically pretending to misunderstand my videos: I think this is an aspect of your mental disability that you need to take seriously yourself.

Maybe if you took hand-written notes, or if you drew flow-charts of the arguments, you'd be able to understand what 99.9% of the viewers can understand without any assistance.

Many of my viewers are European: English is their second language, but they understand me much better than you do.

Recently, I have many many videos angrily criticizing and denouncing "Cosmic Skeptic" (some of these are really quite harsh and insulting toward the guy).  Do you genuinely believe that I'm "nicer" toward men than I am toward women?  Do you believe my criticism of "Cosmic Skeptic" would be different if he were "a young woman", instead of "a young man"?  There is absolutely no basis for the claim.  My channel has a huge quantity of evidence showing that I criticize men and women in the same way --and, also, I have lectures explicitly explaining that this is my method (and explaining why I think it's really important for other people to do so: explaining AT LENGTH that I think we should, each of us, make a philosophical commitment to offering women the same criticism as men, really treating them as equals, etc.).

There is absolutely no basis for saying, e.g., that I was more cruel to Unnatural Vegan than I was to Ted Carr or Gary Yourofsky or Vegan Gains (some of my criticisms of Richard are EXTREMELY harsh and vitriolic!); but even if there is some specific example of a woman I had criticized especially harshly (relative to Ted Carr, etc.) the reason for that harshness would be clear within the video: it would be BECAUSE OF the particular topic being dealt with.

The example of women taking anti-depressants during pregnancy is a good example.  It should be very obvious why I care about this issue so passionately.

With other examples, the reason for my being passionate/vitriolic may not be obvious to you, but, again, you have a serious mental disability: most of the audience knows why I'm angry, and what I'm angry about, when I display this kind of "theatricality" in my videos.

Indeed, I even do show this kind of theatricality toward Bernie Sanders (reproaching him for his attachment to the word "Sociallist", with satirical effect) --although I obviously do not hate Bernie Sanders.

This is really a case in which you need to reflect on how your own obsessive tendencies have shaped your perception of the world and others.

I have taken the time to explain your misperceptions repeatedly (because I pity you!) but you never can come to a conclusion: you never can find fault with yourself.

There is a second aspect of your claim here, that we should pause to address:

There is a difference between making a youtube video that offers substantive criticism (as I have done in disagreeing with Unnatural Vegan, etc. etc.) and what YOU have done in harassing me, threatening me, defaming me, etc.

You stated publicly (in comments posted on my social media) that nobody should hire me for a job because (you allege) I have been abusive toward my ex-wife and girlfriend: are you really incapable of perceiving the difference between what you have done, and the type of critique I've offered in my youtube videos?

Are you really incapable of seeing the difference between your repeated attempts to insult and denounce me on Instagram, within my Patreon, and in hundreds of emails sent to me privately, and the critique I offered of Unnatural Vegan's use of anti-depressants during pregnancy?

Can you fail to see the difference in the motives, in the methods, and in the outcomes?

If I did to Unnatural Vegan what you have done to me, would you perceive it as morally good, or morally bad?

If I made exactly the same comments about Unnatural Vegan (on her Instagram, on her social media, etc.) alleging that she's guilty of a crime and that nobody should hire her, etc., would you perceive that as "a good thing" that I had done, or "a bad thing"?  If I sent Unnatural Vegan hundreds of emails, insulting and harassing her, from dozens of different accounts, after she asked me to stop (as you have done to me) would you regard that as a good thing or a bad thing?

Recognize your own vindictive nature: recognize that you are the one at fault here, apologize, and stop.

Never write to me again.