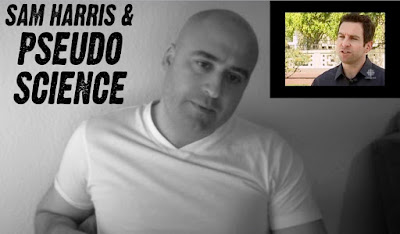 You may or may not have noticed that "professional skeptic" Sam Harris has turned his attention toward Buddhism, but --oddly-- his response to it is not skeptical at all.  Instead, he's also in the long tradition of scientistic thinkers who remain balefully ignorant of canonical Buddhism (or even of village Buddhist praxis) who is eager to tie together a knot of "cognitive" claims, and call it modern ("secular") meditation.

Another product of my prolific "jet-lagged in Göttingen" period (recorded at about 4:30 AM, local time), on Youtube: https://youtu.be/MmH-tma1upY

I can't help noticing (in "the lab report") that the meditating students (in contrast to the control group) took considerably more time to answer the questions: their "processing speed" is stated as 130.03 seconds, in contrast to 104.71 seconds for the non-meditators.  This suggests the very real possibility that the meditating students got SLIGHTLY better scores in the cognitive tests simply because they were taking SIGNIFICANTLY more time, i.e., perhaps because they were motivated to make a greater effort (i.e., as they knew they were engaged in a test to prove the efficacy of meditation, and they were selected as students who were already "interested in" meditation, i.e., quite likely motivated to make the effort).  This difference in "processing speed" (ca. 130 vs. 104 seconds) is a large gap, in contrast to the tiny difference of 10.88 vs. 10.84 in the "forward digit span", i.e., the measure of how well the student could remember and recite a sequence of (up to) 16 numbers.  Even this tiny difference in "cognitive measures" is confounded by the fact that the same test in reverse (the "backward digit span") had the opposite results: the meditators did worse than the non-meditators (6.58 vs. 6.72).  Although this is not a thorough critique of the report, there are already enough reasons stated here as to why we might expect someone like Sam Harris to treat such findings WITH SKEPTICISM, instead of citing the article (uncritically) as evidence that "Cultivating this quality of mind has been shown to […] improve cognitive function."

And the article that he's citing (and that I'm skeptical about) has its abstract here:
http://www.ncbi.nlm.nih.gov/pubmed/20363650?dopt=Citation

The implications of the other numbers seem baffling, if they have any validity at all.  The score assigned for "anger" (using the "Freiburg Mindfulness Inventory") dropped from 4.0 to 1.91 for the meditating students; however, for the non-meditators (the control group) it dropped from 3.8 to 1.2.  What, really, does this prove, indicate, or even insinuate?  Is meditation actually less effective at reducing anger than listening to J.R.R. Tolkein as an audiobook?  (That's not a joke: the control group listened to The Hobbit, instead of meditating.)

The score assigned for "confusion" (another interesting thing to quantify) dropped from 6.92 to 5.46 for the meditators, but for the non-meditators the change was from 6.6 to only 4.88!  Again, if these numbers prove anything, should we take these as indications of the value of NOT meditating?

For the meditators, "tension" (however that may be quantified) dropped from 8.5 to 2.91.  For the non-meditators?  The change was from 6.28 to only 2.6.  The implications would be baffling, if we really wanted to take this seriously as evidence of… well… anything at all.  And why would we?

I do not have unrealistic expectations here: not everyone can be an expert on everything, and Sam Harris is legitimately not an expert on Buddhism. However, everything I've seen from Sam on this subject (in writing and in podcasts) is really very shameful, and just reflects an extremely low standard of scrutiny (on Sam's part) even relative to what's readily available (via google) in terms of English-language academic scholarship on Buddhism (and/or Theravada meditation specifically).
Posted by Eisel Mazard at 21:18