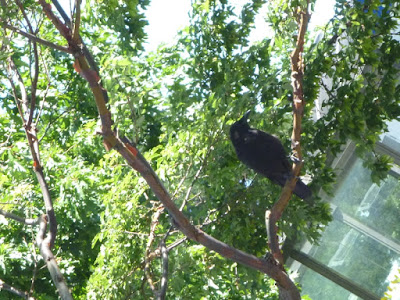 The bird behaved as if it were snatching hats from the heads of these pedestrians, who responded with various degrees of alarm and confusion.  Shop-owners put up a warning sign, struggling to describe what the danger really was: "Beware! Ravens dive-bombing!"  If I hadn't seen the bird doing this myself, I would have no idea what they meant by "dive-bombing".  The bird was thoroughly delighted with the way people would cower, etc., after it snatched at them this way, and would "laugh" (cawing) in the rafters, after each victim.  Eventually, I suppose, some civil servants captured the bird, and the sign was taken down (I don't know if they killed him/her, or if the bird was merely relocated). 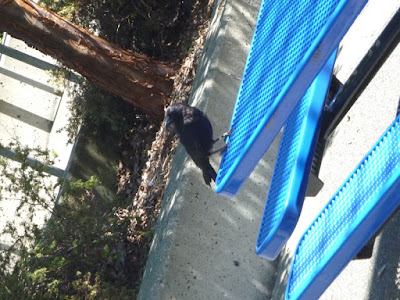 The raven shown in these pictures is a different specimen.  He/she tries to get food out of people waiting for the bus on the university campus.  To some extent, I think, the bird does this out of boredom.  Perhaps he/she will come up with ways to scare people into dropping their sandwiches.
Posted by Eisel Mazard at 18:33