In Japan, (Almost) Nobody is Ever "Not Guilty" 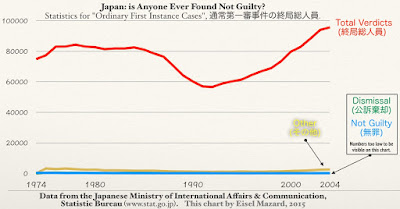 In an earlier post on this blog (click), I drew attention to the peculiar fact that the Japanese court system finds so few people not guilty that the acquittal rate seemingly cannot be measured as a percentage (secondary sources reported 99.9% conviction-rates, etc.).  However, I wasn't satisfied until I'd seen breakdown of the categories used by the Japanese government, as it wasn't clear to what extent "not guilty" (in an informal sense) might overlap with other categories in the data.  In Canada's case (as noted in my earlier blog-post) a very low rate of acquittal is counterbalanced to some extent by a significant number of cases "dismissed, stayed or withdrawn" (i.e., the later category is not equivalent to being acquitted, but it helps to explain the low rate of cases found "not guilty", as the Canadian system tends to dismiss cases in mid-trial).  Could that be the case for Japan?  No, evidently not. 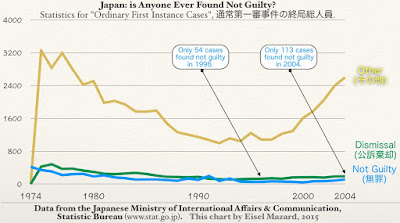 The primary-source data from the Japanese government affirms the grounds for concern that I saw in various secondary sources.  In 2004, only 113 persons were found "not guilty" (and this was a relatively high number, with just 54 persons acquitted in 1996, etc.); this number is indeed so low that it will not be visible in a pie chart, i.e., as a portion of the total number of verdicts (n = 95,699 in 2004).  Unlike the Canadian statistics, the number of dismissals is --likewise-- shockingly low.

Japan has a problem.  As my earlier post noted (click), I'm not alone in this concern: the currently-unfolding experiment with "lay judges" (裁判員) reflects widespread concern about the criminal justice system, among the general public, and within the civil service.  Nevertheless, Weeaboos send me hate-mail for daring to raise the issue.

It isn't clear how the implicit category of "Ordinary First Instance Cases" (noted at the top of the chart) skews the data; I don't know what falls into the category of being non-ordinary in this context (perhaps it just excludes retrials and appeals, but perhaps it excludes significantly more).  I have no footnote on the category of "Other" cases (shown as a yellow line); the data for this category starts in 1975, and, evidently, it comprises cases that are neither dismissals nor acquittals (nor convictions, etc., obviously).  In every country, some people die of old age prior to the conclusion of their trials, and some have their trials rendered moot by other circumstances (that are not recorded as dismissals), etc., so this category probably should not be considered in evaluating the rate of acquittal (i.e., it is probably irrelevant to the issues discussed here).
Posted by Eisel Mazard at 14:13