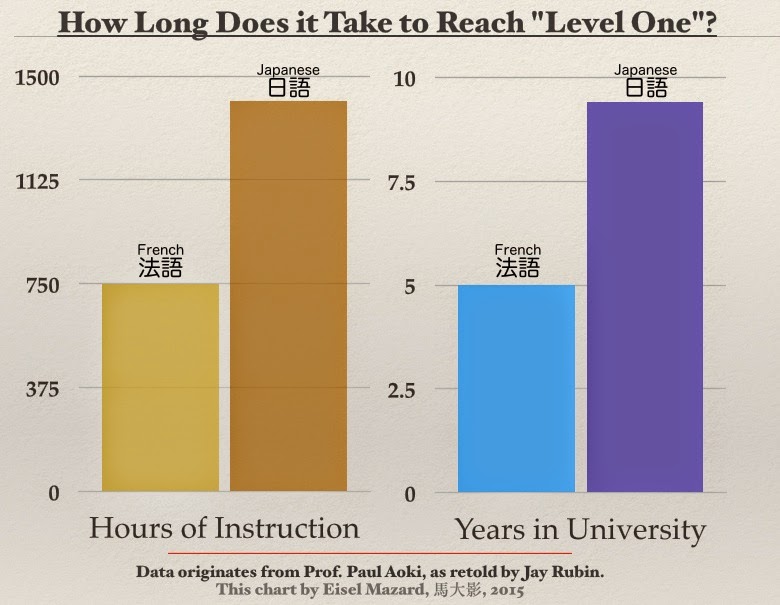 
The claim is that Japanese requires 1,410 hours of classroom instruction, although this is (apparently) based on the experience of U.S. government-employee classes, organized into 47 weeks, with 30 hours of work per week (i.e., not directly comparable to learning in a university setting).  The source is the introduction to Jay Rubin's Making Sense of Japanese, p. 17–18.  The numbers for Chinese are asserted to be the same as Japanese.  The source of the numbers is Prof. Paul Aoki, perhaps indirectly traceable to the U.S. government's I.L.R.

The earlier source I found estimated that 480 hours of instruction are required for an American university student to reach level 1 in Chinese language ability (click).  That works out to seven semesters (whereas Aoki/Rubin estimate 9.2 semesters, as shown in the chart above).  This university-based-estimate for Chinese seems to use a somewhat lower standard (for what achieving "Level 1" competence in a language means) than the one used (for both Japanese and Chinese) by Aoki/Rubin.  The U.S. government standard does, apparently, put significant emphasis on reading comprehension.  This definition of "Level 1" (Limited Working Proficiency) entails:


[They would have] Sufficient comprehension to read simple, authentic written material… on subjects within a familiar context.  [They would be] Able to read with some misunderstandings straightforward, familiar, factual material, but in general [would be] insufficiently experienced with the language to draw inferences directly from the linguistic aspects of the text.

The phrase "draw inferences directly" is, I presume, in implicit contrast to the process of translating something into English (either in one's head, or on paper), to then draw inferences indirectly.  In other words, this is the difference between "directly" reading Japanese (and thinking in Japanese), and "indirectly" reasoning through English.

By contrast, the "Level 1" attained in the 480 hour estimate for university students entails:


[That a student] would at the time of graduation be able to orally 'ask and answer simple questions involving areas of immediate need, leisure time activities and simple transactions.'" (Citation in my earlier post, here).

Being a full-time university student entails significant distractions, that I can't assume the government employees were facing in their 30-hour-per-week program (adding up to 1,410 hours).

I have to research and write tens of thousands of words (in original essays) per semester, along with studying for exams, attending lectures, etc., and these assignments are not related (in any way) to the content of practicing Japanese, Chinese, or any other language.  It isn't merely the case that I lack an immersion environment; instead, I'm actively immersed in a cycle of deadlines that detract from the process of language-learning (and so is everyone else on campus, I imagine).

Conversely, I have experience with learning an Asian language in immersion, with absolutely no teacher, no lessons, and very minimal resources (in terms of textbooks, audio recordings, etc.).  Many people praise that method as the "halcyon days of yore", but it requires a huge number of hours, a different kind of hard work, and, in the first few years, tends to produce fluency without accuracy.  I very rapidly learned to buy mangoes at the market in Lao, and, later, Cambodian, but so long as the mango-vendors could understand what I was saying, they weren't going to correct me (they're not language-educators).  You can make the same mistakes, again and again, for years, while the native speakers around you simply tolerate your comprehensible-but-incorrect use of the language.

Errors in listening and reading comprehension may remain invisible if you're not writing exams designed to catch you on them, or if you're not assisted by an instructor who is actually motivated to correct you.  I met a white man in Thailand who spoke the language fluently (after more than a decade there), but who had mistakenly believed for years that a word meaning "city hall" was the name of a town.  This was a landmark he referred to frequently in his day-to-day life, saying things like, "I'm going to the market in city hall".  When I tried to correct him, he didn't believe me, and at first tried to insist that there must be two separate words (homonyms), one of which was the name of this village, the other meaning "city hall".

That isn't the sort of error you make if you work through "Level 1" systematically, in a classroom-and-exam based environment (as time-consuming as that may be).