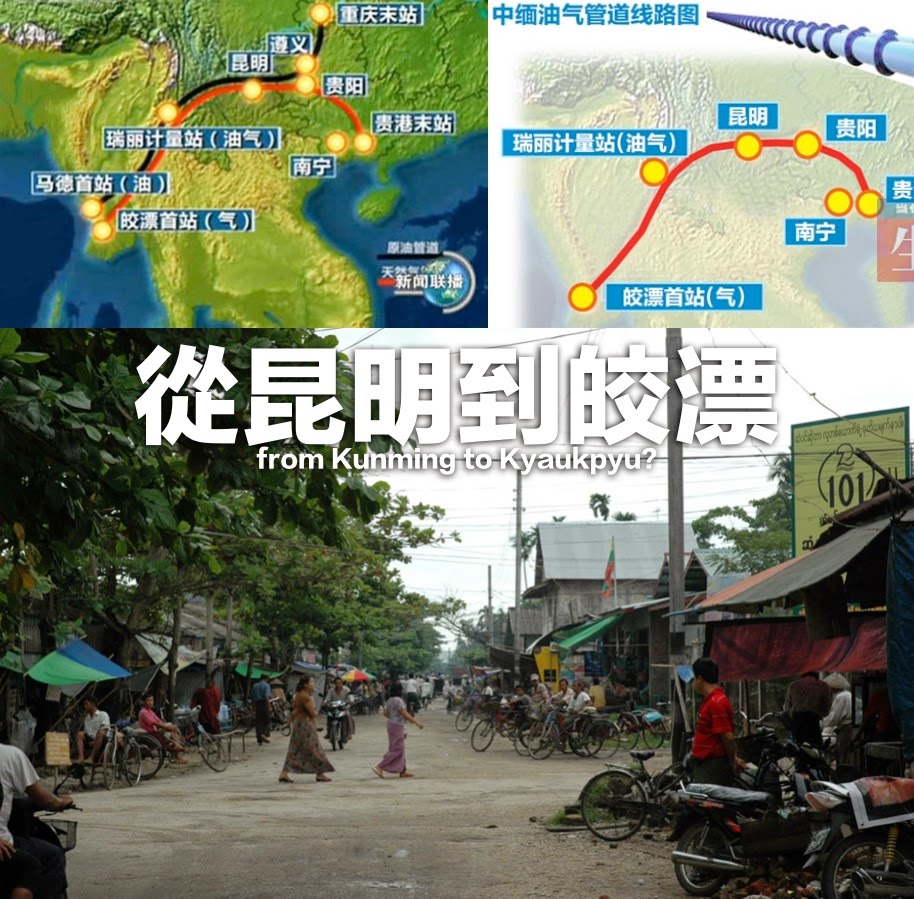 "Currently, a deep-sea port is under construction in Maday Island near Kyaukpyu; the plan is to transport crude oil, which is carried by tankers from the Middle East and Africa to Myanmar, through a pipeline to the Yunnan Province in China. In addition, a proposal has been made to convert the area around Kyaukpyu into a special economic zone (SEZ) connected to China by road and railway, in an attempt to make the area an industrial site in Myanmar." (Kudo, 2012)


The resemblance between the two grandiose projects is somewhat deeper than  the lines drawn on a map: in the 19th century, one of the main concerns for the British Empire was that the French would extend their own power in the region if the British failed to do so first.  This same spirit of competition-and-concern (leading to expansion in the name of self-defense) can be seen in reports from India's Institute for Defence Studies and Analyses. (Goswami, 2014)  In a direct "arms race", India has responded to the Chinese rebuilding of the port of Kyaukpyu by rebuilding the port of Sittwe. (Pant, 2009 p. 293)


"China and India are competing to develop the deep-water port of Sittwe, on Myanmar's Indian Ocean seaboard, with both harboring the hope of eventually building gas pipelines running from off shore fields in the Bay of Bengal." (Kaplan, p. 30)

The competition extends to railroads, also, as India has now vowed to connect its "treaty-port" in Sittwe to Mizoram, (Goldberg, 2014) in parallel to China's promise to build a railroad connecting Kyaukpyu to Kunming.
At their most hawkish, the Indian reports see the series of Chinese-controlled ports in Asia as the groundwork for future Chinese naval supremacy in the Indian ocean, i.e., with a military and political agenda, above and beyond their economic significance.  There has been "a growing realization that China is rapidly expanding its influence in the Indian Ocean region, something that many in the Indian strategic community feel would be detrimental to Indian interests in the long-term." (Pant, 2009, p. 282-283)  In the polite language of military consultancy, one such report concludes, "It may be exigent for India to take appropriate measures to preserve its vital interests, while there is time." (Khurana, 2008, p. 22)

There are also doves in this debate: Renaud Egreteau argues that India already has a substantial naval force near enough to Myanmar at their Port Blair base (in the Andaman Islands), and claims that India's perception of the Chinese threat has been much exaggerated in its reporting. (Egreteau, 2008, p. 952)  However, even this argument only goes so far as to argue for the "non-immediacy" of the threat, (ibidem) and is now slightly out-of-date, as it was published in 2008, i.e., the same year that Myanmar and China signed their major agreement pertaining to an offshore port for oil tankers (and pipelines and related infrastructure. (Holslag, 2010, p. 648) Egreteau's observations may have been accurate enough prior to this agreement, with the possibility that the hawks' worst expectations have gained some weight in the last few years (with construction of these major, international projects underway, some now completed).

India is not the only country to respond competitively to China's exclaves on the Myanmar coast.  Despite its avowed status as a post-colonial nation, Japan has rolled up its sleeves and established its own exclave in Thilawa, not far from Yangon. (Robinson, 2014)

As China's presence on the Myanmar coast is perceived as a threat by both India and Japan, one analyst claims that the resulting scenario has given impetus to an unlikely alliance between the latter two nations.  Rupakjyoti Borah regards China's series of extraterritorial ports (including Kyaukpyu) as spurring along an "emerging strategic relationship between India and Japan". (Borah, 2011 p. 25)  This alleged relationship includes a 2008 security accord, and a 2010 "joint statement" on their strategic partnership (Ibid. p. 26); thus far, however, it seems that this concord has only been demonstrated with some small-scale, anti-piracy maritime co-operation, but this could possibly be setting the groundwork for a more substantive military alliance in future.  Although the area occupied by Japanese interests in Thiwala is tiny, it could prove to be a foothold that draws Japan into considerable strategic (military and naval) entanglements.  Given the constraints imposed by their "pacifist" constitution, it is difficult to imagine how Japan would respond if India actually called for Japanese military support (under the terms of the aforementioned agreements) along the coast of Myanmar, or anywhere, for that matter.

While each of these potential colonial powers is concerned with the others' control of Myanmar's coastline, they may also be concerned about the possibility of American encroachment on their chessboard.  In 2013, an article by David Péneau surveyed five Chinese sources that are (from various perspectives) concerned about recent improvements in U.S.-Myanmar relations: could this possibly provide unwanted competition for China's (diplomatic and economic) position in the country? (Péneau, 2013, p. 76–78)  According to one of the articles surveyed, "[Myanmar's] closer relationship with the US is not explained by economic reasons alone but also by its desire to acquire some “strategic room to manoeuvre” (…战略回 旋余地) by multiplying its partners." (Ibid p. 77)  Another Chinese author in the same survey judges America's policy in cultivating friendship with Myanmar to be "a killing machine in disguise (…暗藏杀机)". (Ibidem)  Two of the Chinese authors comment on the issue in terms of Joseph Nye's "soft power" paradigm, with conclusions that are only slightly less alarmist than the above:

"The American policy also consists of a worrying dose of soft power that Zhou Xinyu observes “permeating” (shentou 渗透) Burmese society. This soft power, according to Li Yibo, potentially includes military links between the two countries. The invitation extended to Burma to observe the Golden Cobra military exercise between the US and Thailand is a token of this. For Li, the prospect of a military alliance between Burma and the US should worry China, because it would shut down the Burmese solution to the Malacca dilemma." (Ibidem)

The level of "defensive" concern in these Chinese sources is an interesting contrast to India's stated concern about China, especially given that the Chinese presence in Kyaukpyu is real, and the U.S. presence on the same coast remains merely hypothetical.

In its ancient sense, the meaning of colony is closer to the modern meaning of the word exclave: the colonies of ancient Greece (as described by Thucydides, etc.) were settlements and trading outposts established in foreign territory, but they did not lay claim to a huge dominion, nor did they try to make the surrounding population into citizens of Athens (whereas, by contrast, the native inhabitants of huge territories were declared to be British subjects with the annexation of their territory in the British Empire, and so on).  This sense of the word colony is still in modern use, and is still listed in dictionaries; it can be seen here and there on the map, as in the name of the German city of Cologne, simply meaning colony in this sense (formerly Colonia Agrippina).

Establishing exclaves is one form of colonialism, reflecting this older meaning of the word.  Although exclaves are much smaller than empires, they still satisfy most of the criteria that would be on a reasonable checklist of characteristics defining colonialism.  Inexorably, such colonies treat the citizens of the metropole as superior to the natives surrounding the exclave, with unequal rights, political and military control imposed by the colonizing power, and with economic functions defined in terms of the colonizing power's benefit, and so on.


The second sense of the term is the more prevalent in the modern era, and may describe a territory of any size ruled as a subordinate nation by the colonizing power (e.g., all of Sri Lanka, or all of Brazil, may be called one colony).  I am entirely willing to admit that some historical examples share features of both senses that I'm here ascribing to the word (e.g., the colonial project that transformed Ireland's Derry into England's Londonderry does not fit neatly into either category).

These two meanings of the word blend together naturally for a number of reasons: what begins as a series of small, foreign-controlled exclaves may lead to outright annexation, as demonstrated over a (relatively-gradual) process of centuries in the history of Sri Lanka.

Without any grand scheme for empire, a colonial power may seek to defend its investments with increasing demands for special rights (such as extraterritoriality), and feel the need to place their own troops outside of the exclave, especially where infrastructure such as railways and oil pipelines extend far beyond their "treaty port" or "special economic zone".  Of course, in the history of colonialism, one rarely needs to look too far for grandiose dreams of empire, even in areas where they were never realized, but it is worth noting that escalating intervention (and even de facto imperialism) can arise even in the absence of any strategy to subordinate the conquered nation as a colony (as was debatably the case, e.g., with the American conquest of the Philippines, starting in 1899, a colony soon relinquished with as little explanation offered as for why it was conquered).
With these considerations having been stated, it is not unreasonable to say that China, India and Japan could become embroiled in military actions to defend the investments they have already made in Myanmar.  In 2010, the cost of China's oil pipeline alone was estimated at $2.5 billion (U.S. dollars). (Haacke, 2010, p. 120)  It is reasonable to imagine that China might be motivated to intercede (militarily) in order to defend that pipeline, either with their navy, at the harbor, or with troops at any given point of its land route through Myanmar.

It is also reasonable to suggest that Myanmar's sovereignty is being eroded with the establishment of these exclaves, even in the absence of any guiding "dream of empire" on the part of the foreign powers competing to control the coastline.  This is reflected (in a familiar pattern) with the asymmetry of the financial rewards for the investments made by the foreign powers.  In 2013, a reporter on the ground in Kyaukpyu stated that one of the villages connected to the oil project was employing only 400 natives, in contrast to 1,400 Chinese. (Robinson, 2013)  with this ratio of employees, nobody could imagine the project was operating for the economic benefit of Myanmar (rather, it is clearly operating as a Chinese exclave).  In the context of a village outside of Kyaukpyu, a population of over 1,400 Chinese is already "a colony" in one sense of the term; it remains to be seen if this will result in colonization in the other sense of the term --i.e., the subordination or subsumption of Myanmar.