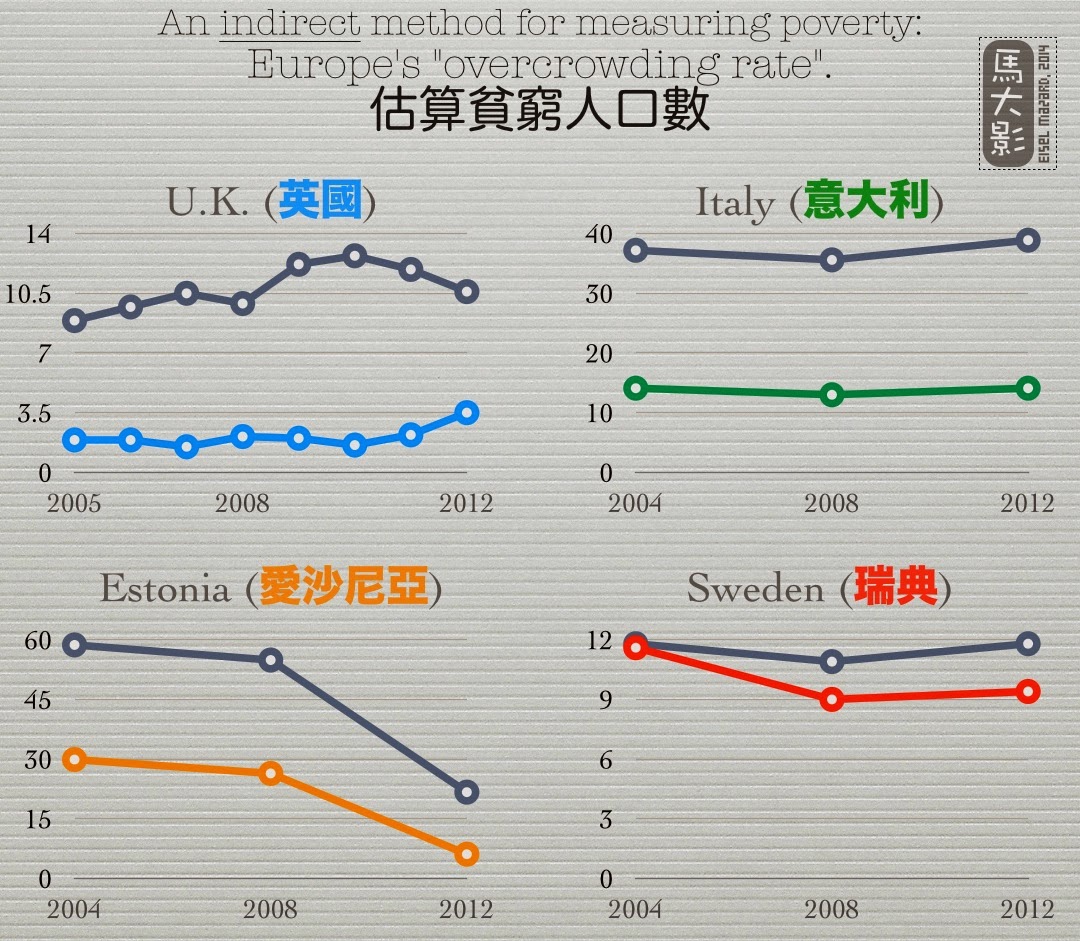 The overcrowding rate is an extremely useful statistic, even though the subjective notion of what "overcrowding" really means will differ from one culture to the next (and baseline values will reflect the distribution of urban-vs.-rural population, the availability of cheap rental housing, and numerous other factors unique to each milieu).

I've disaggregated the data (for each country) into two lines: (i) the darker line shows the overcrowding rate for families with children, and (ii) the brightly-colored line shows the overcrowding rate for households without children.  So, at a glance, we can see that the direction of the change is very different for each of the countries shown (in the last few years), and, also, we can see that the gap between the two lines is different in each case.


Of course, the numbers on the y-axis are significantly different from one country to the next, too (and this is yet another reason not to cram the stats into a single chart).

As with many other culturally correlative statistics, the overcrowding rate is only meaningful when compared to itself (for the same country) over time.  However, with this caveat stated, it is extremely important: the numerical rate may not have the same significance in Estonia as it does in Italy, but the difference in the direction of the change (when looking at Estonia vs. Italy) is of self-evident value.

In the unique case of Estonia, the overcrowding rate provides firm evidence that the economic changes in that country are neither shallow nor short-term (and in Estonia alone the changes we're talking about are positive, with some debate as to how positive they may be).

In other cases, such as Greece, the fact that the overcrowding rate declined during a period of absurdly high unemployment may indicate that people had given up on the possibility of finding work in the cities and relocated to rural areas with cheaper housing, or, often enough, citizens abandoned the country entirely.


Placed side-by-side with unemployment and migration statistics, the overcrowding rate gives a much stronger sense of poverty (at a national scale, over time) than many of the statistics commonly seen in newspapers.  It is also one of the very few housing statistics that governments can collect consistently (whereas the fine print on measurements of housing prices and availability are bewildering, as it is extremely difficult for researchers to compensate for even the simplest differences in location and size when assigning a comparable value; thus, there is no easy equivalent to the consumer price index for housing, and even measures of vacancy are tricky).

The overcrowding rate is now a "standard" stat for the E.U., but… perhaps nowhere else (just yet).